JNU student leader and activist Shehla Rashid announced her joining of Faesal's party on the occasion. 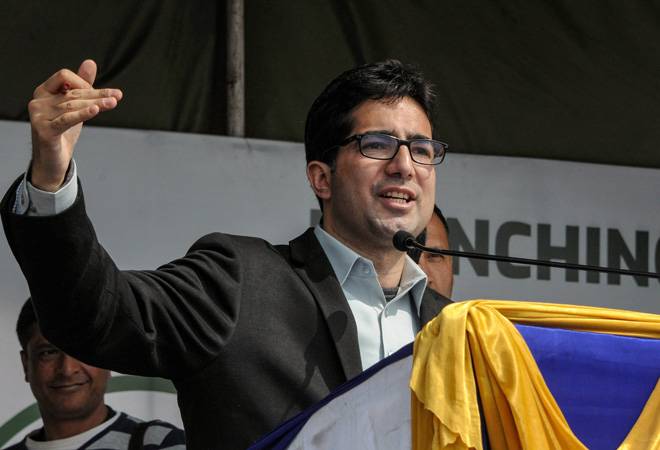 Former IAS officer Shah Faesal Sunday launched his political outfit - Jammu and Kashmir Peoples' Movement (JKPM) - in Srinagar, promising a youth-oriented politics and to become a voice to help bridge the gap between the state and the Centre and India and Pakistan.

Hundreds of people, from most parts of the state, turned up at Gindun Ground in the Rajbagh area of the summer capital here to participate in the launch ceremony of his party.

Giving details about his party's vision, Faesal, who resigned from the Indian Administrative Service to protest the "unabated killings in Kashmir and marginalisation of Indian Muslims", said the JKPM would pursue the peaceful resolution of the Kashmir issue according to the wishes and aspirations of the people of the state.

"Our party shall pursue peaceful resolution of the Kashmir problem as per the will and aspirations of the people of Jammu and Kashmir and with dignity and respect. As a mainstream political party, I want to make it clear to you that the solution to Kashmir issue finally is an issue between the two nations (India and Pakistan).

"I do not say there will be an overnight miracle, the road ahead is long and we can facilitate and become a voice to bridge the gap between the two countries as well as between Delhi and Srinagar," he said in his over 20-minute speech.

JNU student leader and activist Shehla Rashid announced her joining of Faesal's party on the occasion.

Faesal said when he joined the IAS he had thought peace can be achieved in the state through development.

"My thinking was that if we provide roads, schools, water supply, then perhaps there will be peace. (But), after ten years, I realised that till the youth here is disillusioned, till there is bloodshed here, till the chastity of our mothers and sisters is not protected and till the new generation keeps living in uncertainty, nothing will be achieved by way of development here," he said.

The 2010-batch UPSC topper said he was "surprised" to see the kind of politics done by the politicians in the state since the last 60-70 years.

"I will tell you honestly that I thought of joining a specific party. I met the leaders of that party and they give me immense respect, which I accept and am thankful about. I was in talks with other two parties, but in the meanwhile, I received a lot of abuses," he said, without naming the parties.

Faesal said the anger and outrage shown by the people especially the youth "opened my eyes".

Since resigning from the service, Faesal had been interacting with young achievers to solicit their support for his initiative of corruption-free, clean and transparent politics in the state.

He had also launched a crowdfunding campaign in last week of January to support his initiative.

The former bureaucrat, who resigned from the government service in January this year, said deciding on what to do next was a decision "difficult" than resigning from the IAS.

"My family supported me in this decision. Resigning from IAS was easy, but making this choice when I was getting the Parliament seat on a platter and I had to leave it - was very difficult. Your support and my conscience compelled me to launch a new platform for the youth of the state.

"And now that I am doing this, the same people - who used to invite me into their party fold are now alleging that this is a ploy of the BJP, the RSS and the Central government. I tell them that only time will tell if it is a ploy and how much big," he said.

Faesal said the intention of his party was to give a new politics to the state "which has seen only miseries since the last 70 years".

"This party is not a region or religion specific. People from Jammu, Ladakh or Rajouri-Poonch are my brothers and from this stage, I want to send them a message of friendship. Our politics is incomplete without the dignified return of Kashmiri Pandits," he said.

Faesal said his party's objective is to leverage the geo-strategic position of J&K to make it the gateway to Central Asia as 'Look Up-North' centre for the subcontinent.

"The party shall work towards reviving the centrality of Jammu and Kashmir state to the ancient Silk Route civilisation so that Jammu and Kashmir can re-emerge as a corridor of peace between various South Asian neighbours," he said.