Asian countries will see the fastest growth in ultra-high-net-worth individual (UHNWIs,) defined as those with net assets of $30 million or more, in the period between 2018 and 2023. Echoing the trend seen in previous editions of the report, Asian countries will also see the fastest growth in ultra-high-net-worth individual (UHNWIs), defined as those with net assets of $30 million or more, in the period between 2018 and 2023. Of the 59 countries and territories in Knight Frank's forecasts, 8 of the top ten countries by future growth are in Asia, with Ukraine and Romania taking the remaining spots. India leads with 39 per cent growth, followed by the Philippines (38 per cent) and China (35 per cent). Despite the election uncertainties of 2019, India's wealth is expected to charge ahead over the next five years with the number of UHNWIs rising to 2,697. India's UHNWI population grew by 24 per cent in the last 5 years (2014-18) and accounts for 1,947 UHNWIs, whose net worth was over $30 million in 2018. According to the report two-thirds of the world's UHNWIs saw their wealth increase in 2018. The UHNWIs in India grew by 7 per cent in 2017 to 2018 well above the global average (4 per cent) and the Asia average (3 per cent). 61 per cent of Indian UHNWIs expect their wealth to increase in 2019 showing confidence in the economic growth of the country. 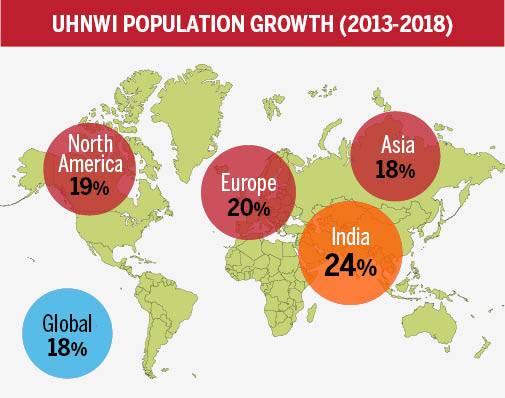 Shishir Baijal, Chairman and Managing Director, Knight Frank India, says,"63 per cent of the world's ultra-high-net-worth individuals saw an exponential surge in their wealth in 2018, clearly showcasing the economic optimism around the globe. Despite a slide in the Indian rupee against the US dollar, India witnessed a growth in UHNWIs due to heightened economic activity and strong performance of equity markets. Not surprisingly, the growth has been observed in gateway markets of Mumbai and Delhi by 38 per cent. However, Bengaluru is first amongst the top five eye-catching 'cities of the future' based on their future economic potential predicted to witness 40 per cent growth of UHNWIs over the next five years. Indians will continue to remain optimistic in their wealth creation in 2019 as well."