This is not the first time the Lonar lake has changed its colour, according to scientists, but its more glaring this time 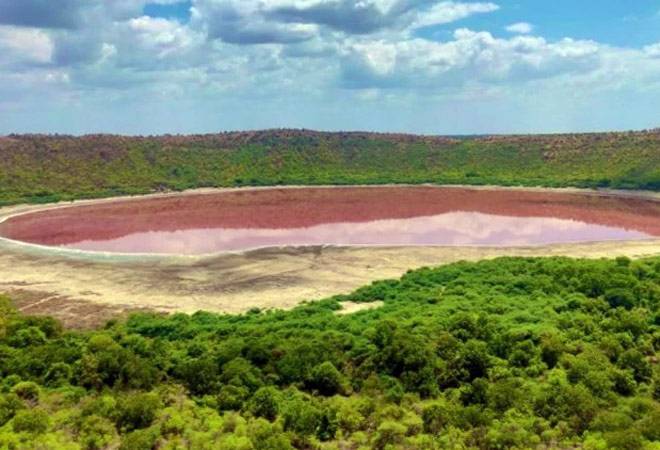 Lonar lake was formed (50,000 years ago) when a meteorite crashed into Earth creating a 113-hectare crater

Maharashtra's famous Lonar crater lake in Buldhana district has mysteriously changed its colour to pink, prompting scientists to investigate the puzzling cause.

The lake is 50,000 years old and normally appears to have a greenish hue. The sudden colour change has sparked a lot of theories and concerns alike. The lake was formed when a meteorite crashed into Earth creating a 113-hectare crater, which is today popularly known as Lonar crater or Lonar lake.

This is however not the first time the lake has changed its colour, according to scientists, but its more glaring this time. The lagoon is said to be highly alkaline in nature with a pH of 10.5, and extraordinarily stands out for its high levels of salinity.

An IIT Bombay study discovered minerals in the lake soil similar to the ones found in moon rock brought back during Apollo Program.

The lake was first discovered by JE Alexander in 1823.

Buldhana district collector Suman Rawat Chandra posted a picture of the lake on Twitter on Wednesday.

Maharashtra Tourism Development Corporation too posted the photos of the strange phenomenon on its official Twitter handle. "From Green to Pink; Lonar Crater Lake has changed its colour," it said.

A study conducted by IIT Bombay found that the minerals, in the lake soil, are very similar to the minerals found in moon rock brought back during Apollo Program... #LonarLakepic.twitter.com/FNQa4QBOZS

Here are some of the Twitter posts with pictures of Lonar lake:-

This is the real pic of Lonar Sarovar clicked yesterday using normal camera on mobile.

This Lonar crater is a National Geographic Heritage Monument and I have visited this site atleast 50 times before but it was never that beautiful.

It is situated in Buldana District of MH. pic.twitter.com/Bi69zPfwpb

From Green to Pink; Lonar Crater Lake has changed its colour.#LonarLake#LonarCrater#SaltWaterLake#MaharashtraTourismpic.twitter.com/2HmvOiyr6h