Criticised for its safety norms and fatal derailment incidents, the Indian Railways seemed to have had its priorities right. According to the railways ministry, the public sector transporter has recorded just 73 accidents in 2017-18 - the lowest in 35 years - and down 29 per cent from 104 in 2016-17.

In a report by The Indian Express, Railway Board Chairman Ashwani Lohani said the number of accidents had dipped following strong emphasis on safety. Besides, the newly-introduced voluntary reporting system allows each and every railway employee to report lapses in the safety system. This has helped us immensely, he added. "We are depending on our new system and if you see, there is immense emphasis on safety everywhere," he said.

For the first time, in 1968-69, the number of railway accidents fell to three digits to 908 from 1,111 in fiscal year. Since then, it has remained in sub-1,000 limits.
Consequential train accidents are mishaps that have serious repercussions in terms of loss of human life, injury and damage to railway property or interruption in rail traffic. 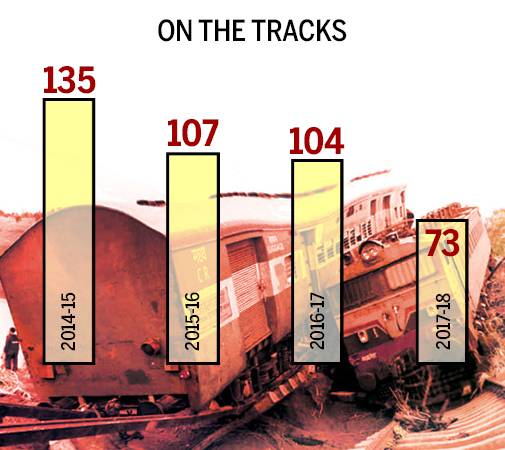 Other numbers
Lohani said that only 39 derailments were recorded in 2017-18 as compared to the 68 derailments in the last fiscal year.
The number of accidents at unmanned level crossings have also come down from 15 in 2016-17 to just eight.

Safety high on agenda
Railway Minister Piyush Goyal, after his induction in September 2017, had put railway safety as his top priority. A total of Rs. 5, 334 crore was earmarked to improve safety measure in the year 2017-18 for the repair works, maintenance and track inspection.
An amount of Rs 7,267 crore has been allocated for the year 2018-19 for safety and maintenance.
Indian Railways is currently working on the upgradation of railway tracks, elimination of unmanned level crossings, replacement of traditional Integral Coach Factory (ICF) coaches with Linke Hofmann Busch coaches, rolling out of new signalling systems, speed restrictions in a number of areas, among others.

India at risk of food shortage due to climate change: Study