This start-up is making life easier for differently-abled, senior citizens

Launched by Romeo Ravva, Rrajesh Patil and Bennet D'cunha in 2015, Ezy Mov was started as a wheelchair taxi service for the differently-abled. 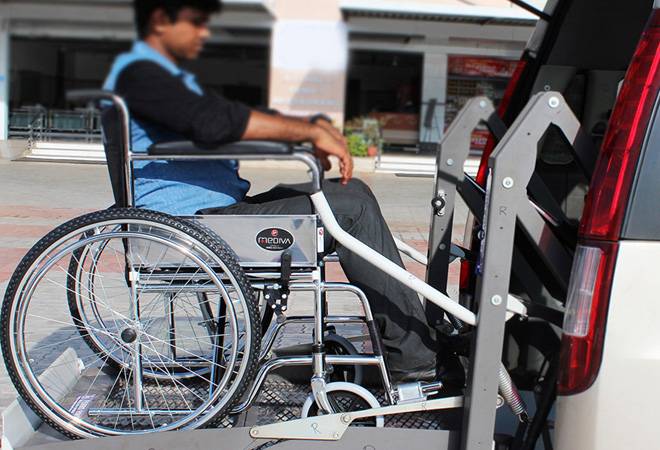 Jasmina Khanna, 46, a Senior Systems Engineer with Syntel is a wheelchair user. She always had a personal driver and a car to ferry her to work and back home. However, several parties and family get-togethers were mostly missed or kept limited. The reason being as a wheelchair user, getting in and out of the car was a challenge. "I had to be physically lifted, something that was not only uncomfortable but also unseemly."

But that was until a year back. Her driver is gone and the car is back in the garage. She is now a regular user of wheelchair taxi service Ezy Mov Solution. "I can get in and out of the wheelchair cab by myself without any help from strangers. It helps me move around with dignity. I also feel more independent." As a result, she says, she has started socialising a lot more.

Launched by Romeo Ravva, Rrajesh Patil and Bennet D'cunha in 2015, Ezy Mov was started as a wheelchair taxi service for the differently-abled.

What they realized over the years was not only people with disabilities but also elderly were using their services more often. They comprise 90 per cent of their customer base. Now, their 3,500 customers can travel and run errands independently.

They do 4,500 trips per month, out of which, 60 per cent are to visit the doctor, 25 per cent are social visits and rest is pick and drop from the airport.

Their fleet of 20 wheelchair taxis can be booked through their website or their 24x7 call centre.

D'cunha says, "We are always fully booked the previous day. We struggle to meet all the requests." He adds, each metro needs at least 200-300 such cabs to meet the demand.

However, the problem with increasing the fleet is the high cost of accessible vehicles. For the last one and half years, they have been using Tata Winger in which a wheelchair easily fits. "We would just install the hydraulic lift and wheelchair restraint systems to hold the wheelchair and the occupant. However, this plug and play model is quite expensive." The cost of modifying Tata Winger is Rs 15 lakhs, mainly due to the imported hydraulic lift.

To bring the cost down, they have been working on a prototype on Maruti Eco for which they have got the permission from the company to increase its height and modify the rear seat. They have also developed a hydraulic lift in-house. This has brought down the cost of the vehicle to Rs 9 lakhs.

As a result, the cost to ride an EzyMov cab is Rs 25/km, almost 20-30 per cent expensive than regular cab aggregators. "The idea is to bring the travel cost down to Rs 18/km."

"We are also looking at partnering with organisations which can fund the modification of cars as a part of their CSR," he says. They have also tied up with Hinduja Hospital and Reliance Hospital to bring their patients for health checkups.

What's new is they are getting demand from people to make their personal vehicles accessible. "We have modified all kinds of cars, from the high-end Audi to a Wagon R," says D'cunha. They modify on average seven-eight cars a month. "This business has better margins and we are surviving because of that."

The founders had started the firm with a personal investment of Rs 2.5 crore.

Currently plying only in Mumbai, Ezy Mov plans to start their services in Goa by end of the year and expand to all the metros by 2019.

Other people who won this award were Amar Jain, Associate (Equity Capital Market) at law firm Cyril Amarchand Mangaldas who has been instrumental in issuance of Housing Loans to persons with disabilities under the National Housing Bank. "Even though people with disabilities would meet the criteria to get a loan, their application was rejected." He then wrote to them to get them issue a circular on how to deal with such cases. He is now working with several regulators on policy changes to make income tax filing, telecom devices and broadcasting accessible.

Vishal Kapoor, Chief Design Officer of Future Enterprise is another winner who was instrumental in redesigning 55 stores of Big Bazaar to be made accessible to customers with vision impairment, hard of hearing, those with intellectual disability and physical disability.

Investing in mutual funds may soon get cheaper by 25%