WEF 2021: Dharmendra Pradhan says it's been policy of government to focus on reskilling and upskilling; Infosys CEO Salil Parekh says Indian tech major is making sure it's doing its bit by offering its new skilling platform to be used by all its workers and students across India 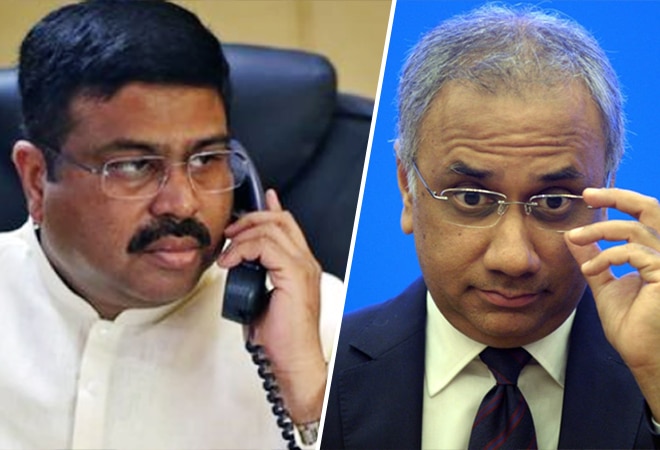 The responsibility of skilling, reskilling, and upskilling the workforce in the post-pandemic world lies not just with governments but employees and companies as well, experts during the World Economic Forum's (WEF) 'skilling the workforce' programme said. The WEF's Future of Jobs Report 2020 states that 43 per cent of the businesses surveyed are set to reduce their workforce, and 34 percent plan to expand their workforce due to technology integration. During the panel discussion, experts examined how businesses and governments can work together to retrain workers and redeploy them towards jobs of the future.

On lessons learnt from the Covid-19 hit year and where the global workforce stands now,  Alain Dehaze, Chief Executive Officer, Adecco Group AG, said skilling, reskilling and upskilling have become even more crucial in the post-pandemic world. "What is even more important is individuals, governments and companies, all have to work in tripartite engagement. Everybody should be aware that it's their responsibility to stay attractive. After 10 years, they will become obsolete in the labour market. It's a reality. Employers also must invest in employability. They should have a clear vision regarding the workforce. Otherwise, they will lose their attractiveness."

He said financials were speaking for themselves. According to a survey, said Dehaze, reskilling costs $35,000 to an employer while removing him or her and hiring the other costs around $100,000. "Governments also have to create a framework, in which incentives will have to be put in place to reward those who reskill employees. This should be taken as an investment not cost. Many governments are putting $100 billion to support the local economy, but I think this is short-term. Why should we not use the same amount of money to reskill and upskill? Also, there should be different tax reforms for those who layoff employees instead of reskilling to make skilling more attractive."

On changes that have happened to the job market, Guy Ryder, Director-General, International Labour Organisation (ILO), said the picture of the year 2020 labour market is "ugly". "Working hours have gone down. Over 225 million full-time jobs have been lost. A large part of job losses is due to people withdrawing from the workforce. There have been over 20 million people inactive in the job market in the last year. How can we reach them? Migration to education is happening but it's uneven. But, governments have choices," he said.

Salil Parekh, Chief Executive Officer and Managing Director, Infosys Limited, said Indian tech major is making sure it's doing its bit by offering its skilling platform to be used by all its workers and students across India. "We have expanded it to at least 30 of our clients as well. All engineering and science students are also using it. There are over 12,00 courses on it. A different version is also available for students in India, and around 1 million students are benefiting using the skilling platform," he said.

Josephine Teo, Minister for Manpower and Second Minister for Home Affairs, Ministry of Manpower of Singapore, said the future of work is evolving, and it should be a journey without end. "Two decades ago, it was important to build a robust education system. In 2015, we launched a nationwide skills future movement. Employers have a big part to play in this. People respond more enthusiastically if reskilling or skilling bring changes in their jobs. Skill requirements are changing fast, and sometimes, employees are looking to top-up from outside. We encourage companies to skill their employees. The big story is the workforce transformation goes hand-in-hand with skill transformation," she said.

Dharmendra Pradhan, Minister of Petroleum and Natural Gas, and Steel, Ministry of Petroleum and Natural Gas of India, said: "Around 25 million are joining the workforce at any given time. It's been the policy of the government to focus on reskilling and upskilling. Covid-19 allowed us to look at pending things such as digitisation, penetration of the internet, the use of big data and analytics. All this will provide new jobs."

Who does the responsibility of reskilling lie on? Ryder says it's not an exclusive responsibility of a particular country or government. "Businesses and governments and individuals, all have to take part and it has to be a lifelong process. Also, it'll require huge finances. Companies, rather than laying off people, must focus on upskilling and reskilling should be their long-term strategic plan."

On the kind of role companies like Infosys can play in reskilling the population, Parekh said: "Companies will have to make sure reskilling programmes are available to as many people as possible. First, it should become open for students. Other skills are also relevant. I think the more advancement in mobile technology will help in this."

How successful schemes like Skill India have been in the country? Pradhan says the scheme has given a collective boost to the workforce. "For example, in the middle of the pandemic, a driverless car company working in California was getting its server, data and intellectual support from some individuals working in Odisha. That's the kind of benefit Skill India has done to the workforce." Should skilling be self-motivated? Dehaze says it's the three bodies that have to work together. Also, individuals must be incentivised and motivated to stay relevant, he said.