The 3rd Test match between India and England will be played there. Players from both teams have been training at the newly built stadium 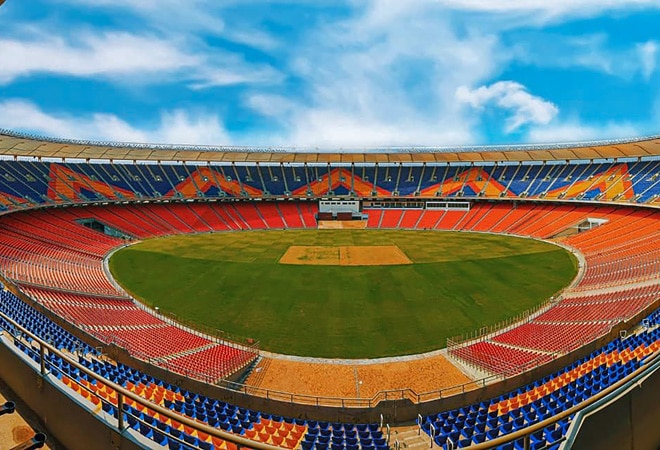 India's recently rebuilt Sardar Patel stadium in Ahmedabad, Gujarat has taken the top spot from Melbourne Cricket Ground in Australia to become the largest cricket stadium in the world. The stadium was inaugurated today by President Ram Nath Kovind in the presence of Union Home Minister Amit Shah.

Located in Sabarmati, the Motera Stadium is equipped with new decorations and latest facilities. The 3rd Test match between India and England will be played there. Players from both teams have been training at the newly built stadium.

"To be honest, to be in the word's largest stadium, we actually cannot wait to have the fans around and see the atmosphere, which will be tremendous," said Hardik Pandya in a video posted by the BCCI.

It feels surreal to be out here at the world's largest cricket stadium, Motera.

Speaking about the new stadium, Indian cricketer Cheteshwar Pujara said, "It's an amazing feeling, it's a huge, huge stadium and we all are looking forward to playing our first pink-ball Test at Motera."

I am looking forward to see the #MoteraCricketStadium (if only on the tube, for now) given the wow expressed by those who have seen it.. Seems to be top drawer stuff.. @GCAMotera@JayShah@BCCI

A ground where I made my Test debut is special to me but this new #MoteraCricketStadium looks Very Very Special. Congrats @GCAMotera for creating such a spectacular stadium which is not only Worlds Largest Cricket Stadium but is a Architectural marvel. @JayShah@parthiv9pic.twitter.com/tyWkPY7rZf

During my first tour to Australia, I was astounded by the beauty of Melbourne stadium. At that time, I used to dream of having a similar such stadium in my home country! Today I can proudly say we are home to the most beautiful stadium in th world.#MoteraCricketStadium@JayShahpic.twitter.com/0JhwZdim9b

It's going be a historic test, as a cricketer having the biggest stadium with great facilities gives me a sense of pride & encouragement. @ImIshant only the 2nd fast bowler to play 100 test for our country, outstanding achievement fella! @JayShah@GCAMotera #MoteraCricketStadiumpic.twitter.com/u6qNneaCua

Congrats @GCAMotera for creating such a spectacular stadium which is not only Worlds Largest Cricket Stadium but is a Architectural marvel.#PinkBallTestpic.twitter.com/rayqaDh2Yl

The only memory I have of the #MoteraCricketStadium is Trump calling the master Suuuuchin Tondulkar. So clearly I want that erased from my memory.

I'm just going to sit back and enjoy Bumrah & Anderson under lights! Time for the #PinkBallTest :)

Will miss being at the stadium today ..what an effort it must have been to create this ..pink test was our dream and it's going be the 2nd one in india.hope to see full stands like last time. Under the leadership of Honble Prime minister @narendramodi Amit Shah @AmitShah .. pic.twitter.com/za7vdYHTN0

As if the stadium in itself wasn't enough.. the high performance gym setup and surpassed all expectations. Magnificent! @imVkohli@RishabhPant17@ImIshant@akshar2026@DhanrajNathwani@mpparimal@JayShahpic.twitter.com/0P90vy9ZHQ

Exactly a year ago, on February 24, 2020, former US President Donald Trump at a programme 'Namaste Trump', had inaugurated the Motera Stadium with PM Modi.

The Sardar Patel Motera Stadium is spread over 63 acres and has a seating capacity of 1.10 lakh people. Melbourne Cricket Ground, on the other hand, can accommodate 90,000 people simultaneously. However, only 55,000 fans will be allowed at the Motera Stadium due to COVID-19 restrictions.

The Motera stadium also has a clubhouse with over three practice grounds, an indoor cricket academy, an Olympic size swimming pool, 76 corporate boxes, 50 rooms, four dressing rooms and a parking area, which can hold around 3,000 cars and 10,000 bikes.

Rakesh Jhunjhunwala on Bitcoin: 'Won't buy it for even $5'