The Russian military is being accused of using Premise, a micro-tasking mobile app platform used to source information on probable targets across Ukraine, according to the General Staff of the Armed Forces of Ukraine.

It has now come to light that the Russian military forces were allegedly using Premise app to source information on possible targets across Ukraine. (Image for representation: Reuters)

The Russian military is allegedly using Premise, a micro-tasking mobile application platform to direct and calibrate fire during its invasion of Ukraine.

The mobile app is there on Android and iOS and offers a task marketplace that lets one earn money for basic tasks such as taking surveys, exploring your city to earn top rewards, and sharing local information like the location of construction zones or price of milk at a local store.

The application's tasks feature local questions as well as surveys pertaining to the city of residence of its users.
Main activities for making money using the application are:

Meanwhile, it has now come to light that the Russian military forces were allegedly using Premise app to source information on possible targets across Ukraine.

Exemplar tasks comprise tracing bridges, ports, medical facilities, and other key installations. The issue was brought to the notice of social users by a Twitter handle by the name of @alexrewrew. What is Ukraine's security establishment saying?

Confirming the same, General Staff of the Armed Forces of Ukraine said in a statement, "The Ukrainian security service has conducted counterintelligence measures throughout Ukraine, detected rogues, Russian intelligence agents and enemy allies. The security service is also carrying out activities to protect cyber and the information space, to refute fake news." 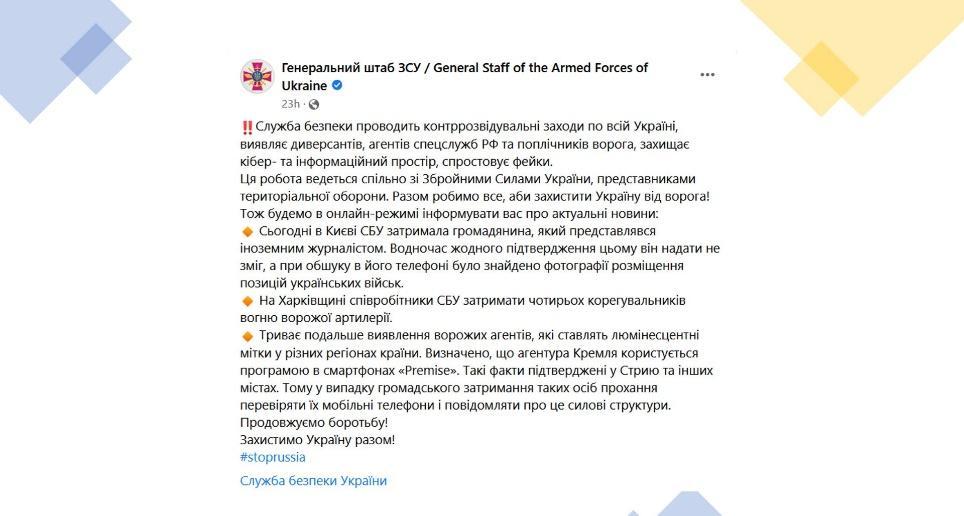 "Today in Kyiv, the forces detained a citizen who represented himself as a foreign journalist. At the same time, he could not provide any confirmation for this, and while searching on his phone, photos of the placement of the positions of Ukrainian troops were found. In the Kharkiv region, the staff of the security forces arrested four in correction with the Russian military," the statement added.

The Ukrainian Armed Forces' statement further stated that it has been found that Russia uses a mobile application called "Premise" on smartphones to enable the country to detect vital information.

"Such incidents have been confirmed in Stryi and other cities. Therefore, in the case of anyone in public using such applications, please check their mobile phones and report it to the law enforcement agencies," the statement noted.

This has not only raised the question of ethicality amidst the Kremlin's excesses invading Ukraine, but also heightened fire alarms amongst the citizens of Ukraine, and has made them wary of any more data related privacy as well as security leaks in other apps.

Responding to the allegations of influence in Ukraine, Maury Blackman, CEO of Premise, said, "Earlier today, Premise was identified in social media posts as being a tool used by Russian forces to locate Ukrainian targets. This is unequivocally false. Premise does not work for or support the Russian military or government."

"Our primary concern is that of the safety and welfare of the Ukrainian people. Premise strongly supports Ukraine and the Ukrainian people defending themselves against this illegal and outrageous invasion of their sovereignty by the Russian government and Mr Putin," he added.

Blackman further stated that Premise has suspended all operations in Ukraine and is closely monitoring the situation. "Our company and our team worldwide strongly support Ukraine and the Ukrainian people defending themselves against this illegal act of aggression by Russia," he said. Soon after Blackman's statement, Premise suspended all its operations in Ukraine. The Kyiv City administration has also issued warnings in this regard to its citizens about painted markings on building roofs.

The administration has asked citizens to check for and conceal any signs on the roofs of their buildings. It is believed that some markings have been painted to guide Russian bombers.

Also Read: Here's where Ukraine stands against Russia in terms of military strength

Past does not back support Premise's claims of being 'innocent'

A Wall Street Journal had also accused the app of using unaware users to gather intelligence for the US military in the past. The source to this is a 2019 proposal by Premise to the US forces in Afghanistan which talks about proxy activities conducted by the app for compiling intelligence.

The company stated that it could evaluate the effectiveness of US information operations, scan, and outline key social structures like banks, mosques, and internet cafes, and secretly monitor Wi-Fi and cell-tower signals in a 100-square-kilometre area.

The proposal said that the company could design tasks to 'safeguard true intent', concealing the intelligence-gathering nature of the operations from contributors.

Another Premise document elucidates that 'proxy activities' such as electricity lines, bus stops, or ATMs could be used to get contributors to move around as the application compiles background data on wireless networks or other mobile phones.

Another proposal submitted by premise to the UK government in 2020 stated that the application can capture over 100 types of metadata from users' cellphones, comprising location, battery level and other installed apps. Back then too, Premise refuted these accusations by releasing a full statement.

"The implication that Premise is a tool of surveillance is completely inaccurate and unfounded. Premise Contributors do not enter private spaces and never collect information on an individual, nor do they violate the privacy of any individual or business. Premise is used to collect publicly available information and is never used to surveil a person or location," the company said in its statement.

(With inputs from Saikiran Kannan.)