News
Lifestyle
Fashion
Looking to buy a new watch? Check out these three by Omega

Looking to buy a new watch? Check out these three by Omega

You may not be able to visit Mars anytime soon but you can always wear the OMEGA Marstimer and be prepared; Speedmaster Chrono Chime by OMEGA is a watch for serious collectors; OMEGA calibre 1932 is housed in an exceptional 18-carat Sedna Gold case

You may not be able to visit Mars anytime soon but you can always wear the OMEGA Marstimer and be prepared.

The creators of the first watch worn on the moon are now thinking way beyond that. In partnership with the European Space Agency (ESA), Swiss watchmaker OMEGA has launched the new Speedmaster X-33 Marstimer, designed to measure every movement on planet Earth and Mars!

Its functions, developed under an ESA patented license, include a function to track Mars’ date and time at the prime meridian, allowing for the fact that a day on Mars is 39 minutes longer than on Earth. It also has an innovative solar compass, to find the true north on planet Earth and Mars.

The watch comes with a classic black dial that provides a contrasting backdrop for the multiple analogue and digital readings. There are Earth and Mars symbols to distinguish which particular functions are in use.

You may not be able to visit Mars anytime soon but you can always wear the OMEGA Marstimer and be prepared. OMEGA's new Chrono Chime forges a historic link between its minute repeater watch of 1892 -- the world's first -- and the pocket chronograph used as the official timekeeper at the Los Angeles Olympics in 1932.

The design, which was inspired by the transition from pocket watch to a wristwatch, is paired with a first-of-its-kind calibre built from the ground up by OMEGA's watchmakers.

The watch's movement is the most complicated OMEGA has ever made, having been developed over six years with sister company Blancpain. It is a sophisticated fusion of chronograph and minute repeater known as the Co-Axial Master Chronometer Calibre 1932.

If you would like to time multiple simultaneous events like an Olympic timekeeper, OMEGA has included a split-second hand as well as three chime cams.

The OMEGA calibre 1932 is housed in an exceptional 18-carat Sedna Gold case. Its dials are made of "Grand Feu" enamel, which is the result of an extremely delicate process in which powdered glass is fused with a metal base layer at extremely high temperatures. 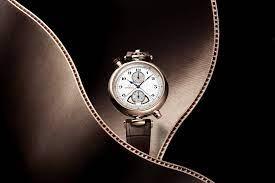 The Speedmaster Chrono Chime by OMEGA is a watch for serious collectors. The classic 45 mm "Numbered Edition" Chrono Chime is inspired by the first watch worn in space 60 years ago in 1962, and powered by a first-of-its-kind calibre.

The dial, in blue aventurine “Grand Feu” enamel, features an inner bezel and subdials in 18K gold. The hour markers and hour/minute hands are in diamond-polished 18K gold. Blue subdial hands and a red-tipped dial hand add extra colour to the display.

The stylish gold watch from OMEGA sounds as good as it looks. The Speedmater comes in a special walnut presentation box with resonance plate to enhance the sound of the watch chimes. 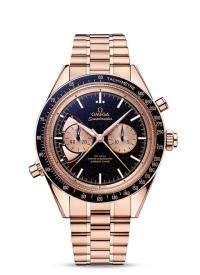