The Lok Sabha will have its usual glamour quotient this time too with newcomers such as action star Sunny Deol and singer Hans Raj Hans set to join their showbiz colleagues Hema Malini, Kirron Kher and Ravi Kishan, all from the BJP, in the lower house of Parliament 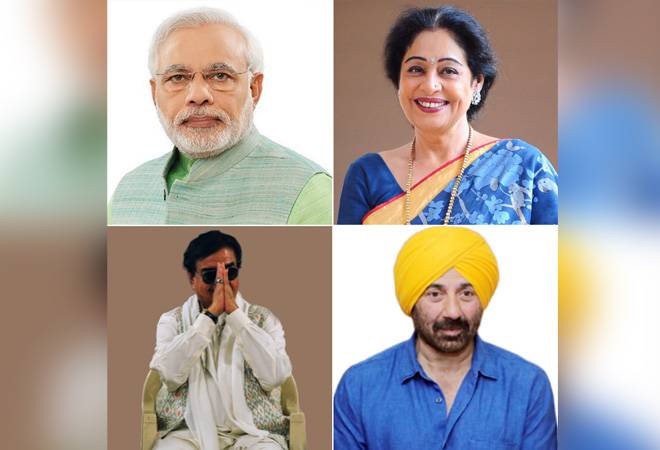 There were big losers too with Raj Babbar, the Congress chief in Uttar Pradesh and its candidate from Fatehpur Sikri, trailing by over 4.5 lakh votes against his BJP rival.

Deol, the newest entrant to the select club of showbiz stars trying to find political relevance who joined the BJP just weeks before the elections, was on his way to clinch the Gurdaspur seat from Punjab with a margin of 82,000 votes, according to Election Commission trends at 8.30 pm.

His electoral rival, Congress' Sunil Jakhar, won the seat in a by-election from Gurdaspur that had earlier favoured another star, Vinod Khanna, for the longest time. The late actor held the seat for BJP for four consecutive terms from 1998 to 2014.

Deol's father, veteran actor Dharmendra, won the Bikaner seat in 2004 but did not seek another term in politics, leaving his wife Hema Malini and son to fight elections. He, however, campaigned for both.

Hema Malini looked set to retain her Mathura seat for a consecutive second term, surging ahead of her closest rival Kunwar Narendra Singh of the Rashtriya Lok Dal.

In Chandigarh, Kirron Kher, the BJP MP from the constituency, was set for another win, polling more than 2 lakh votes against Congress' Pawan Kumar Bansal.

The Modi factor, however, failed to yield dividends for actor-politician Jaya Prada, who recently switched to BJP after spending years in the SP. Her former colleague and now bitter rival, SP's Azam Khan, was poised for a win in Uttar Pradesh's Rampur constituency.

The other BJP star candidate who lost was Malayalam actor Suresh Gopi, who fought from Thrissur, Kerala, which voted in Congress candidate T N Prathapan with .

Jaya Prada was not the only star candidate to cross over to a different party. Actor-politician Shatrughan Sinha and Ravi Kishan switched parties with varying results.

Sinha, who joined the Congress after years of being a BJP rebel, failed to retain his seat in Patna Sahib, which went to BJP's Ravi Shankar Prasad. The Union minister is on course to win with 5.95 lakh votes to Sinha's 3.17 lakh votes.

Sinha's wife Poonam, who was fighting the election as a SP candidate from Lucknow, also did not fare well. Incumbent Home Minister Rajnath Singh seemed set to retain his seat with a vote count of 6.27 lakh votes while Poonam Sinha trailed with 2.82 lakh votes.

Moon Moon Sen's magic may not have worked but Nusrat Jahan Ruhi from the party was on her way to victory from Basirhat, with 6.17 lakh votes. Her BJP rival Sayantan Basu managed only half the numbers at 3.05 lakh votes.

National Award winning actor Prakash Raj, a staunch critic of the ruling government's policies, contested as an independent from Bengaluru Central Lok Sabha constituency but came in third behind the BJP and the Congress.

Actor Sumalatha Ambareesh, who fought as an independent from Mandya, won the seat with 7 lakh votes. The seat was earlier held by her late husband, actor Ambareesh.

PM Modi vows 'every moment of my life, every fibre of my being devoted to nation'