The country remembers what the BJP promised -- Rs 15 lakh to every citizen, employment to over 2 crore people, doubling the farmers' income and women security. The BJP failed on all, says the Congress. 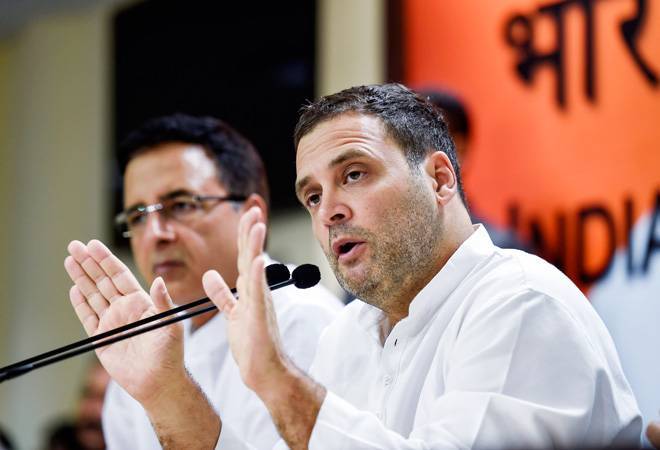 The BJP promised 'One Nation, One Tax' but changed it 900 times, says the Congress.

Slamming the BJP, the Congress on Monday said the BJP government at the centre had failed to mention anything about "employment and jobs" in its manifesto. "Jobs didn't find any mention in the BJP manifesto," Congress spokesperson Randeep Surjewala said. Calling the BJP's Sankalp Patra a "lie", Surjewala said the BJP promised "One Nation, One Tax" but changed it "900 times". "Despite that, there has been a shortfall of Rs 1 crore in revenue collection, said the Congress leader, adding that Angel Tax caused over 70 per cent start-up issues," he said.

During a press conference, the Congress said: "The country remembers what the BJP promised -- Rs 15 lakh to every citizen, employment to over 2 crore people, doubling of the farmers' income and women security. The BJP government has failed on all these promises. The people of the country won't forgive you (BJP government)".

The Congress also pulled up the BJP on the issue of corruption. "The BJP had promised to eliminate corruption. But it has not appointed Lokpal in five years. Over 14.5 lakh RTI requests are pending. Around 40 per cent RTIs were rejected in 2018 alone," said the party.  "In 2014, they promised 'Chowkidar', in 5 years, they delivered 'Chor'," it said.

Delhi CM and AAP leader Arvind Kejriwal said the BJP unveiled a fresh set of "jumlas" without telling the country what is the fate of its 2014 "jumlas". "Modi-Shah don't have the courage to speak on why demonetisation was done? What happened to two crore jobs? Why were farmers pushed towards destruction?" he asked.

West Bengal Chief Minister Mamata Banerjee said Prime Minister Narendra Modi needed to be thrown out not just from the position of prime minister but also politics. "In this election, people would stick a leucoplast on his lips so that he is not able to tell lies. For the sake of the country he should not only be ousted from his chair (PM post) but also ousted from politics," she said.

Asserting that nationalism is his party's inspiration and inclusion and good governance its mantra, Prime Minister Narendra Modi on Monday said the BJP's manifesto aimed to make India a developed nation by 2047, 100 years after independence. "We believe that India's time has come. We are emerging as a power centre in a multi-polar world. The rise of a New India is the new reality, and we shall play a major role in shaping the global agenda in the 21st century," he said. "We want people to hold us accountable. Hence, we have set out 75 goals to achieve by 2022," he added.

"Our aim to change India from a developing country to a developed country. We want to fight poverty rather than sit inside air conditioned rooms. Nationalism is our inspiration and inclusion and good governance is our mantra," he said. "We first addressed needs of the people, now we will fulfil their aspirations," the prime minister said.