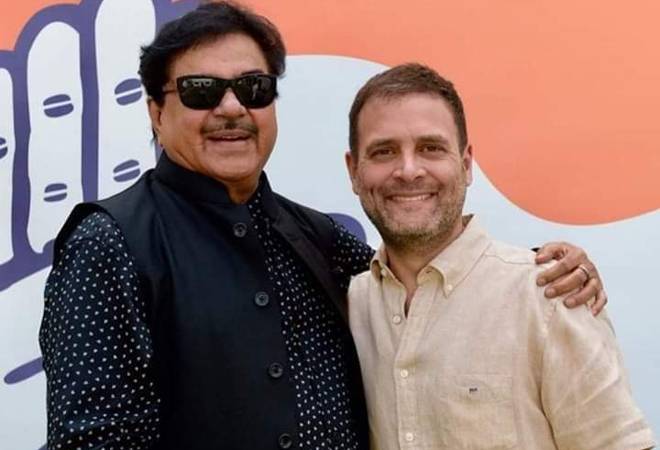 According to sources, the proverbial last straw in Sinha turning to Congress was the BJP shunning him and naming Ravi Shankar Prasad, in Patna Sahib, which was Sinha's constituency of 10 years.

Shatrughan Sinha,72, tweeted, "It's with a heavy heart and immense pain that I finally bid adieu to my old party, for reasons best known to all of us, on 6th April, which also happens to be the Sansthapna Diwas of BJP."

It's with a heavy heart and immense pain that I finally bid adieu to my old party, for reasons best known to all of us, on 6th April, which also happens to be the Sansthapna Diwas of BJP.

Additionally, while addressing a public meet after joining Congress, Sinha stated that Bihar Congress' leader Shakti Singh Gohil has been the backbone of BJP in Bihar and in Gujarat. However, he corrected himself later.

The two-time Lok Sabha MP and former Union Minister said that he left the Bhartiya Janata Party (BJP) because it had moved from being democratic to autocratic. He added that BJP, in terms of decision making, had turned into a "one-man show" and a "two-men army," in a jibe at PM Narendra Modi and Amit Shah. Sinha said that he doesn't have any complaints against most of the BJP leaders and it became an autocracy "after LK Advani". Sinha in a series of tweets, praised the Congress party, along with the RJD. Sinha, in one of his tweet, said that he has forgiven those "responsible for the injustice" given out to him.

He said, "I would like to include some of those who've not lived up to the expectations, to those who are responsible for the injustice and for turning Lok Shahi into Tana Shahi. I forgive and forget at this juncture. The differences I have with some of the present people and policies of the party, leave me with no option but to part ways with it."

Sinha added, "I'm hopeful that the Grand Old National Party which I'm stepping into, will provide me with opportunities to serve our people, society and nation in terms of unity, prosperity, progress, development, and glory. This is a party of great nation builders and luminaries like Mahatma Gandhi, Nehru, Patel and many others.

"Under the present President of Congress the very dynamic, able, tried, tested and successful face of today and tomorrow's India, Rahul Gandhi, I hope, wish and pray that I'm heading into a better direction. Long live democracy and the ...Congress party, along with the alliance of Lalu and Tejasvi's RJD. Long live our great India. Jai Hind."