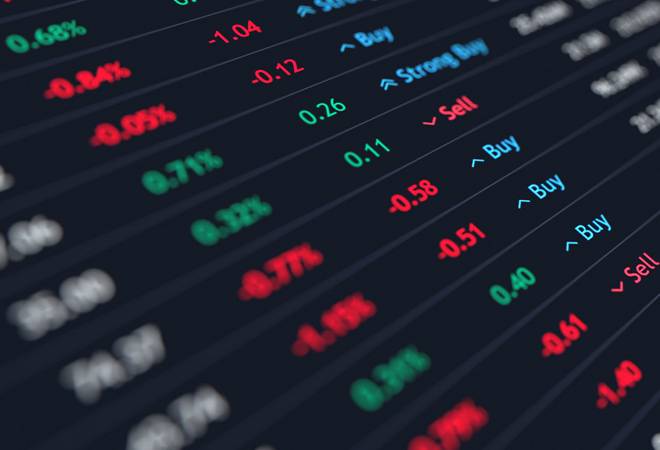 On the sectoral front, Bank, Metal and Media indices traded over 1% were in the green, whereas FMCG and Pharma were the only declining ones on NSE platform. India Vix, the volatility index was at 14.51 today, down by 3% against its last close, indicating low volatilty in today's trading session.

Bajaj Finance, Bharti Airtel, Wipro, Havells India, Bajaj Holding and Investments and Astra Poly Technik were the stocks in today's trade that hit a new all time high, while New India Assurance, Central Bank of India, Eric Lifesciences, Coffee Day Enterprises and Radico Khaitan were among the shares that hit an all time low today.

On the sectoral front, Bank, Metal and Media indices traded over 1% were in the green, whereas FMCG and Pharma were the only declining ones on NSE platform.Inida Vix, the volatility index was at 14.51 today, down by 3% against its last close, indicating low volatilty in today's trading session.

Sterlite Technologies share price rose in trade today after promoters removed 100% of the pledge on the firm's shares with immediate effect.

The MCA has filed a fresh application with the NCLT to bar Deloitte Haskins Sells and BSR Associates from acting as auditors for the next 5 years. Deloitte and BSR are the auditors for IFIN, the subsidiary of IL&FS that is at the eye of the storm. According to the MCA, the auditors had not exercised the requisite due diligence that was expected of them as the accounting watchdog.

Indiabulls informs exchanges on the blackmailers racket to extort money

Indiabulls Housing Finance was the top loser on the Nifty, falling 6.5%, after the company was dragged into an embezzlement suit on Monday.

The company termed the allegations as "bizarre" in a filing to the exchanges, in reference to

allegations against Sameer Gehlaut of siphoning off funds worth Rs 98,000 cr from the co.

The co has further said it has credible evidence against the blackmailers that are behind this criminal conspiracy and has filed an Fir against the people on June 4, 2019.

Bharat Dynamics has informed the bourses that it has signed today a contract worth Rs.1187.82 Crores for supply of heavy weight torpedoes. The contract has to be executed in next 42 months.

NLCIL  reported a fire incident in a clarification notice at a Thermal Power Station-II (7x210 MW)that happened in one of the Boilers (Unit-VI, 210 MW) while resuming operation after annual maintenance. This has led to loss of life for one technician and burn injury for another person. the filing added that there was furnace puffing and smoke emanated from the boiler and the boiler was hand tripped.

The company has an installed capacity of 3934.5 MW and the outage unit has the capacity of 210 MW only. This unit of 210 MW is expected to resume its production shortly. Hence, there is no material impact on account of the above incident.

"We do not want a trade war, but we are not afraid of fighting one," said Geng Shuang, spokesman for China's Ministry of Foreign Affairs. "If the U.S. is ready to have equal consultations, our door is wide open. But if it insists on escalating trade frictions, we will respond to it with resolution and perseverance."

President Trump on Monday threatened to impose large tariffs on $300 billion in imports if Chinese leader Xi Jinping did not meet with him in Japan later this month, showing how he plans to immediately pivot from his trade war with Mexico back to Beijing. "China is going to make a deal because they are going to have to make a deal," Trump said.

Sugar output in Maharashtra to plunge on drought

Sugar production in India's western state of Maharashtra, the country's second-biggest producer, is likely to fall by 39.2% year on year in 2019/20 to 6.5 million tonnes because of a drought-hit cane crop, a senior government said Monday.

The drop will ease pressure on Indian sugar mills to export surplus sugar and support global prices that fell more than 20% last year, partly because of subsidised exports.

Sugar output in Maharashtra to plunge on drought: government official https://t.co/S9mBxeDGvl By @rajendra1857

YES BANK Limited has sold 1,51,06,283 equity shares having nominal value of Rs.10/- each, constituting 2.0010% of the paid-up share capital of Fortis Healthcare Limited on June 7, 2019, resulting into a change in holding of the Bank by more than 2% of the total shareholding of FHL.

On the sectoral front, PSU Bank advanced the most in today's trade with 1% gain, follwed by Meatl gaining 0.91%. Other indices trading in the green were Bank, IT, Metal and Media. In declining indices, Realty topped the list with over 0.20% decline, followed by Pharma and FMCG.

Direction to TTSL by TRAI to facilitate refund on unspent balance

TSL to facilitate refund of unspent balance of pre-paid mobile subscribers and security deposit of the post paid subscribers pursuant to surrender of administratively allocated spectrum in 800 MHz band and closure of services under the CDMA, by the direction of TRAI.

The industry produced overall 4.8 lakhs units in April-May this fiscal compared to 5.3 lakh vehicles produced during the same time period last year, at a decline of 9.3%.

Vedanta Limited announced that the Board of Directors on May 30, 2019 approved the appointment of Mr. MK Sharma as a Non-Executive Independent Director with effect from June 1, 2019. Mr. Sharma, aged 72, retired in May'07 as the Vice-Chairman of Hindustan Unilever Limited.

In another similar feat, Tata Consultancy Services surpassed Reliance Industries to become the most valued firm by market capitalisation in the Indian stock market.

Reliance Group Chairman Anil D. Ambani today stated that unwarranted rumour mongering, speculation, and bear hammering of all Reliance Group companies shares over the last few weeks, "has caused grave damage to all our stakeholders."He stated that the Reliance Group has made aggregate debt servicing payments of over Rs. 35,000 crore in the 14 month period from April 1, 2018 till May 31, 2019. These comprise principal repayments of Rs. 24,800 crore and interest payments of Rs. 10,600 crore.

He reaffirmed that the Group was fully committed to meeting all future debt servicing obligations in a timely manner, through further asset monetisation plans that are already at various stages of implementation.

Oil prices stabilized on Tuesday on expectations that producer group OPEC and its allies will keep withholding supply to prevent prices from tumbling amid a broad economic slowdown which has started eating away at fuel demand growth.

Indusind bank was the top Nifty gainer in the morning session after the bank informed the bourses that Mumbai Bench of the National Company Law Tribunal has yesterday, on June 10, 20l9, conveyed its approval for the Composite Scheme of Arrangement among Bharat Financial Inclusion, the Bank, IndusInd Financial Inclusion and their respective shareholders and creditors.

U.S. stocks extended their recent climb on Monday, with the Dow reaching its longest daily winning streak in 13 months after the United States dropped plans to impose tariffs on Mexican goods and a couple of multibillion-dollar deals boosted the market.

Meanwhile, U.S. President Donald Trump said on Monday he was ready to impose another round of tariffs on Chinese imports if he cannot make progress in trade talks with his Chinese counterpart Xi Jinping at a Group of 20 summit later this month.

Jet Airways share price sulked in early trade today amid a report that Hinduja Group and Etihad Airways may not proceed with plans to resurrect Jet Airways. Jet Airways share opened at a loss of 9.98% at Rs 112.70 and fell to a fresh 52-week low of Rs 109.35 on BSE.

The Bank of Baroda has submitted the notice of Postal Ballot for approving issuance of Equity Shares to Government of India (Promoter) aggregating to Rs. 5,042 crore on preferential basis by Special Resolution.

On a net basis, foreign portfolio investors (FPIs) bought shares worth a net of Rs 216 crore on Friday, and domestic institutional investors (DIIs) were net buyers to the tune of Rs 170 crore, provisional data available with BSE showed.

On the global front, Asian markets opened on a cautious note ahead of US-China trade deal. Nikkei and Hong Kong Index gained 0.3% each. SGX Nifty is up 24 pts or 0.2%.

In Wall Street, US Dow gained nearly half a percent after Trump suspended plans for tariffs on Mexico. Yesterday, 10-year G-Sec Yield surged by 10 bps to close at 7.07%.

Indian benchmark indices opened higher today on account of strong global cues. Sensex opened 115 points up at 39,900, while Nifty was trading at 11,953 up 30 points.