If you had invested Rs 1 lakh into the stock ten years ago, the investment would be worth Rs 25.92 lakh today. The stock has gained 12.23% during the last one year and gained 16.86% since the beginning of this year. Titan Company stock has gained 12.23% during the last one year and risen 16.86% since the beginning of this year.

The Tata Group which comprises over 100 companies worldwide has 18 of them listed on Indian bourses. TCS, Tata Motors and Tata Steel are part of the 30-share Sensex where companies are ranked according to their market capitalisation. The Group is engaged in jewellery, watch and eyewear business through its arm Titan Company. Interestingly, Titan Company shares have delivered more than 2,500% returns to investors in the last 10 years. On May 7, 2009, the Tata Group firm share closed at Rs 41.97 compared to the current price of Rs 1,088 on BSE.

If you had invested Rs 1 lakh in the stock 10 years ago, the investment would now be worth Rs 25.92 lakh. The stock has gained 12.23% during the last one year and risen 16.86% since the beginning of this year. A total of 27 brokerages out of 31 rate the stock 'buy' or 'outperform', three 'hold' and one 'underperform', according to analysts' recommendations tracked by Reuters.

This airline share held by Rakesh Jhunjhunwala turned Rs 1 lakh into Rs 7.5 lakh in four years, do you own it?

The firm, formerly called Titan Industries, announced a sub-division of existing equity shares of Rs 10 face value into 10 shares of Re 1 each on June 13, 2011. It also issued bonus shares in the ratio of one equity share for every single equity share held. After adjusting for stock split and bonus issue, the share price ended 6.8% higher at Rs 229 on June 24, 2011. 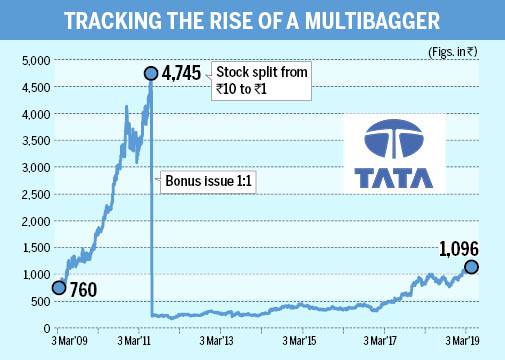 The firm is engaged in offering watches, jewellery, eyeglasses among other products. The company offers plain and studded gold jewellery brands, such as Tanishq, Goldplus, Zoya and Mia.

Alsoread: Rise Of The Titan

The company also offers accessories, bags and sunglasses through its brand Fastrack. It has more sub brands - Raga, Xylys and Edge. The company's subsidiaries include Titan Timeproducts, Favre Leuba Ag and Titan Engineering and Automation Limited.

Titan Company is yet to announce its earnings for Q4 and last fiscal.

The Tata group firm in Q3 reported a 45.97 per cent rise in consolidated net profit at Rs 411.09 crore for the third quarter ended December 2018. The company had posted a net profit of Rs 281.61 crore in the corresponding period of the last fiscal.

During the quarter, Titan's income from watches was Rs 641 crore, a growth of 18.8 per cent over last year.

Titan's jewellery business logged a growth of 36.8 per cent in the third quarter over last year and recorded an income of Rs 4,890 crore compared to Rs 3,576 crore in the preceding year.

In another related development, Titan Company's Bhaskar Bhat will retire on September 30, 2019 as managing director of the firm on attaining the age of superannuation.  Titan's jewellery division Chief Executive Officer CK Venkataraman will take over from Bhat on October 1, 2019.