On Anupam Rasayan listing, Hemang Jani, Head Equity Strategy, Broking & Distribution, Motilal Oswal Financial Services says, "The valuations were little on a higher side and given the current market sentiment, this led to a weak listing

Speciality chemicals manufacturer Anupam Rasayan India saw a lacklustre listing in a volatile session on Wednesday. The stock was listed at 534.37 on the BSE,  a 3.6 per cent discount to the issue price of Rs 555 per share. A total of five stocks, out of 23 that have made stock market debut so far this fiscal, have seen a tepid listing.

The Rs 760 crore IPO of the company was subscribed 44 times earlier this month but given market volatility, its grey market premium had fallen substantially to just nearly Rs 100 per share. Two more companies - Craftsman Automation and Laxmi Organic Industries are likely to test their fate tomorrow while Kalyan Jewellers' listing is expected to take place on March 26.

Other stocks that made a weak debut at the bourses this financial year include Indian Railway Finance Corp. (IRFC) that listed at a discount of nearly 4 per cent in January, Equitas Small Finance Bank (-6.1 per cent), UTI Asset Management (-11.5 per cent) and Angel Broking (-10.1 per cent). Of these, only IRFC is currently trading below its issue price of Rs 26. On the other hand, Equitas Small Finance Bank is significantly up by almost 84 per cent and UTI Asset Management and Angel Broking are merely trading 1 per cent above their issue price. 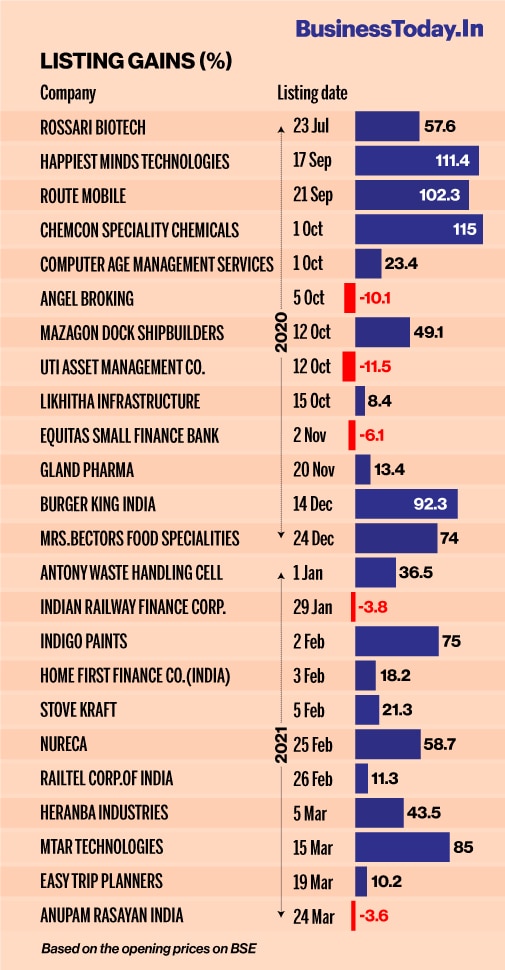 On Anupam Rasayan listing, Hemang Jani, Head Equity Strategy, Broking & Distribution, Motilal Oswal Financial Services says, "The valuations were little on a higher side and given the current market sentiment, this led to a weak listing. Further there are too many IPOs hitting the market at the same time which is resulting in quick rotation of money. Speciality chemical segment is also getting over-crowded; thus, companies with over-valuation are not well supported at a time of weak market cues."

Meanwhile, Indian benchmark indices ended sharply lower on Wednesday amidst high volatility owing to weak global cues and spike in infections. The BSE Sensex closed at 49,180, down by 871 points and the NSE Nifty ended lower by 1.79 per cent.