Happiest Minds 8th most successful IPO in a decade

Happiest Minds IPO received an overwhelming response, getting subscribed by 150.98 times on the last day of bidding on Wednesday

The public issue of Happiest Minds joined the coveted club of most successful initial public offers (IPOs) since 2008 which crossed a subscription ratio of 100 times. The IPO received an overwhelming response, getting subscribed by 150.98 times on the last day of bidding on Wednesday.

In the past 12 years, 15 IPOs (including Happiest Minds) have seen higher demands from buyers resulting in subscription ratio of over 100 times. The ones topping the charts had seen an oversubscription of more than 200 times which include Salasar Techno Engineering with a subscription of 273.05 times, Apollo Micro Systems and Astron Paper & Board Mill with a ratio of 248.51 times and 241.75 times, respectively. Happiest Minds scored the eighth spot with a retail participation of 70.9 times and non-institutional participation of 351.5 times. 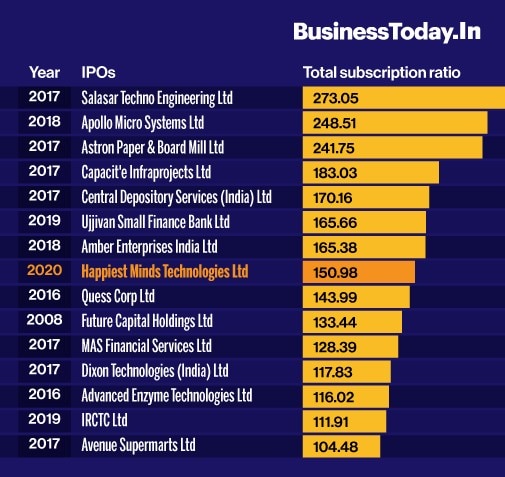 After almost a dry spell so far this year, Happiest Minds becomes the only issue to have crossed this milestone. The other three till date, Route Mobile (on September 10) , SBI Cards and Payment Services, Rossari Biotech have seen a subscription rate of 4.2 times, 26.5 times and 79.3 times, respectively. The investment trust IPO of Mindspace Business Parks ReIT got subscribed by 12.96 times.

Year 2017 remains the blockbuster year for IPOs with 36 issues garnering close to Rs 68,000 crore from the equity markets. The year also saw the highest number of public offers, around seven of them, receiving massive interest from investors and scaling above a subscription of 100 times. Only two IPOs fulfilled the criteria in 2016, 2018 and 2019 each. None of the IPOs  achieved this feat between 2009 and 2015.