The Sensex reclaimed the 40000 level it touched in June 2019, but the journey has been tumultuous since the beginning of this year. The index dropped 5 per cent in July posting its worst monthly performance since October 2018.  Broad indices finished August with marginal declines but strong gains were witnessed in September after government's corporate tax rate cut announcements. This was largely driven by capital flows from foreign portfolio investors (FPIs), who turned net buyers in September after two consecutive months of selling, with outflows amounting to Rs 30,011 crore. 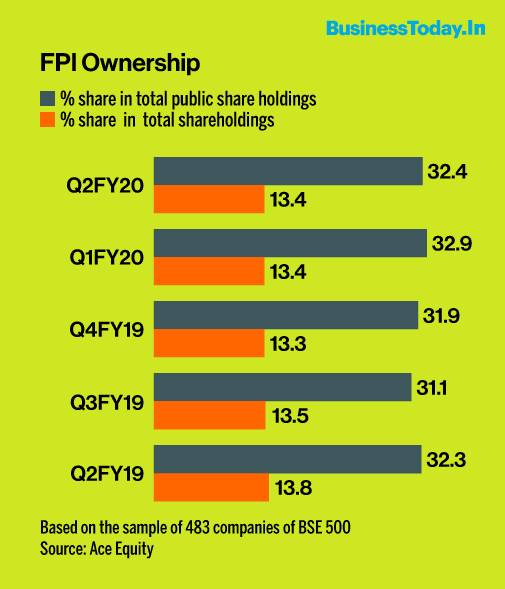 "Yes, we have seen moderation at this front given the worst we have seen in July and August or somewhat for the first part of the year. There are a few steps which are taken very positively by the FPI and FII. The reduction in corporate tax is one of the many. Also the aggressive stance of RBI by reducing rates to make sure improvement in demand is seen in the coming few months", says Mustafa Nadeem, CEO, Epic Research. However, their ownership as a per cent of total public share holdings inched 10 basis points (bps) between Q2FY19 & Q2 FY20. On a sequential basis, though a decline of 50 bps was observed.

The dominant position of foreign institutional can be gauged from the fact that MFs/UTI held almost half the share of FPIs, 6.3 per cent, in the total shareholdings of these companies in the second quarter. 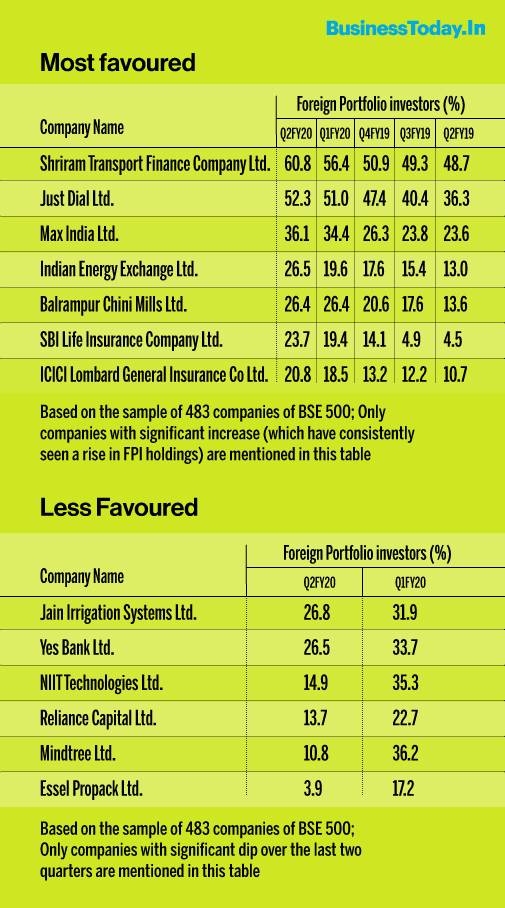 Almost 12 per cent or 58 companies of the total sample saw a consistent rise in their FPI holdings in the last five quarters. These include Shriram Transport Finance Company, Just Dial and Zee Entertainment Enterprises, where their holdings jumped 12.1 percentage points, 16.1 and 7.9 percentage points, respectively, during the period. Of these 58 stocks, seven companies saw an increase of over 10 percentage points, over the same period, four of which were finance stocks. "Financials were leaders in the last few quarters, but, lately we have seen underperformance. That is part and parcel, it could be because of stock rotation and specifically moving to quality stocks in that universe," Nadeem adds.

More than half of the sample saw a decline in their FPI holdings in the last two quarters of this fiscal.  Some prominent ones going out of favour were two mid-sized IT stocks, the crisis-hit Mindtree and NIIT Technologies with holdings going down by more than 20 percentage points. FPIs also trimmed their holdings in some troubled stocks such as Yes Banks by 7.2 percentage points and Jain Irrigation Systems by 5.1 percentage points. 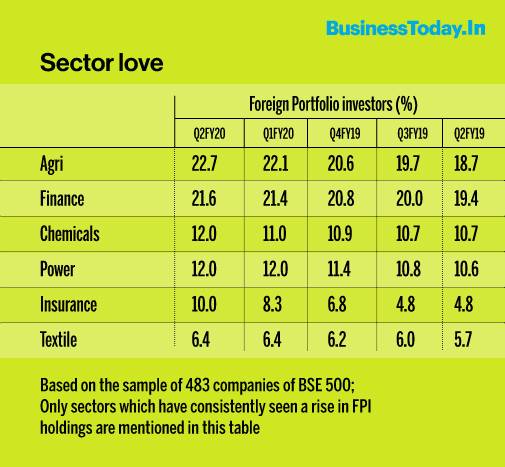 Sectorally, insurance was the most preferred among the 483 companies. FPIs holdings in this segment jumped from 4.8 per cent in Q2FY19 to 10 per cent in Q2FY20. This was followed by agriculture stocks with an increase of 4 percentage points, over the same period. Apart from this, four more sectors -- chemicals, power, textiles and finance made it to the list of sectors with consistent rise in holdings. Among the eight less favoured sectors (with consistent fall in stakes ) consumer durables and paper industry stocks saw the maximum dip of more than 3 percentage points in their FPI holdings , over the same period.  "Consumer durables are actually struggling for quite a while due to deteriorating growth, falling credit growth, the slowdown in demand and so many other factors, "he adds.

Markets are poised with all the positivity it can with recent structural changes in the financial system. With recent news related to review of LTCG and DDT, Nadeem expects we may see a further boost that can make benchmark break the roof, all-time highs, and add 3-4 per cent above that.