Nearly 8.2 lakh new investors jumped on the bandwagon when the benchmark index Sensex clawed back all the lost ground and reclaimed the 50,000-mark after six sessions

Indian equities' back-and-forth movement towards reversing its gains after touching the 50,000 milestone and gaining the momentum back has attracted more investors on Dalal Street. Nearly 8.2 lakh new investors jumped on the bandwagon when the benchmark index Sensex clawed back all the lost ground and reclaimed the 50,000-mark after six sessions. On January 21, Sensex breached 50,000 mark and touched a record high of 50,184.

This exuberance has only been growing since the country went into a strict lockdown, when people were forced to stay at home. However, the speed at which it has grown was quite notable. Sample this. In the past one month, 19.1 lakh investors flocked to the D-street which roughly translated into an average addition of almost 90,000 registered investors in the past 21 trading sessions. Besides, the trend saw a jump of 7.8 per cent over the previous quarter and 28.3 per cent growth over a year. 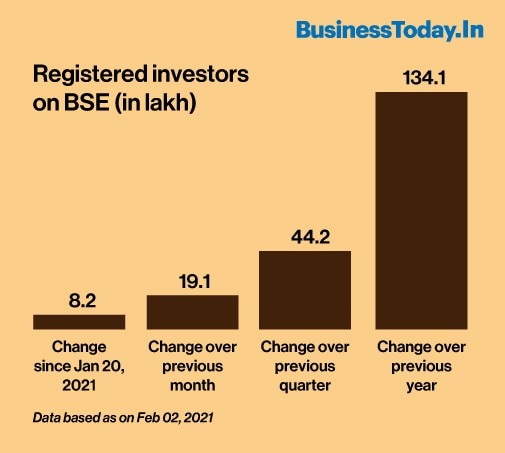 In the past two sessions, the Sensex has risen 3,512 points and the Nifty has climbed 1,013 points. "After yesterday's gigantic run up, market participants continued with the cheerful mood and thus the index started the session with a decent gap up. The index continued its momentum with buying seen on intra-day dips and Nifty ended the day around 14,650, marking its highest close ever," said Ruchit Jain, Senior Analyst - Technical and Derivatives, Angel Broking.

ALSO READ: This Tata Group stock delivered 400% returns in 10 months; should you subscribe?

"We are revising our CY21 Nifty-50 target from 13,500 to 15,000 and BSE-Sensex target from 46,000 to 51,000. Since we last gave the CY21 target for Nifty-50 and BSE Sensex in early December earnings forecast has gone up by approximately 6 per cent. Post yesterday's Budget, looking at Q3FY21 numbers that are coming and the very low base of first half of FY20, we feel there could be more earnings upgrades possible in the next few months," said Rusmik Oza, Executive Vice President (Head Fundamental Research-PCG), Kotak Securities.