"We believe midcaps followed by largecaps are likely to perform best in the second half of 2022. Nifty has corrected 8% so far this year followed by 11% fall in Midcaps while smallcaps have plummeted by 24%. Over last one year, midcaps and smallcaps fell by 2% and 13% v/s a flat Nifty, while over the last five years, midcaps/smallcaps have underperformed by 17%/50%. Given this sharp underperformance, we believe midcaps are likely to bounce first as compared to smallcaps as the comfort level would be higher over there. Following midcaps, largecaps would witness buying interest as the valuations have turned attractive. Nifty now trading at a 12-month forward P/E of 17.6x, which is at a 9% discount to its 10-year average of 19.5x."

Inflows into equity mutual funds in June was much lower compared to the net inflow of Rs 18,529 crore seen in May, data from the Association of Mutual Funds in India (AMFI) showed on Friday.

The lower quantum of net inflow from the previous month could be attributed to investors adopting the cautious path given the ongoing challenges to the investment environment.READ MORE

Japanese government bond (JGB) yields rose on Friday as Japan's former prime minister Shinzo Abe was shot while campaigning in the city of Nara, with reports saying Abe appeared to be in a state of cardiac arrest when airlifted to hospital.

Abe, best known for his signature "Abenomics" policy that featured bold monetary easing and fiscal spending, appeared to have been shot from behind by a man with a shotgun. READ MORE

"Market may recover in 2-3 months once the full impact of inflation plays out on corporate earnings. Secondly by that time, monsoon performance and its impact would be known to the market. Start of H2FY23 also marks the start of festive season which could bring the demand back and revive the economy. Inflation might also peak out by that time while Central Banks might get over with the aggressive rate hike cycle. All these factors can lead to FII flows returning back. India’s earnings cycle continues to remain healthy, providing a silver lining. We are building in 18% growth for FY23 on the base of 35% growth in Nifty EPS in FY22. Though the risks to earnings are tilted towards downside, we expect the profit momentum to continue. That said, we believe that continued earnings delivery is crucial for markets to hold amidst several global and macro headwinds. Further crude is another crucial factor for the markets which has fallen below $100/bbl and any sustenance below this level could trigger a rally in our market."

"Currently, the global markets are witnessing selling pressure mainly on the anticipation of sustained higher inflation and faster normalization in the policy rates in key economies. There is a feeling that faster policy rate hike would put the key major economies under recession. Coupled with this, there is an ongoing conflict between the Russia-Ukraine and re-emergence of Covid-19 cases & related restrictions in the China, which is disturbing the global supply chain. Domestic equity market too is a victim of the above eventualities. Since Oct. 2021, FPI have offloaded over Rs 2 lakh crore from the domestic equity markets.

However, with actions from various global economies and from the Indian government, we feel that the inflation will start easing in the coming quarters. Already the international crude prices are below USD 100/barrel, which is positive for the importing country like India. This is the key reason for optimism in the domestic markets since last 2-3 trading sessions. We believe this momentum is short-lived.

Nifty P/E valuation has come down to around 17-18x as compared to recent highs of 23x. We believe that Nifty earnings will be adjusted down, after factoring the inflationary environment, thereby expecting more downside risk to the Nifty index. The company's management commentary during the Q1 FY23 earnings seasons will be the key for predicting the movement of the index.

Having said that, major indications would come from the US Fed, which is aggressively hiking the interest rate. There are early indications of easing inflation expectations for 2023, which may pressurize the US fed to stop the policy tightening without concerning much about the positive real rate. Equity markets are quick to anticipate such actions and thus are likely to react positively. We as a brokerage house are anticipating such eventualities and coming to a conclusion that H2 of the current fiscal will be positive for the equity market."

India has extended by two weeks a deadline for the export of 800,000 tonnes of sugar as annual monsoon rains make it tough for many producers to move stocks from factories to ports, the government said on Friday.

Mills in the world's biggest sugar producer are now allowed to export the sweetener until July 20, the government said in a notification, pushing back a previous date of July 5, which some mills missed after heavy rains impeded transport.

"This is a very good step," said Aditya Jhunjhunwala, president of producer body the Indian Sugar Mills Association (ISMA). "A small quantity was stuck, but that will be exported before the new deadline."

Shares of Mahindra & Mahindra (M&M) hit their all-time high today after the firm said British International Investment (BII) would invest up to Rs 1,925 crore or $250 million into a new electric passenger vehicle company to be set up by the Indian auto major.

The rupee depreciated 12 paise to 79.25 against the US dollar in early trade on Friday tracking the strength of the American currency and persistent foreign fund outflows.

At the interbank foreign exchange, the rupee opened at 79.20 against the American dollar, then lost ground to quote at 79.25, registering a fall of 12 paise from the last close.

On Thursday, the rupee closed at 79.13 against the dollar.

10:25 AM: TCS to announce Q1 results tomorrow; here’s what to expect

IT major Tata Consultancy Services (TCS) on July 8 may report double-digit growth in revenue and net profit on a year-on-year basis for the quarter ended June 30. However, the topline and bottom line may increase in single-digit on a quarter-on-quarter (QoQ) basis. The company may also witness a sequential dip in margin due to wage hikes and an increase in other expenses.READ MORE 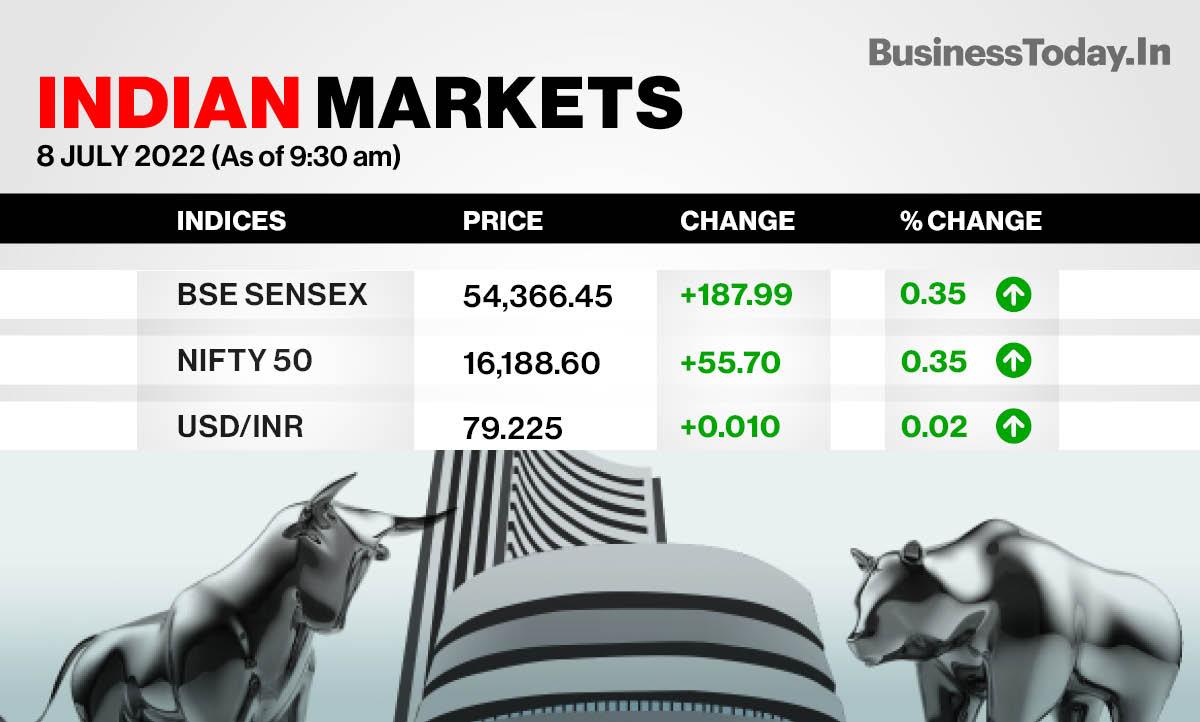 "The recovery in Nifty and Nifty Midcap by 6% and 10%  respectively from their recent lows indicates the resilience of the markets and its potential to scale newer heights under a favorable macro construct. The present rally is driven partly by expectations that given the steady decline in commodity prices inflation will start showing a declining trend enabling central banks to go a bit slow on hiking rates, and partly by short covering. It is quite probable that central banks may not tighten policy as much as the market feared earlier. If emerging data indicates the possibility of a soft landing for the US economy, the rally may gather momentum. Therefore, commodity prices have to be closely watched."

"Going forward, our market is likely to remain upbeat in the near term, wherein any minor dip could be seen as an opportunity for the bulls to add long positions. From here on, we may expect gradual moves in key indices, but individual pockets are now likely to outshine. Hence, it's advisable to keep focusing on such potential movers, which are likely to provide better trading opportunities. Also, we would like to reiterate not being complacent with the gains and staying abreast with daily developments across the globe." The Indian market is likely to open higher today as SGX Nifty rose 103 points to 16,236. The Singapore Stock Exchange is considered to be the first indication of the opening of the Indian market.