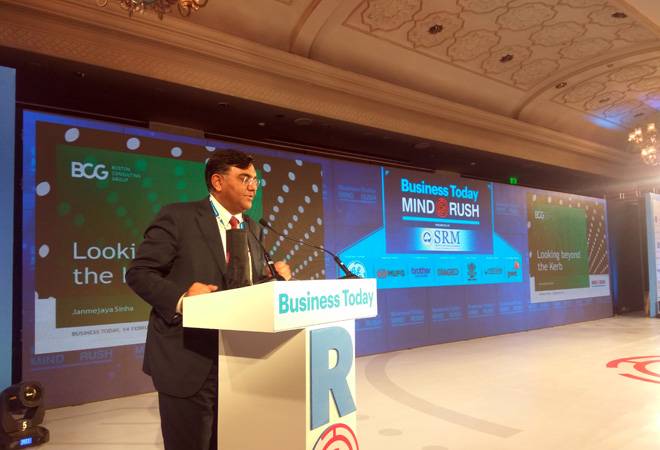 "The future is not far," says Janmejaya Sinha, Chairman (India), Boston Consulting Group, while kicking off his session Looking Beyond the Kerb (Future of Business) at the Business Today MindRush 2019. Sinha said that the four trends that are likely to shape the world going forward include digitisation, Asia, democracy, and geopolitics.

Detailing these four trends, Sinha said that "all of what we assume and take for granted is under challenge." He went on to give example of mobile phones to explain the impact of digitisation on the modern society. "In 2000, India had 3.6 million mobile phones. It's now a weapon of digitisation of big data. We cannot imagine a life without mobile phones. We don't know a life without cellphones," he says, adding that the wars of the future will not be nuclear but cyber. "Several countries have cyber capabilities, including the US, China, Russia, Israel and Iran. Cyber is a lethal weapon," he says.

Alos read: Companies have to be decisive, says CP Gurnani

To explain the disruptive nature of the digitisation, Sinha said that in 2007, when iPhone started taking pictures, the digital camera industry became dead, nearly 97 per cent of the pictures today are taken on cellphones.

The companies like Uber and Netflix were globalised in five-six years because they didn't need set-ups to globalise like other old-age companies. "The real killer is going to be data. The data and digitisation destroy you," he adds.

Touching upon the other big trend that's going to shape the future, Sinha says that Asia is influencing the world in a variety of ways. "Asia is adding the maximum amount of demand, but it's also destroying environment. The future of the world will be dependent on Asia. But Asia has not been able to solve the inequality between countries. The economic concentration is killing democracies. All democracies are functioning so poorly," he adds. While concluding his address to a houseful audience at New Delhi's Taj Palace hotel, Sinha quoted spiritual leader Dalai Lama who had said that "Beyond the Kerb, my recommendation is to choose to be optimistic, it feels better".

MindRush 2019: Thoughts to Feelings to Action to Result

MindRush 2019: Companies have to be decisive, says CP Gurnani