The crowds, as it seemed, waited with bated breath for Shashi Tharoor to hit the lectern. 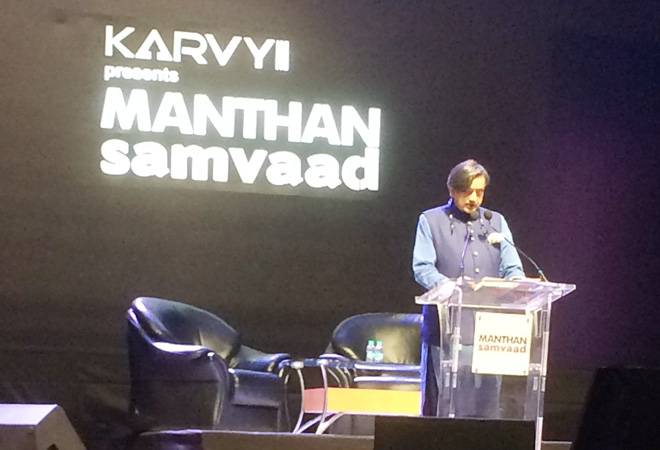 It is called the Manthan Samvaad and is a forum to promote public discourse on things that matter. It brings together thought leaders, including some of the finest minds in the country. Held in Hyderabad on October 2, the sixth edition so far, it had Justice A P Shah, the chief justice of the Delhi High Court, among others as speakers. Discussing the growing intolerance within the country, justice Shah talked about the growing cases of lynching across India - nearly 34 cases were reported from nine states last year alone, he said. That he was saying all of this and more on Gandhi Jayanti, only seems to have got the audience glued on to his narrative. Sure, this audience was a motley group of people from all walks of life but then, there were over 2000 of them, according to Ajay Gandhi, a key organizer and the brain behind the event. All in rapt attention, trying to digest the shape intolerance was taking, in what Shah called an atmosphere of hatred.

Amit Chandra, managing director, Bain Capital, who came in next, spoke about the factors that led him to take a deep dive into philanthropy. He opined on 'How Indians can build India". One point, he did highlight, was the transformational power of 'Zero Budget Natural Farming (ZBNF)', a farming method, which does not involve purchase of any inputs and all are sourced from the root zone of the plants and through organic farming practices. Chandra has been working with a lot of farmers on ZBNF, given its huge potential at raising farm incomes. He also had a word of praise for Andhra Pradesh government in its efforts to make it a success out of ZBNF in Andhra. Its chief minister Nara Chandrababu Naidu was seen by Chandra as a strong proponent of the ZBNF practice and one who wanted to make Andhra completely ZBNF by 2022.

The crowds, as it seemed, waited with bated breath for Shashi Tharoor to hit the lectern. Among the few wordsmiths from the Indian parliament, Tharoor was at his best subtly trying to made a strong pitch for his latest book "Why I am a Hindu?" while also ensuring he gains his political brownie points. The crowd seemed all too willing to ignore his personal problems that have haunted him for the past four years since the mysterious death of his wife Sunanda Pushkar.  Tharoor read out passages from his book and made a case for Hinduism as the ideal religious of the 21st century. "Hinduism," he said, "has many of the attributes of a universal religion - a religion that is personal and individualistic..." As against some of the other faiths, where you look for the Gods in the heaven, a Hindu looks for God within himself. That to him is suggestive of the interiority of Hinduism, which grants complete freedom to the believer to find his or her own answers to the true meaning of life. There were others too who kept the audience enthralled. For instance, Tejal Kanitkar, Assistant Professor at the Tata Institute of Social Sciences, talking about climate change, Kanhaiya Kumar, former president, JNU Students Union speaking on "Sach ki Parchiyiaan' apart from Daniel Fernandez, a popular stand-up comedian. The showstopper, many felt though, was A R Sherwani, who read out passages from the Bhagwad Gita in urdu.

Deserted by Lady Luck: Elections are around the corner and PM Modi's economic woes are growing