RBI has warned that economic disruptions may intensify systemic risks to India's financial sector primarily because NBFCs remain vulnerable with their deteriorating asset quality and reluctance of the market to lend them money. On the global front, there is little to cheer about shadow banking There is no escaping the long shadows of shadow banking firms in India in the time of pandemic-induced economic disruptions.

The banking regulator RBI issued a clear warning on July 24, in its Fiscal Stability Report, that the economic disruptions may intensify risks to its shadow banking firms, the Non-Banking Financial Companies (NBFCs), "and consequently" the systemic risks to the entire financial sector.

The threats to the NBFCs come from two sources: (i) their deteriorating asset quality and (ii) continued reluctance of market to lend money in the aftermath of implosion in two leading NBFC players, Infrastructure Leasing & Financial Services Limited (IL&FS) and Dewan Housing Finance Corporation Ltd (DHFL) in 2018 and 2019. Both were taken over by the RBI for loan defaults and now face bankruptcy proceedings.

The RBI report explained the risks even while saying that the overall outlook remained stable.

It said: "Stress on non-banking financial companies and co-operative banks, that had mounted in the wake of credit events in 2019, has been exacerbated by risk aversion and flight to safety among banks, leading to funding constraints and differentiation in market access. The outlook remains clouded with considerable uncertainty as the pandemic takes its toll."

About 50% of the NBFCs' aggregate assets were under the moratorium on loan repayment by the end of April. Banks, which have been fighting shy of lending directly to the industry because of growing threat of bad loans (non-performing assets or NPAs), increased their lending to the NBFCs in recent years, as a result of which bank lending accounted for 28.9% of the total NBFC borrowings in December 2019 - up from 23.1% in March 2017.

The RBI noted that notwithstanding this support from banks, the real risks to the NBFCs' liquidity come from declining market borrowings. It said that under the stress tests, 11.2% to 19.5% of NBFCs would not be able to comply with the minimum regulatory capital requirements (CRAR) of 15%. 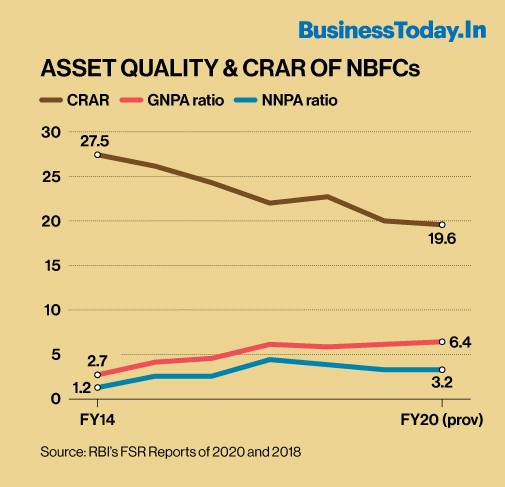 In the meanwhile, the NBFCs have grown in influence, as is evident from the RBI data mapped below, against the GDP (at constant prices). 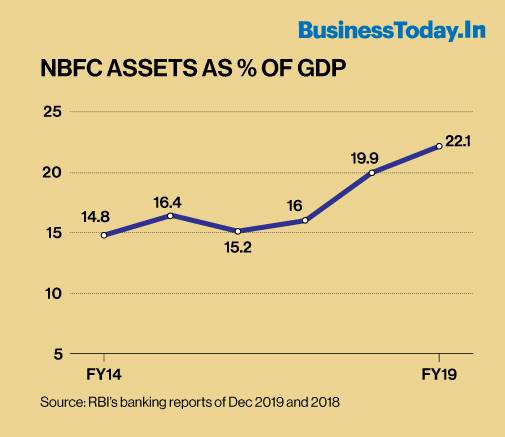 Shadow banking not only poses a threat to India but is equally a risk to the global financial order. For better appreciation, the 2007-08 financial crisis needs to be revisited.

In 2017, the International Monetary Fund (IMF) released a special edition of its magazine 'Finance & Development', evocatively titled "Back to Basics". In one of the chapters, its economist, Laura E Kodres explained how shadow banks played a central role in the crisis of 2007-08.

She wrote: "Shadow banks first caught the attention of many experts because of their growing role in turning home mortgages into securities. The "securitisation chain" started with the origination of a mortgage that then was bought and sold by one or more financial entities until it ended up part of a package of mortgage loans used to back a security that was sold to investors. The value of the security was related to the value of the mortgage loans in the package, and the interest on a mortgage-backed security was paid from the interest and principal homeowners paid on their mortgage loans. Almost every step from creation of the mortgage to sale the security took place outside the direct view of regulators."

She explained that the problem arose when investors turned skittish about the "real worth" of the longer-term assets of shadow banks and many decided to withdraw at the same time. The shadow banks went into "fire sells" to meet the demand, putting other financial institutions in danger because of their inter-connectedness. Most importantly, it caught "real banks" (traditional or commercial banks) on the wrong foot because "some shadow banks were controlled by commercial banks".

Whatever the logic of traditional or commercial banks may be, for running or promoting shadow banking, the real motive seemingly was to escape regulatory oversight and make higher profits.

In fact, that is precisely how shadow banks emerged as big and powerful players in 1980s - the era marked by neoliberal (radical right) economics in which profit-making became the driving force of businesses.

Prof. Nouriel Roubini of the New York University, better known as "Dr. Doom" for forewarning the impending "US housing burst" in 2006 and also predicting its recessionary impact world over, explained the emergence of shadow banking in his 2010 book, "Crisis Economics" (co-authored with Prof. Stephen Mihm of the University of Georgia). (Former RBI Governor Raghuram Rajan too had warned against the housing bubble.)

The authors wrote: "A growing number of people who joined the financial services industry from the 1980s onward realised that they could make plenty of money, so long as they were willing to walk the banking tightrope without a safety net underneath. There were ways to conduct banking free of regulations, but also free of the protections afforded ordinary banks. So began a game of "regulatory arbitrage," the purposeful evasion of regulations in pursuit of higher profits. This quest gave rise to the shadow banks."

Shadow banking, in the form of informal credit, has always existed outside regulatory oversight, like moneylenders providing credit to villagers for example, but it never threatened the world order in the way it did in the run-up to the 2007-08 financial crisis.

One big initiative to monitor shadow banking was the multinational Financial Stability Board (FSB), set up in 2011. India is a part of this initiative.

But Kodres was not happy. She commented: "The authorities (monitoring shadow banking) are making progress, but they work in the shadows themselves - trying to piece together disparate and incomplete data to see what, if any, systemic risks are associated with the various activities, entities, and instruments that comprise the shadow banking system."

Initially, the FSB defined shadow banks broadly to include all entities "outside the regulated banking system that perform core banking function", which meant credit intermediation (taking money from savers and lending it to borrowers) and they were called Non-Banking Financial Intermediation (NBFI).

In its latest report of January 2020, the FSB divided those into three categories: (a) MUNFI (Monitoring Universe of Non-bank Financial Intermediation): "broad measure" of all NBFIs that are not central banks, banks or public financial institutions (b) OFIs (Other Financial Intermediaries): a subset of MUNFI that excludes insurance corporations, pension funds or financial auxiliaries and (c) NBFIs: "narrow measure" of NBFI comprising of non-banks that authorities have identified as the ones that may pose bank-like financial stability risks and/or regulatory arbitrage.

The NBFIs (narrow measure) are the ones identified as posing systemic risks.

The FSB 2020 report says the "systemic risk" comes from activities that are "typically performed by banks, such as maturity/liquidity transformation and the creation of leverage".

The alarming aspect of the NBFI is that it is growing. 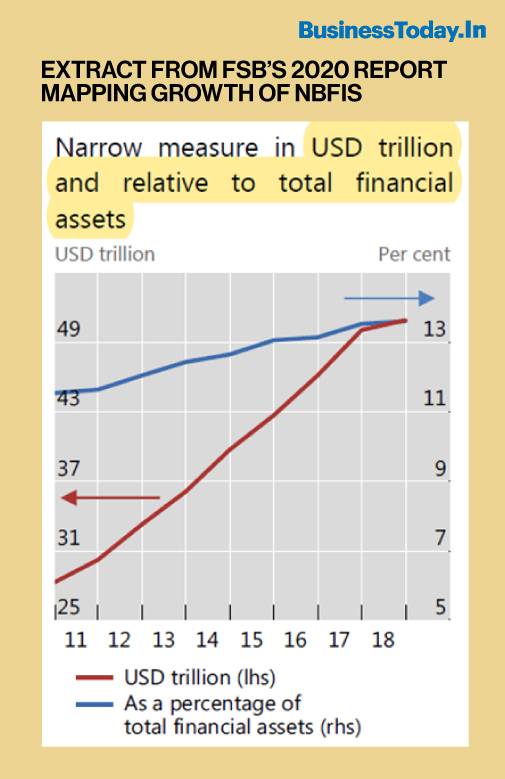 The FSB measures 29 jurisdictions (including India and China), representing over 80% of global GDP.

What does the FSB of 2020 say about India? (India's NBFCs correspond to the NBFIs.)

It shows India is an outlier - in a negative way.

As for NBFIs (NBFCs in India), a major drawback is their over-dependence on short-term funding for long-term lending (technically called EF2 function).

Globally, such funding accounted for 7% of the total in 2018 and it grew 6.9%. In sharp contrast, India recorded a 17.4% growth in 2018. As for its share in the total NBFC funding, the RBI's banking trend report released in December 2017 revealed that it stood at an unbelievably high of 99.7%.

In the NBFC context, short-term means a period of up to three years and long-term for up to 15 years, as in the case of housing and infrastructure loans. Why such anomaly continues in the NBFCs' functioning is an abiding mystery.

Little wonder, when the NBFC crisis hit India in 2018 and 2019, the two big players to implode (IL&FS and DHIL) were associated with infrastructure and housing sectors, though this is only one part of the saga.

How future partnerships, collaborations will roll out in a COVID world