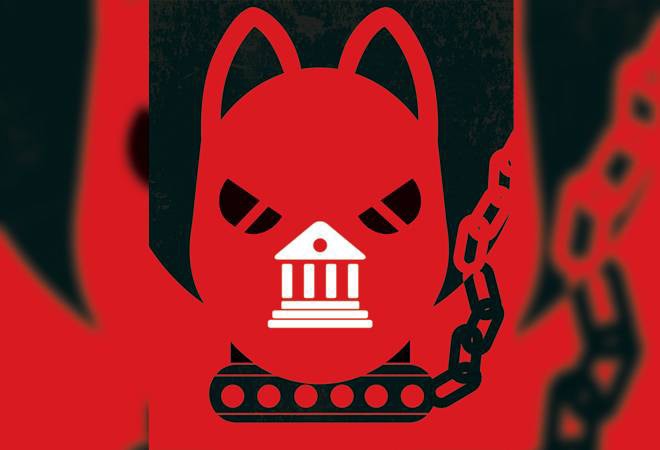 There are several categories of NBFCs in India, some of them run by the government and some by private players

Shadow banking isn't exactly a neoliberal (radical right) concept, it existed earlier, but as Prof. Nouriel Roubini of  New York University and Prof. Stephen Mihm of the University of Georgia pointed out in their 2010 book "Crisis Economics" it entered mainstream financing in a big way and turned the rules of the game in the neoliberal era.

They wrote: "A growing number of people who joined the financial services industry from the 1980s onward realised that they could make plenty of money, so long as they were willing to walk the banking tightrope without a safety net underneath. There were ways to conduct banking free of regulations, but also free of the protections afforded ordinary banks. So began a game of "regulatory arbitrage," the purposeful evasion of regulations in pursuit of higher profits. This quest gave rise to the shadow banks."

It is by now well-documented that governments world over continue to run and promote shadow banking entities even after the 2007-08 Great Depression, knowing fully well that they played a central role in it, which is also well-documented.

The question then is why governments do it. Why this extraordinary inclination for self-inflicted injury?

The "Crisis Economics", in the quote above, gives a clear answer that goes unchallenged: shadow banking is designed to evade regulation to make higher profit.

Governments and government-run entities running and promoting shadow banking have their own explanations. Here are some of them.

The opening sentence of the report reads: "Non-bank financing is a valuable source of financing for many firms and households. It facilitates competition among financing providers and supports economic activity. Notwithstanding this, non-bank financing may become a source of systemic risk - both directly and through its interconnectedness with other parts of the financial system - if it involves activities that are typically performed by banks, such as maturity/liquidity transformation and the creation of leverage."

The report does not explain why this "valuable source of finance" can't be better regulated like banks since it poses "systemic risk" directly and indirectly.

The report says NBFIs are growing even post-2007-08 crisis.

The relevant sentence reads: "The narrow measure (NBFIs) has grown faster than GDP since 2012, increasing to 77% of all participating jurisdictions' GDP in 2018 from 64% in 2012. This trend is observed in most jurisdictions..."  It measures 29 jurisdictions, including India, that constitute 80% of global GDP.

The size of these risky NBFIs was $50.9 trillion in 2018 - bigger than the combined GDP of the US, China, India and several other big economies. It was 67% of the global GDP in 2018, taking global GDP at $77.2 trillion as on December 1, 2018, according to the database of Washington-based Institute for International Finance (IIF).

The assets of NBFIs constitute 13.4% of the total assets of all financial entities.

The FSB 2020 report explains the "systemic risk" of NBFIs comes from their activities of "credit intermediation" that "involves maturity/liquidity transformation, leverage or imperfect credit risk transfer and/or regulatory arbitrage" (gap in regulations).

As for India, it is a major driver of NBFIs globally.

In the following graph, India (IN) is fourth from left, the first three being Argentina (AG), Hong Kong (HK), and Russia (RU). Fifth is Italy (IT). Here is an interesting bit: "Eight jurisdictions reported a decline in the narrow measure (NBFIs), with the largest decline in dollar terms reported by China."

Size and growth in all shadow banking entities (MUNFIs)

The actual size of all shadow banking entities, classified as "broad measure" of all NBFIs or "Monitoring Universe of Non-bank Financial Intermediation" (MUNFI), is far bigger: $183.6 trillion in 2018 or 48.5% of financial assets of all financial entities ($379 trillion) or 238% of global GDP (using the IIF's database on global GDP).

How does one keep such a big and powerful financial segment from hobbling global economy again without tight regulations?

India's NBFCs fit the description and working of NBFIs and are considered as such by the FSB.

The opening line of India's banking regulator RBI's Fiscal Stability Report, released on July 24, 2020, reads: "NBFCs complement banks in extending credit in the economy and they are a vital cog in the wheel for extending last mile credit needs. There were 9,543 NBFCs registered with the RBI as on September 30, 2019 (excluding HFCs), of which 82 were deposit accepting (NBFCs-D) and 274 were systemically important non-deposit taking NBFCs (NBFCs-ND-SI).

The two big NBFCs that collapsed in 2018 and 2019, IL&FS was a non-deposit taking (NBFCs-ND-SI) and DHFL a deposit-taking (NBFCs-D) NBFCs.

There are several categories of NBFCs in India, some of them run by the government and some by private players.

Does the RBI regulate them all and as tightly as conventional banks?

"Certain categories of entities carrying out NBFI activities are exempt from the Reserve Bank's regulation as they are being regulated by other regulators. They include housing finance companies (HFCs), mutual funds, insurance companies, stockbroking companies, merchant banking companies, and venture capital funds (VCFs), which are often referred to as the 'shadow banking system'."

Here is more. The RBI's FAQs on NBFCs have a question (number 9): "Does the Reserve Bank regulate all financial companies?"

The answer: "No. Housing Finance Companies (HFCs), Merchant Banking Companies, Stock Exchanges, Companies engaged in the business of stock-broking/sub-broking, Venture Capital Fund Companies, Nidhi Companies, Insurance companies and Chit Fund Companies are NBFCs but they have been exempted from the requirement of registration under Section 45-IA of the RBI Act, 1934 subject to certain conditions." These are regulated by different entities "for avoiding duality of regulation".

From this, it would appear that the RBI "regulates" only the systematically important non-deposit taking NBFCs (NBFCs-ND-SI) whose asset size is Rs 500 crore or more.

But the overnight collapse of IL&FS, an NBFC-ND-SI, in 2018 is evidence that it didn't exercise its existing powers. The Serious Fraud Investigation Office (SFIO), the statutory corporate fraud investigating agency, investigated and filed a report on the functioning of IL&FS subsidiary, IL&FS Financial Services Ltd (IFIN), with a special court in Mumbai on May 30, 2019.

It squarely blamed the RBI for its gross inaction, allowing IFIN to continue operating after detecting financial frauds in 2015, 2016, and 2017.

A few days later, on June 4, 2019, the RBI explained that it had given IFIN time until 2019 to clean up its books. On July 22, 2020, the National Financial Reporting Authority (NFRA), a new regulatory authority set up in 2018, debarred IFIN's auditor former Deloitte India CEO Udayan Sen, for seven years and imposed a penalty of Rs 25 lakh for financial frauds, concluding that he "had been totally compromised".

Like the FSB, the RBI does not explain why NBFCs are not or can't be subjected to tough banking regulations while claiming nevertheless that "NBFCs complement banks in extending credit in the economy and they are a vital cog in the wheel for extending last-mile credit needs".

Why shadow banking keeps growing even after 2007-08 meltdowns?

Notwithstanding flimsy explanations justifying shadow banking, here is a critical fact that has escaped serious scrutiny and needs to be red-flagged.

The World Bank's 2013 report, "Rethinking the Role of the State in Finance", noted with apprehension how banking ownership has sharply shifted from government hands (public sector) to private hands.

The graph below shows a sharp fall in government ownership of banks in developing economies. 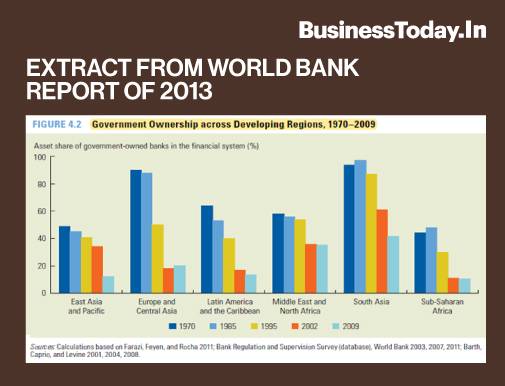 The report commented that post-2007-08 meltdowns the developed economies witnessed an "uptick" in the share of state-owned banks post-crisis "through bailouts, mergers, recapitalisation and nationalisation of distressed financial institutions" but "declined sharply" in developing economies.

Is this change in bank ownership in developing economies good?

The report sounded caution and pointed out that the 2007-08 crisis brought to the fore the potential role of state-owned banks in "stabilising aggregate credit".

Recall how the FSB's 2020 report flagged off NBFIs' "credit intermediation" activities as the one posing "systemic risk" to financial systems. It is worth noting that India and China were two big economies that had escaped the full wrath of the 2007-08 financial meltdowns.

Does that say something about the ownership pattern of banks?

How bank ownership is critical to US

Here is another graph about shadow banking and their connection with the 2007-08 financial meltdowns in the US.

This graph is from a working paper "Mortgage Debt and Shadow Banks" published by the Netherlands' central bank De Nederlandsche Bank on March 1, 2018. The study was carried out in collaboration with the University of Groningen (the Netherlands). Mark how the share of shadow banks (red line) in the US peaked just before 2009 and that of the state-owned banks (blue line) was its lowest then.

What to do about shadow banks?

The solutions are well-known and documented by many economists.

Here are some critical ones that Prof. Roubini and Prof. Mihm wrote in their 2010 book "Crisis Economics". (Writing a review of this book, The New York Times described Prof. Roubini as someone known as "Dr. Doom" for accurately predicting the US housing burst and the consequent global recession two years in advance in 2006.)

First, the authors sought central banks to "enforce" existing regulations and powers to protect financial systems. They have plenty of powers to check "speculative manias from spinning out of control" but didn't use them in the run-up to the 2007-08 meltdowns.

They recommended that regulations should be consolidated in the hands of fewer, more powerful regulators. This is far more relevant for India and the US.

Second, to prevent overnight collapse of shadow banking entities, they suggested extending two existing facilities that prevent bank runs: (i) central banks to act as the lender-of-last-resort to shadow banks and (ii) deposit insurance for shadow banks to assure depositors that their money is safe.

Both these facilities became the global norms in the post-World War II order.

The authors wrote that the first (lender-of-last-resort) was "available during the Great Depression, but the Federal Reserve (US) failed to use it effectively" and the second came in with the Franklin Roosevelt's New Deal. The rest of the world followed.

The trouble is both these cost money. NBFCs would then be subjected to tight RBI regulations two important ones of which are: (i) maintaining certain levels of cash all the time, called Cash Reserve Ratio (CRR) - set at 3% for FY21 - and (ii) provisioning against NPAs - ranging from 15% to 100% depending on the period of defaults.  Both reduce cash available with NBFCs for lending and thereby, potential for profit.

Similarly, deposit insurance (Indian depositors are now insured for Rs 5 lakh) is a charge on banks and if adopted, would become a charge on NBFCs, further reducing cash availability for lending. These measures would also call for tighter financial reporting norms which all shadow banking entities seek to avoid.

These two facilities are relevant to India for another reason: 99.7% of NBFCs' funding is short-term (technically marked as EF2 function), as revealed by the RBI's Trend and Progress of Banking released in December 21, 2017 in India  and a perennial source of concern in hard times (like panic that spread during the 2007-08 and led to many bank runs).

For India's NBFCs, short-term means 1 to 3 years while long-term lending can go up to 20 years in case of housing and infrastructure projects, bankers aver.

There is a good case for changing this business model of NBFCs to reduce risks.

Third, controlling the excesses of complex, opaque and highly risky derivatives associated with a number of financial stress and crises, not just the 2007-08 meltdowns, spreading toxic assets across the financial system.

Last but not the least, as Prof. Roubini and Prof. Mihm mentioned, crises can't be abolished, they would reappear in new forms but they need not loom large or threaten economic existence by catching governments and regulators unprepared.