If the aggregate demand for credit does not rise, clearly, 75% of the Aatmanirbhar Bharat Abhiyan package would simply fail to stimulate the economy 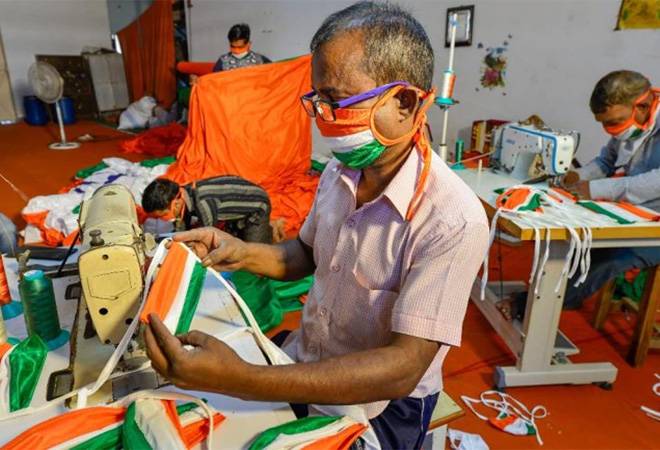 COVID-19 presents unprecedented challenges for the Indian economy and the government has been on its feet trying to mitigate the negative impact of this unprecedented crisis.

Yet even well-intended policies will fail to do any good if the problems lie structurally elsewhere. This is best elaborated by the case of government's policy stimulus.

Following the COVID-19 lockdown, the Centre announced an 'Aatmanirbhar Bharat Abhiyan' (ABA) package in mid-May, which amounted to 10.3% of GDP, to stimulate the economy.

While the direct fiscal stimulus was less than 1.3% of the GDP, more than 7.8% of GDP was about providing easy credit to the MSMEs and the farmers and liquidity infusion by various RBI measures.

Out of the Rs 21 lakh crore package, Rs 9.73 lakh crore has been accounted for by the potential liquidity injection into the banking and financial system through various measures of the RBI (Rs 8 lakh crore) and otherwise, and Rs 6.25 lakh crore for the expected collateral free or partially guaranteed easy loans (even with lower credit ratings) to the MSMEs, farmers and so on.

The rest of the package is about off-budget fund building of Rs 1.7 lakh crore, revenue foregone of Rs 58,000 crore, Rs 40,000 crore extra allocation for the Mahatma Gandhi National Rural Employment Guarantee Scheme (MGNREGS), and Rs 1.7 lakh crore of PM Garib Kalyan Yojana for the mere survival of poor people in the country.

Therefore, more than three-fourth of the ABA package is about potential liquidity infusion and expected increase in the credit offtake at aggregate level.

The realisation of this potential liquidity infusion into enhanced credit offtake is conditional on the demand for credit in the market. Easy loans would boost aggregate demand for credit if, and only if, the MSMEs and the farmers do not substitute their past debts with these easy loans.

The aggregate demand for goods and services again is dependent on the income and purchasing power of people, which has come down drastically, at the aggregative level, due to the COVID-19 lockdown.

The central bank has been on a repo rate-cutting spree (rate at which commercial banks can borrow from the RBI), resulting in an all-time low repo rate of 4% in May 2020 to make it easier for the banks to meet the increased demand for credit, if any, at a lower interest rate.

Additionally, the reserve ratios have been lowered to enable commercial banks to provide more loans to the investors, given their deposit base.

However, if the easier loans had been taken in addition to the existing loans, the credit-deposit ratio of all the commercial banks operating in India (taken together) would have increased, at least after the announcement of the ABA package in mid-May.

That is, the credit offtake from the commercial banks would have increased relative to the (demand and time liabilities) deposit base with the banks.

Also, if there is a higher demand for credit in the market, the banks would invest less in government and other approved securities (in case they hold extra securities over the SLR norms) and supply more credit at a relatively higher interest (lending) rate because even the floor lending rate is always substantially higher than the expected average rate of return on the government securities.

Therefore, the potential infusion of liquidity would actualise and enhance the purchasing power of people to stimulate the aggregate demand only when extra credit is taken from banks and gets invested on the ground. However, the available data tells us a completely different story altogether (see the graphs below).

We have based our insights on the data related to the business of commercial banks in India from the various issues of weekly statistical supplements of the RBI from January 3 to June 19 of this year.

It is evident that the credit-deposit ratio started falling quite steadily after March 27 following the lockdown, (a decline from 76.4% on March 27 to 73.5 on June 5) and the banks' investment in government securities have gone up as a proportion of the total credit delivered (plotted along the secondary axis in the first panel) consistently after March 27 (from 35.6% on March 27 to 40.4% on June 19).

Even on March 27, the banks' investment in government and other approved securities was more than 30% of their net demand and time liabilities (NDTL), which was way above the statutory reserve requirements. Therefore, the reserve ratios were not binding constraints in any way.

The central bank's motive behind the reduction in the reserve ratio was to expand the bank's deposit base as it expected that there will be an increase in credit demand and a decline in bank deposits in the future.

Consequently, injecting liquidity into the banking system has failed to boost the growth of credit because the problem is not the scarcity of liquidity but that of the demand for credit.

The last observation of June 19 has shown some improvement in the credit-deposit ratio, but it is not because of increase in the credit offtake but due to the reduction in bank deposits (see panel 2 of the graph). Some people must have started withdrawing money for their consumption expenditures from their past savings due to the lack of income caused by the lockdown. 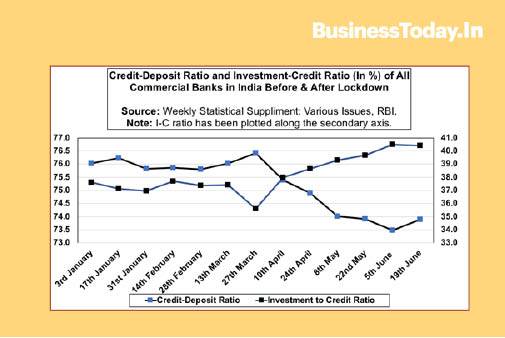 The main cause of concern is that the demand for credit is not picking up. That will not increase until and unless the aggregate investment demand rises and that will not rise unless business sentiment about the size of the market improves.

If the aggregate demand for credit does not rise, clearly, 75% of the ABA package would simply fail to stimulate the economy. The unemployment rate would be skyrocketing, the growth rate would be hugely negative and the profit, as well as the wage rates, would be extremely low - the economy would enter into a severe depression.

It is not that nobody would take collateral-free loans with the government guarantee even with low credit rating. Many would take this opportunity to demand loans under these easier terms, however, that does not necessarily mean that the aggregate credit offtake or investment would rise in the economy.

There is always the option of substituting past loans of businesses with these fresh loans with full or partial government guarantees. If those businesses make losses in future and generate non-performing assets (NPAs) with the banks, the government has to write the bad-debts off using taxpayers' money.

Basically, it is a mechanism of risk-diversification - to bring investors' confidence back. The government is providing guarantee to the businessmen (with Rs 100 crore annual turn-over or less) that their losses, if any, would be fully or partially borne by the government (or the tax-payers).

Socialisation of risks of MSMEs and farmers is not a bad idea in the short-run to revive investors' confidence however, this is surely not sufficient to bring investment rate back to the level which, would be able to absorb the existing labour-force in the country.

The loss-making private businesses would be protected by taxpayers' money however, the investors would not make the investment to incur a loss. Until and unless the aggregate demand revives by enhanced purchasing power of common people, the aggregate private investment will not reach a sufficient level.

This is important for the lives of such a gigantic population in India under capitalism. The government must go for expansionary fiscal policy (Keynesian demand management policy) financed by short-term monetisation.

The frontloading of government expenditure through deficit financing with universal employment of last resort programme (with enhanced wages) is the need of the day. An increase in government expenditure on health and education would reduce the out of pocket expenses of people on these services, which, in turn, would enhance the purchasing power and revive the aggregate demand.

While there could be a huge revenue shortfall for the government, this is not the time to pursue fiscal conservatism. Hopefully, the government ponders over these concerns sooner rather than later.

(Surajit Das is an assistant professor, Vaishali, and Kirti Jain have done their masters in economics from the Centre for Economic Studies & Planning, Jawaharlal Nehru University (JNU), New Delhi.)

Rebooting Economy VI: Is Modi govt ignoring job crisis in India or unable to tackle it?

Rebooting Economy VII: Where are the green shoots in Indian economy?