Not surprisingly, the Easter blasts that killed hundreds in Sri Lanka have revealed a Pakistani connection. 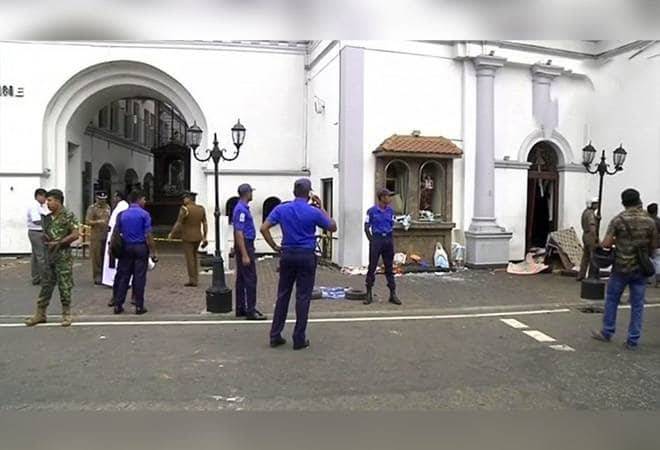 Wherever there is a terror attack, chances are you will find Pakistani fingerprints all over the place. From Times Square in New York to the streets of Kabul and of course across India, virtually every bombing can be traced back to the terror factories located in Peshawar, Bahawalpur or Karachi. Not surprisingly, the Easter blasts that killed hundreds in Sri Lanka have revealed a Pakistani connection. Among the suicide bombers was Zahran Hashim, an Islamist extremist imam, who is believed to have visited Pakistan in 2018.

Hashim was a demagogue for the National Thowheeth Jamaath, which was known in Sri Lanka for vandalising Buddhist statues, but has the larger aim of spreading global jehad. His speeches are straight out of the Islamic State's playbook, inciting Sri Lankan Muslims to attack Buddhists, Hindus and Christians.

Islamic terrorism in Sri Lanka seems counter intuitive because the country's less than 10 per cent Muslim minority has no beef with the 70 per cent Buddhist majority. To get to the root of Islamic terror in the island nation, one must understand the outlook of the Sri Lankan Muslim.

Decades before the Gulf sheikdoms and ISIS had started exporting the doctrine of jehad, Sri Lankan Muslims had become infected with the virus of fanaticism. Sabiha Hasan, a Karachi-based researcher, writes in Pakistan Horizon (Vol. 38, No. 2) that in the 1940s when Indian Muslims "demanded a separate homeland for themselves, Sri Lankan Muslims supported their struggle". Basically, Sri Lankan Muslims were supporting India's breakup despite having no skin in the game.

Instead of being wary about the extraterritorial loyalties of its Muslim population, Sri Lankan politicians went full-tilt chummy with the country that its Muslims identified strongly with - Pakistan. The heads of state of both Sri Lanka and Pakistan exchanged official visits. In 1954, Sri Lankan Prime Minister John Kotelawala said in Islamabad: "We were so close to each other. We should know each other better and try to help each other."

During the 1971 Bangladesh crisis, after India withdrew landing and overflight rights to Pakistan, Sri Lanka granted refuelling facilities to Pakistan International Airlines. In March-April 1971, as the Pakistan Army launched Operation Searchlight to crush the Bengali independence movement in East Pakistan, Pakistani civilian and military aircraft made 174 landings at the Katunayake international airport. While Sri Lanka denied these aircraft were ferrying soldiers or weapons, in reality they were purely military flights that transported thousands of heavily armed troops who killed three million Bengali citizens over the next eight months.

Ironically, as Pakistani military flights passed through Katunayake in April 1971, a contingent of Indian Army troops was guarding the airport during a communist insurgency that took 10,000 lives across Sri Lanka. Indian Navy warships were also deployed off Colombo to defend the port.

The bonhomie continued after the war. In December 1976, the Colombo Municipal Council named a public ground in the national capital as Jinnah Maidan.

War in the north

It was during the civil war involving the Liberation Tigers of Tamil Eelam (LTTE) that the Pakistani military and its shadowy spy agency Inter-Services Intelligence (ISI) was able to develop close links with Sri Lanka's military. In May 2008, Lt. Gen Sarath Fonseka, the chief of the Sri Lanka Army visited Islamabad with a shopping list that included 22 tanks, hundreds of thousands of grenades and other weapons and ammunition. The deal was worth over $100 million. According to 'The News' of Pakistan, as part of the cooperation, PAF pilots participated in air strikes against LTTE bases in August 2008. Islamabad also positioned a group of Pakistan Army officers in Colombo to guide the Sri Lankan security forces in their operations.

According to Bahukutumbi Raman, who headed the counter terrorism division at the Research and Analysis Wing, Pakistan's military assistance took on an ominous turn in September 2003 after the unpublicised visit of General Mohammed Aziz Khan of the Pakistan Army to Colombo. Since the Indian policy was to defeat the LTTE - without overtly entering the conflict - New Delhi had never objected to the growing military ties between Sri Lanka and Pakistan, but Khan's secret visit upset Delhi. The Tamil Guardian says this was because Khan "had co-ordinated Pakistan's proxy war against India through various jehadi terrorist organisations" and "played an active role in the clandestine occupation of Indian territory in Kargil".

The Dawn newspaper reports that in 2011 the then Pakistani President Asif Ali Zardari offered training to Sri Lankan police and intelligence agencies.

The ISI had for years been trying to get a foothold in Sri Lanka. Since it could not obviously get sympathisers among the country's Buddhists, Hindus and Christians, the spy agency's hope lay with the Muslim minority. However, the LTTE's dominance prevented outsiders from setting foot in these areas.

In fact, the LTTE had expelled most of the Sri Lankan Muslims from their coastal enclaves in the east, after the Tigers discovered they were collaborating with the government forces. Despite being condemned to second class status by the Sri Lankan constitution, the Muslim population - largely of Tamil origin - refused to join the Tamil struggle for equal rights. Their refusal to support the Tigers is reflected in Zahran Hashim's words: "The loyalty of Muslims should only be for the nation ruled by Muslims."

After the Sri Lankan security forces eliminated the LTTE with help from Pakistan, the field was safe for the ISI to move in. The long interaction between the Sri Lankan security forces and the free hand given to Pakistani military and spies no doubt allowed the ISI to develop contacts among the local Muslims once they returned to their eastern strongholds. According to Ceylon Today, the ISI has used the banned terror outfit Lashkar-e-Taiba and its charitable wing, the Idara Khidmat-e-Khalq, as proxies to radicalise Sri Lankan Muslims.

Madhura Seneviratne of Australia's government owned Special Broadcasting Service reveals Pakistan's motives: "Using Sri Lanka as a staging post, the ISI's primary and apparent objective is to encircle India from all sides. It wanted to use the island nation to access south India, both in terms of finding terror networks as well as for recruitment of cadres."

N. Manoharan of the Institute of Peace and Conflict Studies explains why Sri Lanka has entered into a Faustian bargain with the jehadis in Pakistan: "Pakistan's activities in Sri Lanka have not been seen with suspicion by the security establishment of the island state. Sri Lanka-Pakistan relations have been good without any irritants. Sri Lanka is ever grateful to Pakistan for all the military support during the Eelam War. In addition, when Sri Lanka was hauled (up) by the international community for human rights excesses during that war, Islamabad rendered unstinted diplomatic support."

Clearly, despite the collapse of Sri Lanka's once vibrant economy due to the civil war, the Sinhala elites have learnt nothing. It was their Apartheid-like policies aimed at the Tamils that resulted in the rise of the LTTE. Now, their carte blanche to the ISI could spawn more Islamic terror groups like the National Thowheeth Jamaath which could send the country into another cycle of violence.

The ISI penetration of Sri Lanka presents a huge threat for India. In 2013, the National Investigation Agency (NIA) arrested two Sri Lankan Muslims, Mohammed Sakir Hussain and Suleman Hussain, and an Indian Tamil, Thameen Ansari, on charges of spying. All three confessed that their handlers were agents posted at the Pakistani High Commission in Colombo. In 2014, the NIA arrested a third Sri Lankan national named Arun Selvarajan in Chennai for spying on behalf of the ISI. Selvarajan's arrest indicates that Pakistan has been able to make inroads into peninsular India.

The ISI's Sri Lankan bureau has collected information on a large number of strategic assets in Tamil Nadu and its neighbouring states. Sri Lankan Muslims were able to easily blend into the local population and do the recce work for the Pakistanis. According to Manoharan, the ISI has already obtained data on critical assets including the Kalapakkam nuclear plant, NSG hub in Chennai, Coast Guard installations on the eastern coast, Officers Training Academy in Chennai, and the ports of Nagapattinam, Chennai, Ennore, Vizag and Kochi. "Going by the confessions of the arrestees, information gathering was meant for planning a terror attack," he says. "The first ever terror attack in Chennai in May (2014) was not unconnected to the larger ISI plot."

India must accept a large part of the blame for the mess in Sri Lanka. Firstly, by refusing to carve out an independent Tamil Eelam, New Delhi failed to protect the interests of the Sri Lankan Tamils. At the very least, it should have ensured an autonomous Tamil area in the North and East. For, if India could provide special status to J&K then why not provide the same to Sri Lankan Tamils who are more loyal to India than the Kashmiris.

Secondly, if India was prepared to sell out the Sri Lankan Tamils for larger strategic reasons, then it should have got a good value for the deal. Instead, it stood by as both Pakistan and China stepped into the vacuum created by the LTTE's downfall and India's exit. In fact, General Fonseka has gone on record that his country turned to China and Pakistan for military purchases only after New Delhi refused to supply weapons to it.

One way to retrieve the situation is to conduct a massive counter intelligence sweep that will dismantle the ISI network in Sri Lanka. India's advantage is that it still commands goodwill among the island's Tamils who can be relied upon to identify the jehadis. Also, Sri Lanka's cosiness with Pakistan can't be allowed to become a security threat for India. Just as the US won't allow the Russians to meddle in Mexico, India shouldn't permit Islamabad to buy influence in Colombo. First up, the islanders must be told they have to find alternate sources for their weapons and ammunition.

The Sinhala leadership must be reminded that while Sri Lanka is literally in India's backyard, it is thousands of miles from Pakistan. Colombo cannot fight local fires with water from distant shores.

Angel Tax: Many issues still need to be ironed out