Base, precious metals to trade lower, crude oil strengthening to be short-lived

Global equity markets remained mixed after the US Federal Reserve Vice Chairman Stanley Fischer commented on the possibility of rate hike by the end of December despite turmoil in global markets.

Naveen Mathur is Associate Director-Commodities and Currencies at Angel Broking
On a fortnightly basis, global equity markets remained mixed after the US Federal Reserve Vice Chairman Stanley Fischer commented on the possibility of rate hike by the end of December despite turmoil in global markets. However, he also cautioned the markets about troubling external factors such as further Yuan devaluation and plunging oil prices which may complicate the FOMC's decision of rate hike. On the eurozone front, ECB has reduced its growth and inflation forecasts and warned on the possibility of further trouble from China which may pave way for more stimulus programme. Moreover, IMF head Christine Lagarde commented on slower recovery in advanced economies and a further slowdown in emerging nations which may hamper the global growth rate. This weighed on market sentiments prompting the traders to go on a risk-off mode. The Indian rupee appreciated a mere 0.07 per cent in the last fortnight owing to dovish comment by a top official of Federal Reserve which revived the Asian markets including India as the US rate hike could have triggered outflows from emerging markets. Moreover, disappointing release of economic data from the US and China kept the markets in pressure as investors gauge whether or not to place bets in risk assets funded by these currencies. This supported the rupee. Special sessions to discuss and pass the GST Bill by September renewed hopes and boosted confidence. However, unsatisfactory monsoon progress along with lower-than-expected GDP growth figure and growing concerns about China's economy has led to huge foreign outflows.

In the past fortnight, spot gold prices declined by more than 3 per cent while MCX gold prices also declined by same margin. Prices traded near a five-and-a half-year low on strengthening dollar after data showed the US. economy improved in the second quarter, supporting views that the Federal Reserve would lift rates by year-end. Following a two-day policy meeting last fortnight, Fed officials said they felt the economy had overcome a first-quarter slowdown and was 'expanding moderately' despite a downturn in the energy sector and headwinds from overseas. The statement said the US. economy and job market continue to strengthen.

After falling for eight consecutive fortnights, LME Copper prices turned back to the green with prices gaining 3.6 per cent as the Shanghai Composite Index gained composure following news that PBoC allowed pension funds to invest up to 30 per cent of their net assets in stocks, equity funds and balanced funds. Also, a string of mixed economic data from the US fanned expectations of delay in interest rate hike from September 2015 to the end of 2015. However, sharp gains were capped as China's official Purchasing Managers' Index (PMI) stood at a three-year low of 49.7; thereby raising fears that efforts made by the second-biggest economy are yet to bear fruits. Further, demand concerns were intensified as manufacturing activity in the US expanded at the slowest rate in more than two years in August. MCX copper prices surged by 4.6 per cent in the last fifteen days in line with rupee depreciation.

In the past fortnight, WTI and Brent crude oil prices rose by around 15 and 11.5 per cent respectively while MCX crude oil prices also gained by around 15 per cent. The US government data showed a surprisingly large crude stockpile draw that signaled the market may have been wrong in predicting slumping demand for energy. The EIA also reported that the US gasoline demand was up 6.2 per cent from the year-ago period, averaging 9.51 million barrels per day over the past four weeks acting as a positive factor for oil prices.

We expect precious metals to trade lower in the coming fortnight as the Chinese central bank has taken policy actions to control the volatility in equities as well as currency markets. Besides, ECB actions to boost monetary easing programme will lead to the strengthening of dollar in turn negative for commodities including gold and silver.

Crude oil prices have shown strength in the past fortnight on bargain hunting at lower levels and the possibility of an OPEC meeting to discuss the output added momentum. However, it will be short-lived as major fundamentals of the commodity still remain bearish with oversupplies on one hand and rising crude inventories in the US on the other hand.

We expect base metal prices to trade lower as investors will be cautious ahead of crucial FOMC statement wherein the Fed is expected to decide on the first ever rate hike in nearly a decade. Also, Chinese inflation data will be keenly awaited. 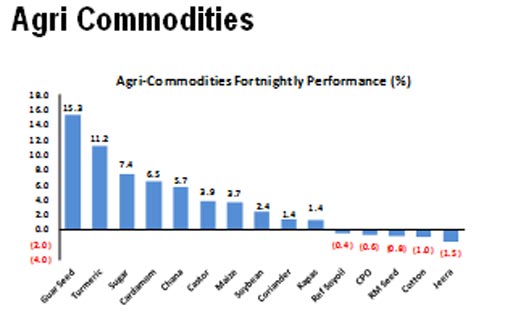 The monsoon season enters its last month with the deficit of over 12  per cent of its normal rainfall. However, August has recorded highest monthly deficiency of monsoon at 22 per cent, which had influenced the commodities prices. The monsoon during July and August is very critical for kharif crop progress while September rains ensure better rabi sowing.

The most active chana Oct NCDEX contract surged 5.7 per cent to close at Rs 4,972 per quintal on limited supplies and pickup in festival demand. The production of chana, last year was less by about 25 per cent compared to target set by Government. India imports more than 60 per cent chana from Australia where the chickpea harvest of new season chana will start in September. The prices in Australia have already firmed on anticipation of good export demand from India.

Soybean traded on positive note on concern over production loss due to drought like situations in Marathwada and deficient soil moisture in some place in Rajasthan and Madhya Pradesh however, record sowing area and higher carry over stock have limit the bullish trend. The active NCDEX Soybean Oct'15 closed higher by 2.4 per cent last fortnight to close at Rs 3,212 per quintal. However, in CBOT, the soybean prices dropped about 2.14 per cent during the fortnight to close at $8.7 per bushel levels on concerns over foreign demand for US supplies. The weather is also favourable for strong yield potential in the US.

RMseed prices during last fortnight dipped 0.8 per cent to close at Rs 4,296 per quintal mainly due to subdued demand for rapeseed meal export. As per the latest SEA data, export of mustard meal during July 2015 is reported at 8,645 tonnes compared to 56,139 tons in Jun 2015, dropped by 84.6 per cent month on month. The global rapeseed production forecast to decline in 2015/16 to 64.6 million tons on lower crop estimates from EU, China, Russia and Canada.

During last fortnight, NCDEX Ref. Soy oil Oct'15 contract dropped 1.3 per cent from its higher levels to close at Rs 564.95 per 10 kg. The soy-oil imports during in calendar year 2015, till July crossed 16.35 lakh tonnes compared to 11.5 lakh tonnes last year. Soybean Processors Association (SOPA) has requested the government to increase the customs duty on crude and refined edible oils by another 30 per cent to encourage domestic production. Similarly, in CBOT, the soyoil prices dropped about 1 per cent during the fortnight to close at 26.84 cents per pound.

The CPO prices during the last fortnight recovered almost 7.2 per cent from its low to close 0.6 per cent down at Rs 377.6 per 10 kg. The recovery is due to lower level buying and anticipation of import duty hike. Meanwhile, the palm oil prices in Malaysia hitting a six-year low last week on weak demand and reports of healthy output. However, the prices have recovered to 2037 ringgit ton from 1,986 ringgit a ton, an increase of 2.7 per cent during the fortnight. The increase is mainly due to weaker ringgit and bargain buying by the traders.

Among softs, cotton prices during last fortnight dipped 1 per cent to close at Rs 16,250 per bales on MCX due to steady demand from ginners and weak international market. India exported about 51 lakh bales in cotton year 2014-15 (Oct-Sep) till 15th Aug. In 2013-14, 111 lakh bales were exported. According to the Ministry of Agriculture, sowing of cotton is reported lower by 8 per cent at 112 lakh ha as compared to last years' sowing till Aug 28, 2015. ICE cotton also plunge by about 6.3 per cent to 62.70 cents/pound levels from 66.91 levels. The fall is due to concerns about world economic growth and demand for the fiber crop. In world consumption, growth will likely be limited in 2105-16, as international cotton prices remain higher than competing manmade fibers. China's imports forecast to decrease by 12 per cent to 1.6 million tons, marking the fifth season of decline after peaking at 5.3 million tons in 2011/12, as per ICAC.

The sugar prices during the last fortnight have surged 7.2 per cent to close at Rs 2,470 per quintal on NCDEX. The price surge is mainly due pickup in festival demand and weak progress of monsoon may affect the production. The news on consideration of ban of sugarcane cultivation and crushing in Maharashtra due to water crisis in Marathwada and western regions supported the prices at higher levels. Internationally, ICE Sugar prices have also surged about 8.62 per cent last fortnight, as Brazilian real saw its sharpest gains last fortnight against the US dollar supporting sugar prices. There is an anticipation of improving demand -supply balance sheet after reports on lower outputs from Brazil as mills opt to use more cane to produce ethanol for the domestic fuels market.

Among spices, turmeric, cardamom and coriander traded higher while Jeera closed negative. Turmeric price surged about 11.2 per cent at NCDEX to close at Rs 8,920 per quintal. This increase is due to good upcountry demand on expectation of lower production during the next season on weak sowing progress in southern states. Similarly, cardamom prices have surged 6.5 per cent during the last fortnight on good export demand and reports of lesser production from second round of picking. Coriander futures prices closed higher by 1.4 per cent at Rs 11,025 per quintal on good demand and limited supplies in the domestic market.

Jeera price plunge about 1.5 per cent to Rs 15,950 per quintal on limited buying by the traders on weak export orders. The jeera export from India may be lower as jeera from Syria and Turkey may come to world market in September-October. Meanwhile, the quality issues and supply concerns may keep the prices volatile.

We expect chana prices to trade higher on expectation of increase in festival demand, limited supply and lower production data by government. Imports prices from Australia and Canada coupled with monsoon progress will also decide the course of chana price.

Crude Palm Oil may trade sideways to negative on reports of supply glut in domestic market due to higher imports. Meanwhile, subdued demand from China and Europe coupled with higher output may keep prices bearish.

We expect cotton to trade sideways due to expectation of higher production prospects and weak international market. While sugar may trade with positive bias on improved demand and fear of El Nino, which may affect sugarcane, crops around the world.

We expect cardamom to trade sideways to positive on lower arrivals from second pickings and good demand from traders. Jeera and coriander prices may trade higher on short supplies and good demand in domestic market.

Turmeric prices may trade sideways to higher, on good upcountry demand however, forecast of widespread rains in southern peninsula may increase production outlook for next year.