Out of Rs 9,870 crore worth of claims, the creditors have received a princely sum of Rs 96 crore - that is right. Less than 1% after more than one year of running around, which will not compensate even the expenses incurred by the creditors

For 970 cases which have been closed through the IBC Process so far, 780 cases were liquidated
Hari Hara Mishra

The cover page of the recently released IBBI Newsletter up to December 2019 starts with a graphic representing the core values of the Insolvency and Bankruptcy Code (IBC). 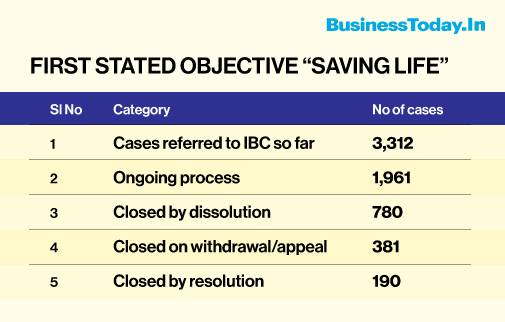 For 970 cases which have been closed through the IBC Process so far, 780 cases were liquidated. Put it differently, 80% Mortality rate in the 'Saving life" process. We will come to the Post- Mortem report too in a while. 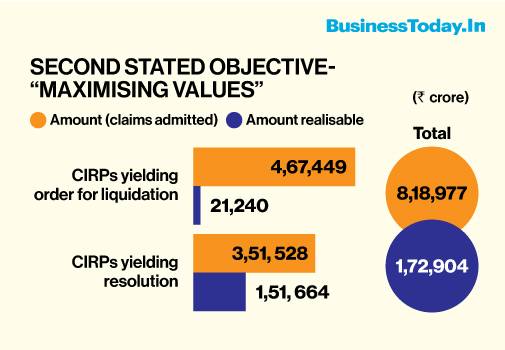 So, for claims amounting to Rs 8.19 lakh crore, creditors have got "Maximum value" of Rs 1.73 lakh crore. Resultant Haircut, whopping Rs 6.46 lakh crore in 970 cases closed, so far.  Hold on, another 1961 cases still under IBC Process. 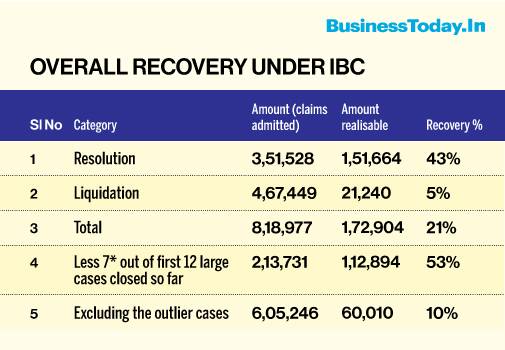 The 7 cases are, Electro steel, Bhusan Steel, Monnet Ispat, Essar Steel, Alok Industries, Bhusan Power & Steel, Jyoti Structures. These 7 cases out of the total 780 cases closed so far are 1% by number but contribute 65% of total amount realisable and distort the correct picture of recovery under IBC in general. Excluding these 7 cases, IBC recovery so far is only 10%. That is where "Value Maximisation" stands.

Now, we focus on post mortem of Liquidated cases

Only 51 liquidations have reached the final stage. Out of Rs 9,870 crore worth of claims, the creditors have received a princely sum of Rs 96 crore- that is right. Less than 1% after more than one year of running around, which will not compensate even the expenses incurred by the creditors.

In essence, many cases referred to IBC finally leading to liquidation may have a negative impact on the creditors.

On third objective, of balancing interest (among various stakeholders), in the absence of sufficient empirical data, we will give it a pass. However, anybody having rudimentary experience in the area understands the huge inter-creditor issues based on security and charge particulars and creditors Vs other stakeholders including statutory authorities for the realisation of their dues.

Finally, as reported in several sections of media, it is heartening to note that people at the apex level, including PMO, have started realising the ground realities. As reported, "In the case of smaller companies (loan size of less than ?200 crore, approximately employing 3,000-4,000 workers), resolution professionals are usually unable to successfully run these companies due to the lack of industry and sectoral knowledge. This invariably leads to unit shutdowns and job losses."

It advises banks not to refer cases below the threshold limit of Rs 200 crore to NCLT, and rather try inhouse resolution including a settlement with the promoter.

Estimation of job loss due to liquidated cases

While data in respect of the number of employees on the roll of companies now facing liquidation and who have lost jobs in the process is not available, an approximated number could be arrived at based on information as reported in media.

Put it another way- For every Rs 1 crore involved - 17.5 number of workers

Before approximating the job losses, let's take cognisance of two important factors which have a significant bearing.

First, In case of liquidations, the IBBI newsletter mentions that in respect of 561 out of 774 (liquidation) cases, were either in BIFR or defunct. So, let us assume that 2 out of 3 cases at present liquidation were already defunct.

Further, as the loan size goes up and mechanisation improves, the number of jobs per Rs 1 crore may come down substantially. Let us assume, it employs only 6.5 workers instead of 16.5 per Rs 1 crore, as applicable for small loans with an outstanding amount of below Rs 200 crore.

Factoring these two, the job losses due to liquidation in IBC Cases may be estimated at 467000/3*6.5 = 10,11,833 (1.1 million). To repeat, it is an approximation and an empirical study on the issue would place the exact number of job losses, that followed liquidation.

(The author is a Public Policy analyst and commentator. Views are personal and do not represent any organisation/industry body he is associated with)