Among 600 penny stocks, at least 166 of them turned multibaggers during the same period with Birla Tyres gaining a whopping 1,443 per cent

If you are a serious investor, genuinely willing to pick winners in penny stocks instead of making speculations, there are ways to go about it
Aprajita Sharma

The classic albeit worrying trend of a bull market is at play again - surge in penny stocks. From over 600 penny stocks - those priced less than Rs 10 -- as of March 24 (the day Nifty hit its lowest level of 2020), the figure reduced to 479 thanks to up to 1,400 per cent rally in these stocks. Among 600 penny stocks, at least 166 of them turned multibaggers during the same period with Birla Tyres gaining a whopping 1,443 per cent.

"I have been added in at least 10-20 WhatsApp groups in last couple of months, which are solely dedicated to tips on penny stocks and multibaggers. At least 200 new investors are there in each group who keep sharing stoploss and targets on such stocks. They are seeing a target of Rs 1,000 on Alok Industries. It means a market cap of Rs 2-3 lakh crore, which is one third of Reliance. It is just not possible. They don't understand basics. It concerns me," says Delhi-based veteran trader Vivek Bhauka.

The thrill of quick riches draws new investors to such stocks, but what they fail to understand is penny stocks are prone to manipulation due to low float and concentration of holding among few investors and promoters. You may not find any buyers when you want to sell your shares on profits, if any.

"The perception that penny stocks are manipulated is true as lot of investors have fallen prey to such manipulation investing in them. Liquidity and volumes are a concern too. Retail investors should use their prudence. In today's scenario, it is important to invest in liquid and well-governed companies," says S Ravi, former chairman, Bombay Stock Exchange and managing partner Ravi Rajan & co. 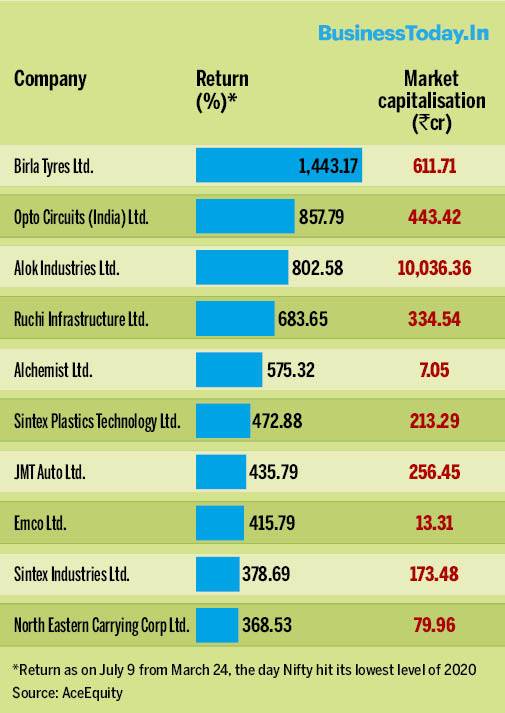 Who should invest in penny stocks

Penny stocks are not for all. Apart from fundamentals, underlying patterns are what draw rally in such stocks. Only those savvy enough to see through these patterns make money in these stocks. Such patterns could either be price momentum, change in volumes due to block deals or change in the company name or management.

Bhauka cites the example of Vikas Proppant. "I bought this stock at Rs 1.5-2. I observed a pattern that the stock had been hitting its fresh monthly upper circuits consistently. The company would make some announcement, and the stock would touch a fresh high. In just three months, the stock went up to Rs 15 from Rs 2. I only rode the pattern. I did not believe in fundamentals or the story that management told. I know I don't trust them, but I can still ride the pattern," says Bhauka.

Similarly, when Indiabulls Integrated (then Indiabulls Wholesale) got listed after being demerged from Indiabulls Real Estate, the very first day of the listing, at least 2 crore of 5 crore listed shares exchanged hands on the bourses. "The deal happened at Rs 5. So, I bought the stock at Rs 7 with a stoploss of Rs 5. Gradually it rose to Rs 30 and in next two years, it hit Rs 800. The company has plans to get into insurance business too. The news worked in its favour. But, I made money spotting volumes data," he says.

How to safely play into penny stocks

In last two decades, more than thousands of listed companies have been suspended from the stock exchanges. A vast majority of it became penny stocks before their eventual suspension. So, there is every possibility that the stock that you choose may fall like ninepins before its ultimate suspension. That said, before you enter into a penny stock, you need to have a well-planned exit strategy. Before eyeing on profits, make allowance for the losses with a strict stoploss. "You have to be ruthless when it comes to penny stocks. No emotion. Consider prices as points. If you have bought a stock at Rs 2, you wouldn't want to sell it at Rs 1. But if you treat it as a game, you would exit just when you make losses because you never know how market will make you exit later. If I know how to exit from a stock, then for me Reliance Industries and Reliance Power both are same," says Bhauka.

How to spot next multibaggers

If you are a serious investor, genuinely willing to pick winners in penny stocks instead of making speculations, there are ways to go about it. "Keep a track of penny stocks which have been hitting 52-week highs consistently. No stock will become multibagger without hitting multiple fresh highs. Once you have a list of it, study their fundamentals. The same holds true for micro and smallcaps also. There could be two types of firms in the list- the likes of Bajaj Finance or Vikas Proppent. Latter is a momentum play but former a winning pick," he says.

Vivek Bajaj, Co Founder StockEdge says Avanti Feeds was around Rs 2 in 2010 and now is around Rs 480 with a market cap of Rs 6,500 crore. "What made it stand apart is its management quality, vision, right sector and unique 'moat' by the company in that business. The company was founded in the year 1993 by renowned industrialist late Alluri Venkateswara Rao with a vision to support the aqua farmers and take the industry to new heights. His son, A. Indra Kumar, a young technocrat, expanded the empire to new horizons following the footsteps of his father. The Blue Revolution characterised by proliferation of aqua farms needed support for their growth. Avanti Feeds met the requirement of a nascent industry by manufacturing international quality feed for shrimp farming," says Bajaj.

Thus, if you do have to pick winners in the existing market scenario, start with selecting sectors which could lead the next bull rally. Bajaj sees NBFC, Consumer Durables, Healthcare, Logistics, Telecom, Capital Goods and Automobile (two-wheelers) as the next growth drivers. Spot the stocks with multiple 52-week highs and zero in on the ones with good fundamentals -- visible revenues and profits and higher promoter holdings. Avoid the ones with heavy debt and higher pledged shares of promoters. But remember that it's a high-gambling game. More often than not people privy to privileged information about these firms gamble in their stocks. If you are experienced enough to take on the risks, you may bet on these stocks, otherwise not more than 5-10 per cent of the portfolio should be exposed to it.