Stating that unsolicited seed parcels could be a threat to biodiversity of the country, the agriculture ministry on August 6, asked all crop-based institutions to remain watchful 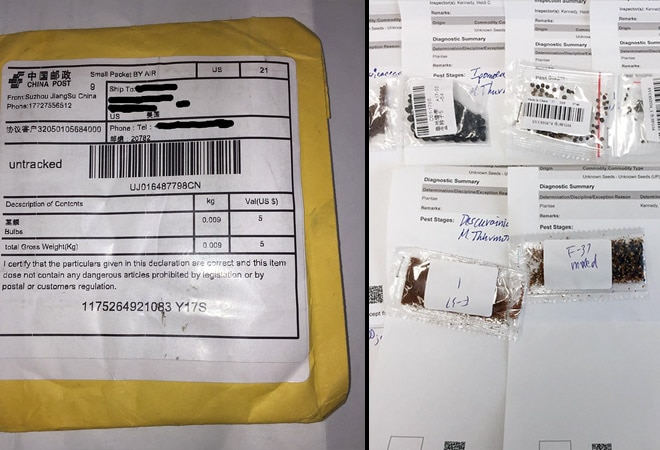 Unsolicited seeds arriving in mail being received by the US Department of Agriculture (USDA), (Photo Source: USDA website)

India's agriculture ministry has put all state governments, seed corporations, certification agencies, producers and agriculture universities on alert following the news of mysterious, unsolicited seed packets reaching the mailboxes of several citizens in the developed world from Chinese addresses. Although India is yet to report such cases, the ministry is vigilant.

Stating that unsolicited seed parcels could be a threat to biodiversity of the country, the ministry on August 6, asked all crop-based institutions to remain watchful. The ministry's response came in the wake of increasing reports of such cases from countries like the US, Canada, the UK, New Zealand, Japan, and some EU nations.

"In the last few months, thousands of such suspicious seed shipments have been reported from across the world. The US Department of Agriculture (USDA) terms it a 'brushing scam' and 'agriculture smuggling' and reports that unsolicited seed parcels may contain seeds of an alien, invasive species or is an attempt to introduce pathogens or disease that may pose a serious threat to the environment, agriculture ecosystem, and national security," according to the agriculture ministry's communication to various government agencies, research institutions, companies, and seed organisations.

"Lot of seed companies carry out seed exchange between these countries. If such seeds come into India, they can spread suddenly and may spoil our ecology and biodiversity. If these seeds contain viruses, then that may affect the animal and then human health," says K. Keshavulu, Managing Director, Telangana State Seed Development Corporation, Government of Telangana.

Keshavulu adds that since India is a big country, "we have to be very careful. All the ports have to be put on alert against what some call seed terrorism and others a brushing strategy." The USDA  defines a 'brushing scam' as a practice where sellers send unsolicited items to unsuspecting consumers and then post false reviews to boost sales. It also points out that brushing scams involving seed packets in international mail shipments are not uncommon and the US Customs and Border Protection (CBP) has intercepted similar seed shipments in recent years. The US is currently investigating the matter and also trying to identify the seeds.

Meanwhile, Chinese Foreign Ministry spokesperson Wang Wenbin stated in a routine press conference on July 28 that China prohibits conveyance of seeds by post. He also clarified that verification of the Chinese addresses found on such packets revealed the addresses were fake with erroneous layouts and entries.

Ram Kaundinya, Director General, Federation of Seed Industry of India stated that 'seed terrorism' is too big a word to use at the moment. "Right now it is only an alert for a possible spread of plant diseases through seeds coming from unauthorised sources without orders. There are limitations to what diseases a seed can carry. Nevertheless, it is a threat," he said.

According to Kaundinya, "these seeds could be of an invasive species or weed which if established in our environment will compete or displace native species. It's best to proactively work to avoid their release than to have to bear huge costs for controlling them in future".

He stressed the need to be careful and not use any seed coming from unknown sources. "Plant quarantine and customs checks at ports and airports have to be stringent. The situation can be handled through vigilance and by following precautions," he articulated.