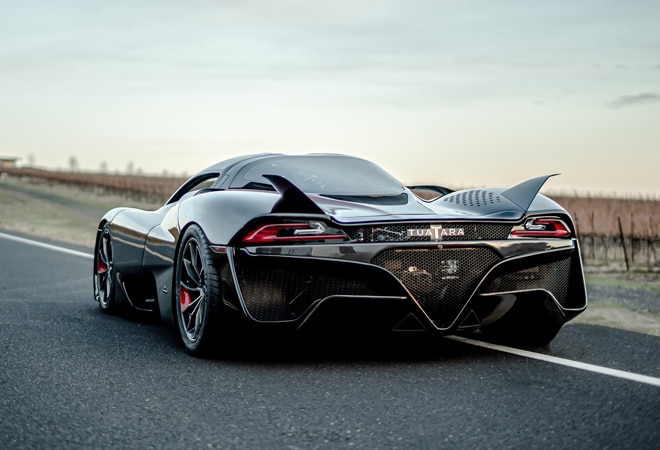 US automaker has made world's fastest car called Tuatara that posted an average speed of 316.11 mph (508.73 km/hour)

US automaker has made world's fastest car called Tuatara that posted an average speed of 316.11 mph (508.73 km/hour). SSC North America is the first hypercar company of the US that has reclaimed the coveted title of world's "Fastest Production Vehicle".

On achieving the title of world's fastest production car, SSC CEO Jerod Shelby said, "It's been ten years since we held this record with our first car, the Ultimate Aero, and the Tuatara is leagues ahead. Its performance reflects the dedication and focus with which we pursued this achievement".

According to Bloomberg Quint, 29-year-old Oliver Webb drove Tuatara, at the speed of 484.53 kmph on first run and 532.93 kmph on his second run in the opposite direction. The average of the two will be counted as the fastest time. The record-breaking event was verified by two witnesses sanctioned by Guinness World Records.  The speed of SSC Tuatara was measured by 15 GPS satellites.

Here’s a little speed to brighten your day. #ssctuatara#savageacceleration#lifebeginsat300#yearofthetuatarapic.twitter.com/2rUNFiYri2

Tuatara has a twin-turbo charged 5.9-litre V8 engine, producing 1,750bhp on E85 ethanol fuel, or a lesser 1,350bhp using 91 octane unleaded. It is built on a carbon fibre monocoque chassis, and the lightweight material is also used for the car's body.

SSC North America was founded by Jerod Shelby in 1998. It is among the most obscure automakers in the world. Theprivately held company was formerly called Shelby SuperCars Inc, which inspired its current name.