The new XUV comes in five diesel variants including an automatic transmission option from the middle variant onwards, priced between Rs 12.32-17.88 lakh. The company has dropped the price of the entry level version by nearly Rs 50,000 compared to the outgoing model. Domestic utility vehicle major Mahindra & Mahindra on Wednesday launched a refreshed version of its full-sized seven-seater SUV, XUV 5OO, as it looks to wrest control over utility vehicles in India, a segment it once lorded over.

The changes in the new XUV include  a new grille with chrome garnish, a tweaked front bumper, new triangular tail-lamps mounted under the rear windscreen and a restyled tailgate with chrome accents above the license plate housing. Higher-spec trims of the SUV also come with a dual-tone faux skid plate, while the re-profiled headlamps get projector units and LED Daytime Running Lamps (DRLs). In terms of equipment, the infotainment system has been updated to function with the new smartwatch app via Bluetooth. 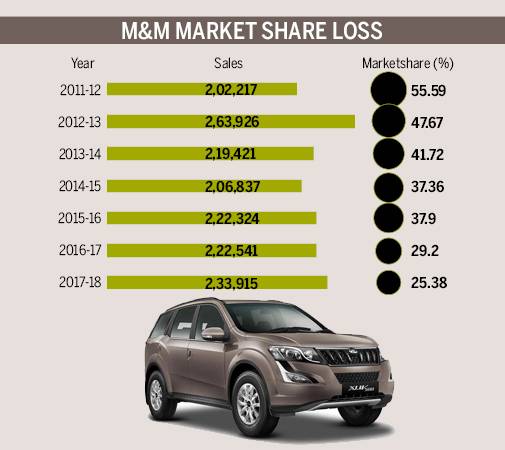 While the engine under the hood is the same 2.2 litre mHawk diesel, it has been tuned to offer 15 bhp more at 155 bhp and 30 NM of torque more at 360 NM. The increase in power is due to a new sixth-gen ECU- and acceleration-controlled turbo. The lone petrol engine has a peak power output of 140 bhp.

The new XUV, which was the first monococque SUV designed by an Indian carmaker, comes at a time when Mahindra has been under attack from all sides and has seen its share in the market slide by more than half from 55.6 percent in 2011/12, the year the XUV was first launched, to just 25.4 percent in 2017/18. (see chart) Mahindra's overall utility vehicle sales grew by only 5.1 percent in fiscal 2018 against an industry growth of nearly 21 percent.

Though the impact has largely been due to the launch of the Maruti Brezza a couple of years back--Maruti has become the new leader in the segment with a 27.5 percent share and a volume growth of 29.6 percent in fiscal 2018 -- the XUV is also under pressure from Jeep Compass that was launched in mid 2017. Despite being a 5 seater and a more expensive vehicle, Jeep has outsold the XUV in four of the last six months. During that period Compass' tally stood at 14,252 units against XUV's 11,129 units. For the full fiscal 2018, XUV's tally was 25,413 units. In 2012/13, its sales had hit a peak of 45,418 units.

Activa pips Splendor again, strengthens its hold at the top

RBI may have a shortage of ink and currency paper: Report