In its very first month, Maruti's new hatchback S Presso entered the list in the 8th position while another new entrant Kia Seltos logged its best ever sales in a month in its short three month lifespan with 12,854 units 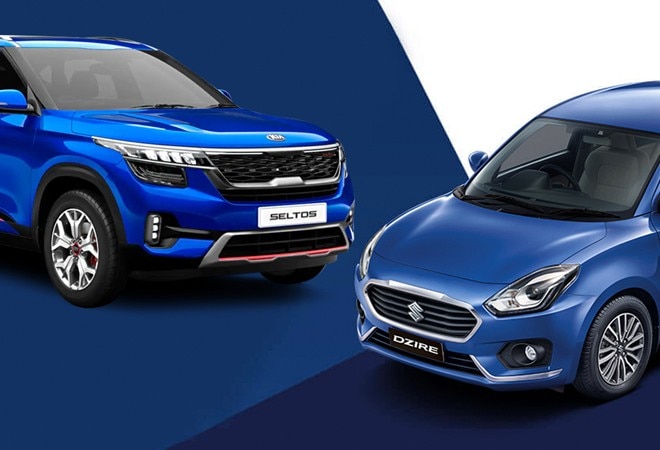 Maruti Suzuki Dzire was the bestselling vehicle in October 2019

After posting a growth in sales for the first time since February, India's largest carmaker Maruti Suzuki India Ltd, has unsurprisingly monopolised the list of top 10 bestselling cars in October with 8 models.

In its very first month, Maruti's new hatchback S Presso entered the list in the 8th position while another new entrant Kia Seltos logged its best ever sales in a month in its short three month lifespan with 12,854 units. It was the 7th largest selling car in the month.

Already the Seltos's tally in October, with which it single handedly pulled Kia as the overall fifth largest carmaker in India, was higher than what arch rival Hyundai Creta has ever sold in a month in its four year hegemony in the mid-size SUV segment. Seltos has now outsold the Creta in each of the last three months. Creta's sales of 7269 was almost 38 per cent less than October 2018. The keenly anticipated rivalry is increasingly becoming one sided. The bestselling car last month was the Maruti Dzire, which posted a 12.44 per cent growth at 19,569 units followed by the Swift which grew a similar 12.7 per cent during the month at 19,401 units. Maruti Alto, which has long held the pole position in India registered a near 20 per cent decline in sales 17,903 units. Dzire has now outsold Alto in each of the last four months and with the latter expected to get stiff competition from S Presso, there maybe a change of guard at the top at the end of this fiscal year. Alto has been the bestselling car in India for the last 15 consecutive fiscals.

The two other cars to register a year on year decline during the month were Maruti Baleno, down 13 per cent at 16,237 units, and the Brezza compact SUV which registered a 35.4 per cent decline in sales at 10,227 units. Brezza is facing stiff competition from Hyundai's new launch Venue, which upstaged it for two months in July and August. Massive discounts and a 5-year warranty on its diesel engine has however put some sail to the Maruti product and it has managed to reclaim its crown. Venue's tally during the month was 8,576 units.

Besides Seltos, the only other non-Maruti product in the top 10 was the Hyundai Elite i20 which registered a 10.48 per cent growth in sales in October 2019 with 14,683 units. The biggest disappointment was the new Hyundai Grand i10 Nios which saw a 16.47 per cent decline in sales at 9,873 units. Grand i10 has been a regular in the monthly top 10 list and Hyundai had given it a full lifecycle facelift with the Nios suffix in August hoping it would give a boost to its sales. The results so far have been underwhelming.

The performance of the Wagon R, which also like the Nios got a full lifecycle facelift in February, was a stark contrast. As the sixth largest selling car in the country, its sales grew nearly 35 per cent at 14,359 units last month. Maruti's Eeco utility van also registered a 49 per cent plus jump in sales at 10,011 units benefitting from the exit of the Omni van that was discontinued in May as it did not comply with new safety norms.

ALSO READ:October auto sales: Festive season pulls auto industry out of red but the joy could be short-lived