Royal Enfield Interceptor 650, Continental GT 650 unveiled in India, will be available by April 2018

Powered by an all new 650cc and air cooled parallel twin engines with oil cooler for enhanced performance, the motorbikes, built for both city-riding and highway-cruising, can deliver 47PS of power at 7,100rpm and a peak torque of 52Nm at 4,000rpm. 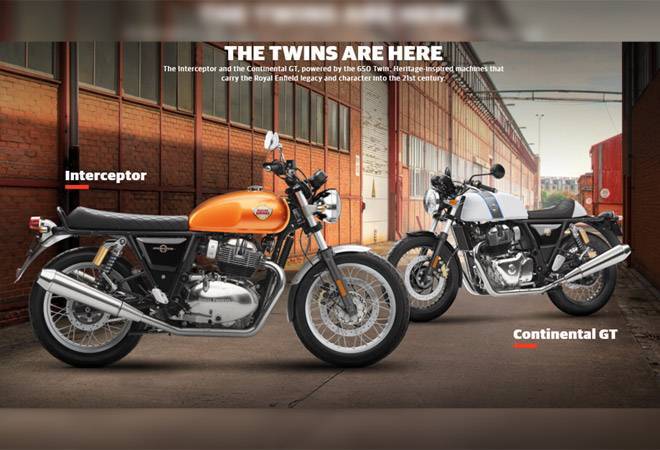 With an aim to appeal modern as well as heritage riders seeking "more" from the Royal Enfield, the motorbike major unveiled Interceptor GT 650 and Continental GT 650 during its annual rider mania in Panaji on Sunday. The two motorcycles were also unveiled at the EICMA motorcycle show in Italy's Milan on November 7.

Powered by an all new 650cc and air cooled parallel twin engines with oil cooler for enhanced performance, the motorbikes, built for both city-riding and highway-cruising, can deliver 47PS of power at 7,100rpm and a peak torque of 52Nm at 4,000rpm. The company claims these motorbikes can cruise at a speed of 120-135kmph.

Globally, the twins have been built to compete with the likes of Harley Davidson Street 750 and Triumph Street Twin. They can run at a speed of 150Kmph on European and American roads.

Royal Enfield chief executive officer and managing director Siddharth Lal said: "Both the Interceptor 650 and the Continental GT 650 will be very accessible motorcycles in India in terms of both pricing and maintenance." He added the company wanted to upgrade its 2.5 million customers in India who "wanted more from the Royal Enfield". "The new motorcycles will be available in the showrooms by March or April," he said, hinting they would be priced between Rs 3 lakh and 3.5 lakh, reported IANS.

The gearbox has a new feature, 'slip/assist' clutch, which will provide easy-riding experience in traffic with a light feel and prevent wheel-hop when downshifting gears.

The Interceptor 650, engineered to handle different terrains and control speed with ease, has been designed keeping in mind the idea of the 1960's fun, relaxed motorcycles from the sun-drenched California beaches. While Interceptor is equipped with a classic 'tear-drop' fuel-tank, twin-seat and wide braced handlebars, the Continental GT 650, just like Continental GT 535, retains the same headlamp, fuel tank and its many other features, except the rear that has a new dual side exhaust muffler. "While for our large customer base in India, the new 650 twins will be a compelling upgrade, we believe it will attract customers from other developing markets in SouthEast Asia and Latin America to graduate to the middle weight segment," said Lal.

Apart from Standard and Retro Custom colours, the motorcycles will be available in a variety of colours.