Notably, according to Rule 24 of the Aircraft Rules, crew members are not allowed to consume alcohol 12 hours before the commencement of a flight. In the past four years, 171 pilots were caught drunk before taking off from airports in India and abroad. The alarming number of "high flying" pilots was revealed by the Directorate General of Civil Aviation (DGCA) under the Civil Aviation Ministry in response to an RTI query filed by India Today.

The figures are staggering. 57 pilots were held at Delhi airport and 43 at Mumbai airport. Two pilots were found drunk at Dubai airport, one in 2016 and another in 2017, whereas one pilot failed the breath analyser test at Sharjah Airport in 2015.

And more than 40 pilots have been failing the breath analyser test every year.

Crew members have to take a compulsory breath analyser test before the departure of flight. It is a measure to determine the concentration of alcohol in their blood stream. Notably, according to Rule 24 of the Aircraft Rules, crew members are not allowed to consume alcohol 12 hours before the commencement of a flight.

In response to India Today's RTI on what action has been taken against the drunk pilots, the DGCA said, "The privileges of pilot licence held by these pilots were suspended as per the proviso of the CAR Section-5, Series-F, Part-III".

India Today also inquired about the names of the airlines that these pilots belonged to, but the DGCA refused to divulge any names. "The details of airlines cannot be provided, as the information is exempted from disclosure under Para 8 Sub Para (1) (d) and (e) of RTI Act 2005," DGCA said.

However, Air India did divulge the details of its pilots who were caught drunk in response to another RTI filed by India Today. 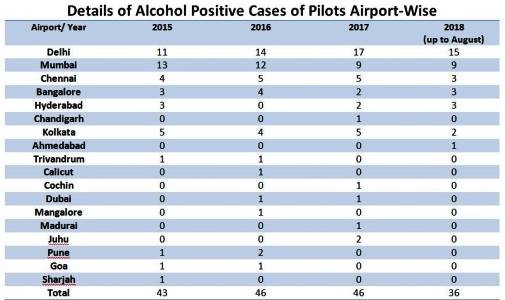