IndiGo has confirmed that a baby boy was delivered prematurely on flight 6E 122 from Delhi to Bengaluru; since baby boy was born, its photos and videos have gone viral on social media 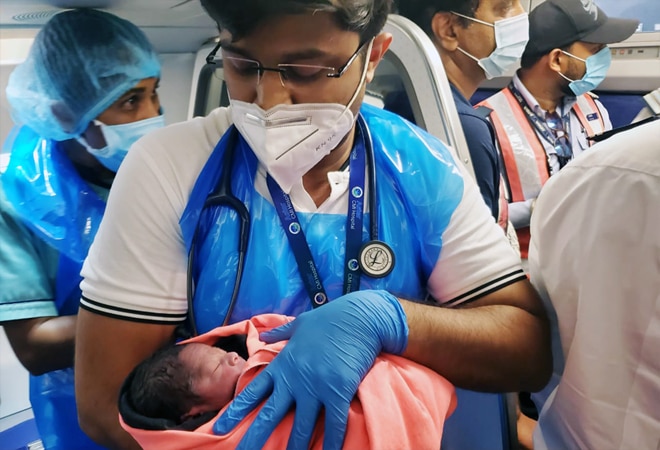 A woman delivered a baby boy aboard IndiGo's Delhi-Bengaluru flight on Wednesday, IndiGo said in an official statement. "We confirm that a baby boy was delivered prematurely on flight 6E 122 from Delhi to Bengaluru. There are no further details available," IndiGo said in a response to PTI.

The baby boy was born en route Delhi-Bengaluru 6E-122 flight that landed at the Bengaluru airport around 7.30 PM on Wednesday. Since this is a unique incident, IndiGo may now offer free tickets to the baby boy for life, sources told India Today. Ever since the baby boy was born, its photos and videos have gone viral on social media.

In a series of pictures shared on Twitter, IndiGo airline crew can be seen holding the baby and clicking pictures. The ground handling staff also welcomed the airline crew with a note, saying 'Welcomes you to Namma Bengaluru'.

A baby boy was born on board Indigo flight from Delhi to Bangalore today. In all likely baby is getting life long free @IndiGo6E free ticket. Great work by Indigo crew today. Kudos to the team @IndiaTodaypic.twitter.com/mxn16dgigf

Meanwhile, Twitterati have a mixed reaction to the incident. While some people appreciated the mother as well the newborn for the courage, others criticised the airline for allowing a woman at such a critical stage of her pregnancy to board the plane.

"Awwwwwww this is so sweet.... Such A wonderful gesture.... Welcome new born baby doll...," a twitter user said.

Another user commended the IndiGo team for their efforts. "I must applaud the courage and bravery your team showed last evening," he said.

"Delhi to Bangalore takes at least 2 hrs, how come they allowed her to board," questioned a user.

Another user asked why a pregnant lady at such a critical stage of pregnancy was allowed to board the flight. "How she got no objection certificate from the doctor? As this can be fatal for both Mother and Child in case of more blood loss," she said.

"Both the mother and baby are extremely lucky that the birth was uneventful. It would be foolish for others to even wish something like this happening to them. Personally I feel that childbirth happening anywhere outside of a well equipped medical set up is fraught with risks," another user opined.