Under the UDAN scheme, nearly 50 per cent of the seats on every flight will cost Rs 2,500 per seat. This will be applicable for flights where the distance is less than 500 km and duration is one-hour. 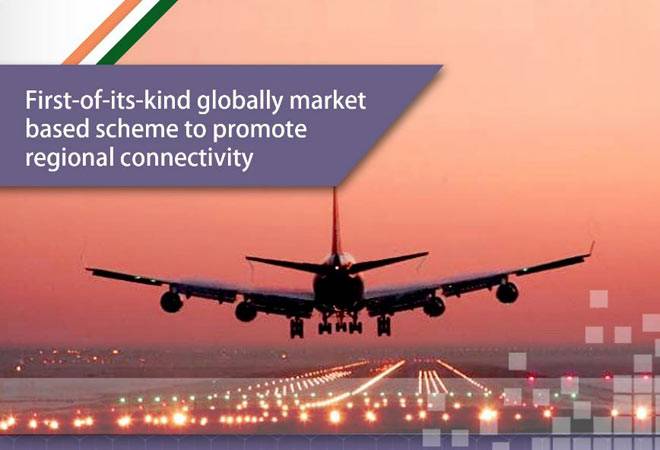 The government on Thursday announced the list of airlines that will be connecting several unserved and under-served airports in the country.

Five airlines which have won bids to operate on 128 routes will be linking 70 airports. Out of 70 airports, 31 are unserved and 12 under-served.

Carriers which will operate flights out of these airports include Air India's subsidiary Alliance Air, Air Deccan, SpiceJet, Air Odisha and Turbo Megha.

Under the UDAN (Ude Desh ka Aam Naagrik) scheme, nearly 50 per cent of the seats on every flight will cost Rs 2,500 per seat. This will be applicable for flights where the distance is less than 500 km and duration is one-hour.

The Udan scheme offers subsidy to airlines on these routes, route monopoly for three years and a host of other concessions at landing airports.

Tourism is one area which has not been given the due attention. Agra and Jaipur witness thousands of foreign tourists every year. However, there is no direct air link between the two cities, making it inconvenient for tourists who have to come back to Delhi to visit Agra.

The situation is similar at other tourist places, if not worse. Despite having an airport, there is hardly any flight landing in Shimla.

Some of the tourist destinations which will now be connected under UDAN scheme include Agra, Shimla, Puducherry, Jaisalmer, Porbandar, Diu, Gwalior, Kullu, Pantnagar, Shillong and Mysore.

UDAN scheme is expected to create thousand of new jobs in the interiors of the country. Aviation has a multiplier effect on the economy. There will be requirement of security personnel and ground staff for the upkeep of the airports.

Besides helping the middle-class fly for cheaper prices, UDAN will also make it easier for business people to make it to the tier-2 cities. This will give a huge fillip to investments in India's hinterlands.

The routes of Prime Minister Narendra Modi's Regional Connectivity Scheme (RCE) are spread out across all corners of the country. New carriers which have won bids to operate flights on these routes can partner with other airlines to offer connecting flights.

"This will have a positive effect on the economy, in terms of employment and investment," Raju added.

With the help of UDAN, the local connectivity is set to get a major boost. Besides helping people connect with friends and families, the new scheme will also be helpful in getting skilled workforce to smaller towns as they will able to cut short on their travel time and fly back to their home cities after work.

Good news for fliers! No stamping of handbag tags at 7 airports from April 1