Jet vs Air India: In a race to the bottom, which airline is beating the other?

Despite its troubles, it seems that Jet is in better condition than Air India, at least in terms of operational parameters. 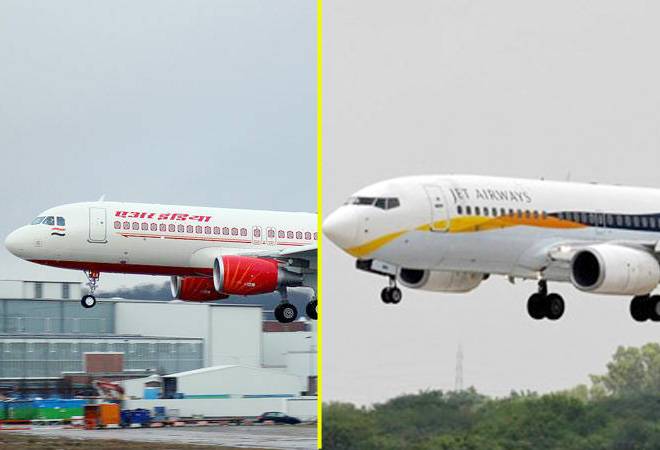 The aviation sector has suffered a big blow since the international crude oil prices have started to move up early this year. Airlines across the board have to bear the brunt of high ATF prices coupled with depreciating rupee and intensified competition. The impact on private carrier Jet Airways and state-run Air India seems to have been more pronounced.

Despite its troubles, it seems that Jet is in better condition than Air India, at least in terms of operational parameters. The last declared results for AI - in 2016/17 - showed that the national carrier couldn't benefit from the up-cycle in the sector, and reported a net loss of Rs 5,765.16 crore. Jet, on the other hand, reported net profits of Rs 438.45 crore in the same financial year. While Jet Airways has reported losses for two consecutive quarters of 2018/19, the financial numbers of Air India, being a non-listed entity, has not yet come out.

In terms of operational performance, Jet has been consistently ahead of Air India, in the recent months, in areas like lower cancellation rates, passenger complaints per 10,000 passengers, on-time performance (OTP), and market share. In addition, Jet has reported higher passenger load factors (PLF) than AI in seven out of past 10 months of 2018.

The OTP rates of Jet at four major airports - Bangalore, Delhi, Hyderabad and Mumbai - stood at 85.9 per cent, 86.6 per cent, and 82.6 per cent in three months to October. Air India's corresponding OTP stood much lower at 74.7 per cent, 74.3 per cent, and 75.3 per cent. Broadly, it shows that nearly one out of every four flight operated by AI at four metro airports were not on time. OTP is an indicator of whether an airline is operating flights on time, and plays a major role in building brand perception.

Similarly, airlines with higher cancellation rates are not preferred by passengers in general. In this parameter too, AI has not fared well when compared with Jet. AI (domestic) had cancellation rates of 4.17 per cent, 1.6 per cent and 3.17 per cent in three months to October. Jet Airways' corresponding rates were 0.15 per cent, 1.2 per cent (including JetLite), and 0.69 per cent.

After the initial reports of Tata Group showing interest in acquiring beleaguered Jet Airways, the deal seems to have been stuck with board members of Tata Sons raising objections. AI, on the other hand, is looking for fresh funds after failing to attract potential buyers last year.

The other major indicator is market share (for the scheduled flights) where there's a significant difference between Jet and AI in both domestic and international segments. In 10 months of 2018, Jet, along with its subsidiary JetLite, has flown 24.96 million passengers in domestic and international routes whereas AI, and its subsidiaries Air India Express and Alliance Air, have flown 23.16 million passengers in the same period. Jet was able to fly more passengers than AI despite having a smaller fleet size of 124 aircraft as compared to AI's 163.