It will be a great boost to air connectivity in the Northeastern part of the country as before Pakyong, the nearest airport to the capital city of Gangtok was around 124 km away in Bagdogra. Nine years after the foundation stone was laid, PM Modi on Monday inaugurated Sikkim's first airport. The Prime Minister arrived on Sunday evening in an MI-8 chopper from Bagdogra and inaugurated the Pakyong Airport, spread across 201 acres. The airport is located approximately 2 km above the Pakyong village.

The first commercial flight at Pakyong Airport will operate on October 4. The first airline to touch Sikkimese ground will be SpiceJet that will operate the Bombardier Dash 8-Q400. SpiceJet will run daily flights between Kolkata and Pakyong. A flight will leave from Kolkata at 9:30 am daily and will return from Pakyong at 11:15 am. There will also be daily flights to Delhi and Guwahati under the Ministry of Civil Aviation's Ude Desh Ka Aam Nagrik (UDAN) scheme. 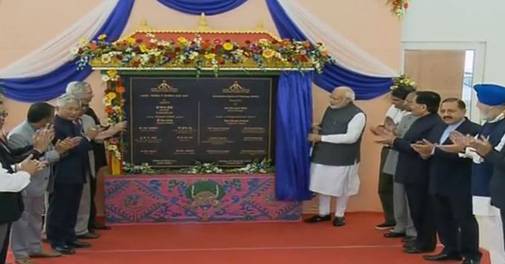 It will be a great boost to air connectivity in the Northeastern part of the country as before Pakyong, the nearest airport to the capital city of Gangtok was around 124 km away in Bagdogra.

Perched atop 4,500 ft, Sikkim's Pakyong Airport is nothing short of an engineering marvel. Built at a cost of Rs 605 crore, the Pakyong Airport will be maintained by the Airports Authority of India (AAI). While a 44-km-long Sivok-Rangpo train line has been sanctioned, getting rail connectivity to the hilly terrain of Sikkim has not been an easy feat. Additionally, the airport has been built with soil reinforcement and slope stabilisation method, keeping in mind its altitude. The airport has a 3,000-sq-m terminal building for passengers, parking for over 50 vehicles, high-intensity runway lights, an ATC tower-cum-fire station and two sophisticated CFT, among other features. Sikkim Chief Secretary A K Srivastava said that at 80-metre height, the reinforcement wall of the project is one of the tallest in the world.

The runway of the Pakyong Airport is 1.75 km long and 30 metre wide. The taxiway is 116-metre-long and connects to an apron measuring 106 metre by 76 metre that can simultaneously accommodate two ATR-72 aircraft. The airport can handle 50 in-bound and as many out-bound passengers. Another special feature of the airport is its strategic location. Pakyong Airport is located merely 60 km from the Indo-China border and is expected to be a boost to the Indian defence forces. The Indian Air Force will be able to land various types of planes at the airport. A Dornier 228 has already been test-landed.