SBI has also announced that it will pick up a 49 per cent stake in YES Bank for Rs 2,450 crore and it also said all deposits and liabilities of the reconstructed bank will continue in "same manner" 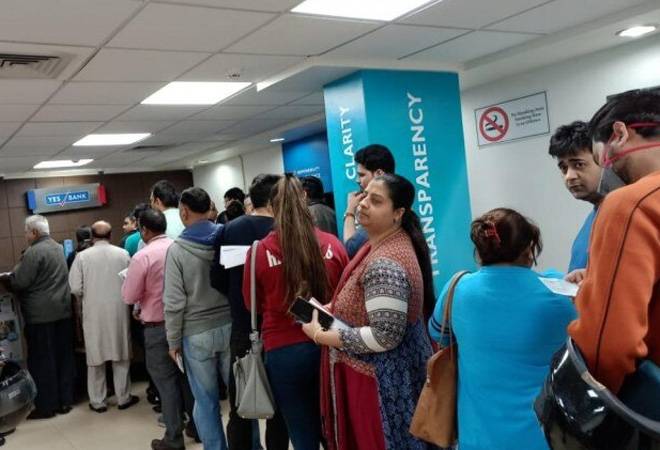 Providing much-needed relief for harried YES Bank customers, the private lender has announced that all its ATM machines are now functional and that its customers can withdraw cash up to Rs 50,000 from them. The lender, in a Tweet on Saturday, said its customers would also be able to withdraw money using debit or credit card at any YES Bank or other bank ATMs now. Ever since the RBI placed cash withdrawal limit worth Rs 50,000 on YES Bank customers on Thursday, people have been facing problems as they queue up outside ATMs to withdraw cash.

"You can now make withdrawals using your Yes Bank Debit Card both at Yes Bank and other bank ATMs. Thanks for your patience," YES Bank said in a tweet. However, no announcement has been made regarding the increase in the cash withdrawal limit.

You can now make withdrawals using your YES BANK Debit Card both at YES BANK and other bank ATMs. Thanks for your patience. @RBI@FinMinIndia

Customers have no option but to stand in long queues outside the bank's branches nationwide since the crisis emerged. Several business owners have also feared that the move would sting their operations. YES Bank has over 1,000 branches across India and has several commercial clients. The crisis-hit Yes Bank, which failed to garner investor support in raising capital, was on Thursday superseded by a Reserve Bank appointed administrator, in consultation with the central government, and customers have been restricted with a withdrawal cap of Rs 50,000 only till April 3.

The State Bank of India (SBI) on Saturday announced it will pick up a 49 per cent stake in Yes Bank for Rs 2,450 crore and clarified that all the deposits and liabilities of the reconstructed bank will continue in the "same manner". The SBI also said that a board of directors will be constituted at the reconstructed Yes Bank comprising chief executive and managing director, non-executive chairman and non-executive directors.