The NPAs in Indian banks started rising from 2012 but the asset quality of scheduled commercial banks turned around after a gap of seven years, during 2018/19, as recognition of bad loans neared completion The asset quality of banks in emerging markets showed a mixed picture, according to a recent report by the Reserve Bank of India (RBI) on trend and progress of banking in India

The global economy has been losing momentum in a downturn that commenced from the first quarter of 2018 in an environment vitiated by escalation in trade tensions, elevated financial vulnerabilities, geopolitical risks and associated policy uncertainties.

The regulatory reforms globally after the global financial crisis in 2008 led to an increase in banks' capital and liquidity buffers. However, their efforts to reduce bad loans and strengthen the balance sheets didn't bear fruits in an environment of low growth and low interest rates.

The monetary policies across the world including in emerging markets (EMs) turned accommodative in order to counter the slowdown and prevent it from deepening.

The asset quality of banks in EMs showed a mixed picture, according to a recent report by the Reserve Bank of India (RBI) on trend and progress of banking in India.

The asset quality improved in Brazil and India but deteriorated in Russia, South Africa and Turkey. In particular, NPL ratios of Russian banks worsened further due to fragile economic conditions and sanctions.

Banks in South Africa and Turkey also experienced deterioration in asset quality as financial conditions weakened. Various sector-specific issues continued to weigh on the asset quality of banks in India.

However, progress in the resolution of impaired assets and various measures to clean up balance sheets, albeit slow, is imparting a stabilising influence.

The non-performing loans (NPLs) eased in most of the peripheral economies of the Eurozone as the process of deleveraging continued, mainly through institutional and government intervention.

"Impaired loan ratios of Greek banks remained the highest in Europe despite asset sales and write-offs. The search for yields in a low-interest rate and low growth environment is pushing banks across the Eurozone to increase their holdings of government securities, although it could also be inducing some degree of adverse selection in loan books. NPA ratio in core Eurozone economies, such as France and Germany, remained at a much lower level with declining trend," the report added. According to the report, decline in the slippage ratio as well as a reduction in outstanding gross NPAs (GNPAs) helped in improving the GNPA ratio.

While part of the write-offs was due to ageing of the loans, recovery efforts received a boost from the Insolvency and Bankruptcy Code. The restructured standard advances to gross advances ratio began declining after the asset quality review (AQR) in 2015.

It reached 0.55 per cent by the end of March 2019 - both in the GNPA and net NPA ratios. The deteriorating asset quality of private banks in terms of the GNPA ratio is due to the reclassification of IDBI Bank Ltd as a private bank effective January 21, 2019.

However, after excluding the IDBI Bank Ltd, private banks' GNPA ratio declined. The RBI's supervisory data suggests that the GNPA ratio of scheduled commercial banks remained stable at 9.1 per cent by the end of September 2019. 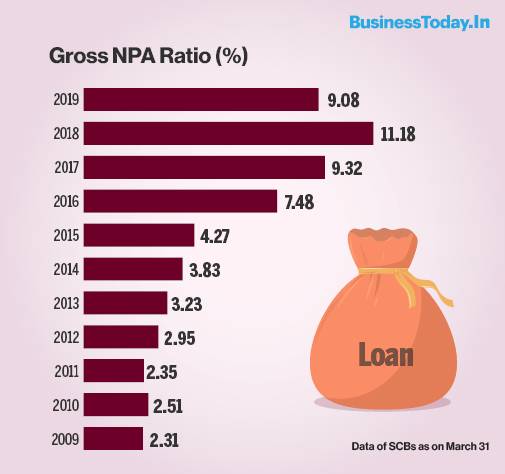 After two successive years of losses, banking sector turns profitable in first half of FY20