ISRO successfully inserted the spacecraft MOM on September 24 in the Martian orbit with five scientific instruments to search for life-sustaining elements on Mars. 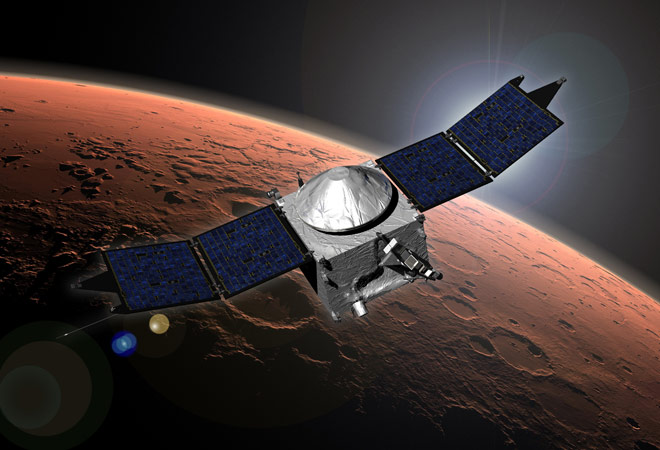 Riding high on the recent success of its Mars Orbiter Mission (MOM), Indian Space Research Organisation (ISRO) plans to revisit the planet in 2018, possibly with a lander and rover to conduct more experiments.

"We plan to launch a second mission to Mars in 2018, probably with a lander and rover, to conduct more experiments for which we have to develop new technologies," ISRO satellite centre director S Shiva Kumar told reporters in Bangalore.

The state-run space agency successfully inserted the spacecraft MOM on September 24 in the Martian orbit with five scientific instruments to search for life-sustaining elements on the planet over nine months after it was launched Nov 5, 2013 from its spaceport at Sriharikota in Andhra Pradesh and about 90 km northeast of Chennai.

"We will be able to take the Mars-2 mission after launching the second mission to the moon (Chandrayaan-2) in 2016 with our own lander and rover, which will help us develop a separate lander and rover for the red planet," Kumar said, ahead of a three-day 'Engineers Conclave-2014' by the space agency with the Indian National Academy of Engineering in Bangalore.

As missions to Mars can be launched only at an interval of two years, the space agency is looking for a slot in 2018 and by which it hopes to have a heavy rocket fully operational to carry a lander and rover with scientific experiments as additional payloads.

"We hope to have fully operational heavy rockets over the next two-three years for carrying communication satellites weighting two-three tonnes into the geo-stationary orbits around the earth," Kumar said.

The space agency has developed the geo-synchronous satellite launch vehicle (GSLV-Mark I-III) with indigenous cryogenic engine to launch heavier satellites weighing more than two tonnes and three tonnes into the geo-orbit at 36,000 km above Earth.

"GSLV-Mark I-III will be used for Chandrayaan-2, which will have heavier payload than its predecessor (Chandrayaan-1) and later for Mars-2 mission, as both will have a lander and rover in addition to scientific experiments," he said.

On January 5, ISRO launched a GSLV rocket with an indigenous cryogenic engine from the spaceport and placed a communication satellite (Gsat-14) in the geo-stationary orbit.

The 475 kg Mars Orbiter was also launched onboard a polar rocket.

The GSLV-Mark III's maiden launch is likely to be in December.