Google Assistant can now help you find your iPhone, even if silent or on DND

Google has enabled Assistant to locate smartphones, including iPhones, through Nest devices. The feature will let users play a customised ring on the phones even when they are silent or on DND. 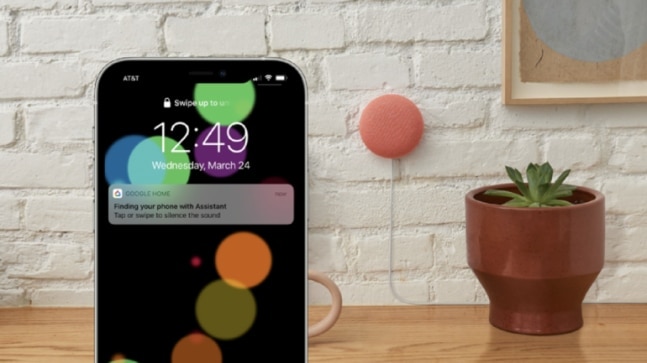 Find my phone on Google Assistant

Google has updated its AI voice assistant with new features. One of these now gives Google Assistant the ability to find misplaced phones using their Nest Displays and speakers. Interestingly, the ability extends to iPhones, meaning iPhone users can now use Google Assistant for the search too.

iPhone and other Apple device users have often used the command "Find my iPhone" on Apple's voice assistant Siri to locate their phones. The update to Google Assistant now gives the same capability over Google Home devices. Though Google points out that iPhone users will first have to allow notifications and critical alerts from the Google Home app.

Google Assistant even has an advantage over Apple's way of locating devices for users. With Siri on connected devices, users can place a regular call to their iPhones to locate them. Google Assistant takes this a step further and will ring the phone even if it is in Do Not Disturb mode.

Google has now shared the feature on its Google Home app on iOS. Once the iPhone users set up critical alerts, they can opt for "Finding your phone with Assistant" notifications. These enable a custom ringing sound on their iPhones to locate it whenever the device is lost.

Google says that the ringing will be audible even if the iPhone is silenced or if DND is enabled on it. As pointed out in a report by 9to5Mac, Apple seems to have granted the Google Home app a special alerts entitlement to bypass the device settings and trigger these critical sounds.

Other than the support for iPhone tracking, the Google Assistant will now help users in placing food delivery orders online. Powered by Duplex, the feature will work on restaurants that appear in the Google app for Android.

To use this, Google Assistant users will first have to make menu selections from the restaurant of their like. The Assistant will then get into action during the final check out process. The AI voice assistant will then automatically navigate the site and fill out the user's contact and payment details saved in Google Pay and synced to Chrome Autofill.

For now, Google has partnered with select chains to introduce the feature to its users. It will eventually expand to more restaurant partners later this year.

Google has also updated Assistant Routines with new triggers. This means that the company's voice assistant will now be able to present a carousel of suggested actions to users on the home screen with triggers like sunrise or sunset.

Vi is giving cashback of up to Rs 60 on unlimited recharge plans, check details