The new iPad has a 10.2-inch Retina display with nearly 3.5 million pixels and a wide viewing angle for immersive augmented reality (AR) experience. It is powered by A10 Fusion chip and will be capable of handling games on Apple Arcade 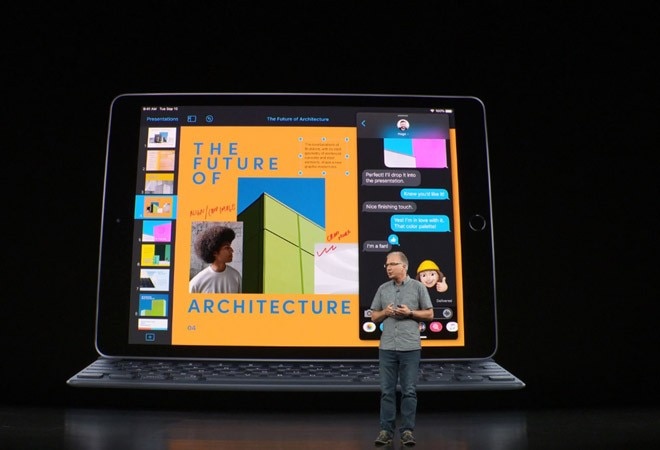 The seventh-generation Apple iPad was the second device to be launched at the Apple Event.

Apple has replaced the sixth-generation iPad with an all-new, seventh-generation iPad, featuring a 10.2-inch Retina Display and support for the Apple Pencil, Smart Keyboard and iPadOS for enhanced multitasking and creative capabilities. Prices for the the next-generation iPad begins at Rs 29,900. The new Apple iPad will be available in silver, space grey and gold finishes, and in 32GB and 128GB memory configurations.

"When we created the iPad, we set out to design something truly unique, a product that you could take with you everywhere and that is so fun and so easy to use. And now with hundreds and hundreds of millions of iPads out in the world, iPad is transforming the way we create, learn, work and play", says Tim Cook, CEO, Apple.

The new iPad has a 10.2-inch Retina display with nearly 3.5 million pixels and a wide viewing angle for immersive augmented reality (AR) experience. It is powered by A10 Fusion chip and will be capable of handling games on Apple Arcade.

Designed to be ultra-portable and durable, iPad's enclosure has been made from 100 per cent recycled aluminium with the same strength, durability and finish as the aluminium in all Apple products. It also features TouchID along with support for Gigabit-class LTE connectivity.

The seventh-generation iPad has been powered by iPadOS which brings new capabilities and intuitive features to the device. It has a redesigned Home screen that will show more apps on each page and the Today View gives quick access to widgets for at-a-glance information including news headlines, weather and calendar events. It also supports working on multiple files and documents from the same app in Split View, as well as switching between multiple apps using Slide Over. Safari also brings desktop-class browsing to iPad with support for popular web apps like Squarespace and Google Docs.

The first-generation Apple Pencil can be used with the iPad to mark up and send entire webpages or documents by simply swiping from the bottom corner of the screen. It has a redesigned tool palette giving easier access to useful tools, colours and shapes.

Even managing documents in the Files app with iPadOS has been enhanced and it now supports external USB drives and file servers.

"The new iPad packs even more value into our most popular and affordable iPad model featuring a bigger 10.2-inch Retina display, support for Apple Pencil and for the first time, the full-size Smart Keyboard," says Greg Joswiak, Apple's vice president of Product Marketing. "The new iPad was built to run iPadOS, which introduces powerful new ways to multitask, manage and mark up documents, use Apple Pencil and view more information at a glance on a redesigned Home screen. This new iPad with iPadOS takes everything people love about our most popular iPad and makes it even better for creating, learning, working and playing."

This has been a huge year for iPad, Apple has revamped entire iPad lineup, starting with the new iPad Mini up to the powerful iPad Pros. Apple also introduced an all-new operating system for iPads - iPad OS, which it claims to be an recognize the distinctive experience of iPad."

Apple TV+ launched at Rs 99 per month, to take OTT industry by storm

Apple Arcade launched for a monthly subscription of Rs 99