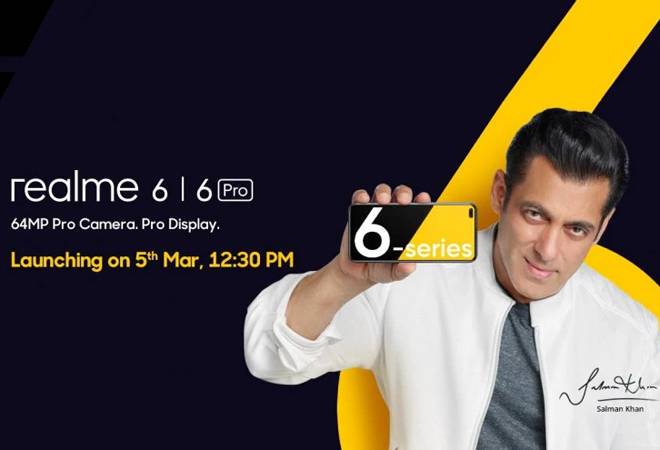 Realme has revealed that their smartphones Realme 6 and Realme 6 Pro will launch in India on March 5 and that Salman Khan will be the brand ambassador for the new series. The company tweeted an image of the Bollywood superstar holding the upcoming smartphone.

The launch event for the Realme 6 will take place at Indira Gandhi Stadium, New Delhi. The ceremony is expected to begin at 12:30 pm.

Realme has also revealed key Realme 6 series specifications on its official website. Regular Realme 6 will come with a single punch-hole cutout front camera while its Pro version will have dual selfie cameras. The rear camera specifications of the Realme 6 are yet to be revealed.

The Realme 6 Pro will come with a 64MP quad-camera setup which will include a wide-angle lens, a telephoto lens with 20x zoom support and an ultra macro lens. The smartphone will have a 90Hz FHD+ display.

Realme 6 series will be supported by 30 W VOOC fast-charging batteries. Both the versions of the phone will run on Andriod 10 based Realme UI.The Realme 6 has passed the Wi-Fi Alliance certification and the IMDA database. It was spotted with specifications such as a MediaTek Helio G90T processor, a 4300mAh battery, and Bluetooth v5.0 under the hood.

Why Satya Nadella wants software developers to broaden their vision