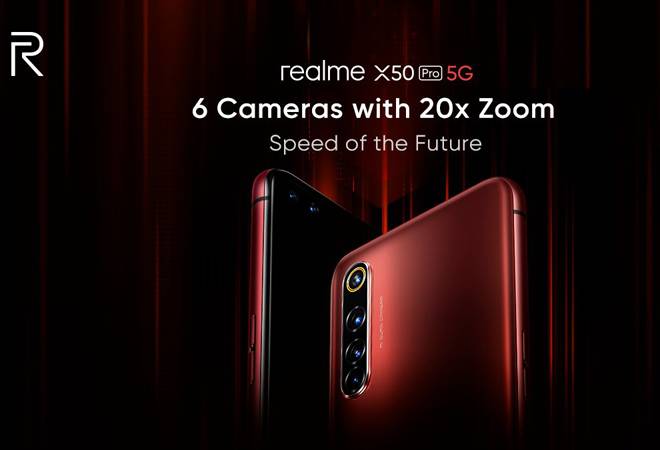 First 5G-enabled smartphone in India, Realme X50 Pro is to launch simultaneously in India and Spain on February 24. The Global Launch event can also be watched live at 10:00 am on the official Realme Europe YouTube channel. Realme X50 Pro's launch event will take place in Delhi.

Realme X50 Pro is said to be priced at Rs 50,000 approximately. The phone is set to be one of the first brands to unveil 5G enabled smartphone in India even though the "network is not available in the country", according to an official. The phone will feature a 90 Hz SUPER AMOLED Fullscreen display.

The latest Realme smartphone will be powered by a Qualcomm Snapdragon 865 processor. Realme X50 Pro will reportedly run on Android 10 and will be packed with 12GB RAM.

The best processor is arriving from the future, the Qualcomm Snapdragon 865 5G which will be in the new #realmeX50Pro#realme5G

The new #realmeX50Pro has 6 reasons for you to look at every detail from a different angle. What's more? 20x Zoom on the #real5G smartphone.

This smartphone will be available in two colours-Rust Red and Moss Green. Although the smartphone is being launched in February, it could be up for sale sometime later as the country doesn't have a 5G network infrastructure currently. TRAI is still working towards floating a paper among telcos to start a 5G spectrum auction process.  According to media reports, 5G is unlikely to be commercially available till the next year.