The Xiaomi Redmi Note 5 Pro promises flagship like performance owing to a brand-new processor, and a camera the likes of which has not been seen on any Xiaomi phone before. 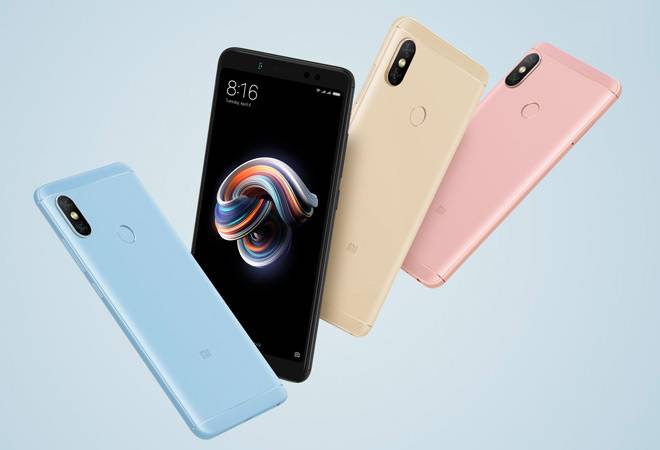 Known for cramming desirable features for a reasonable price, Xiaomi might have outdone itself with the Xiaomi Redmi Note 5 Pro. Flagship like performance owing to a brand-new processor, and a camera the likes of which has not been seen on any Xiaomi phone before, are just the tip of the iceberg with the device that was launched at an event on Wednesday.

Earlier Redmi phones have been all-rounders with a major shortcoming, camera. This year, Xiaomi claims that it has not only improved the camera on the Redmi Note 5 but also made it the strongest selling point of the device. With the new processor and the all new optics, can this Redmi phone actually eat into the sales of more expensive phones like the OnePlus 5T? Let's check the details about Xiaomi's latest and greatest.

The Xiaomi Redmi Note 5 Pro sports a 5.9-inch FullHD+ screen with a resolution of 2160x1080 pixels. It runs a Qualcomm Snapdragon 636 CPU under the hood, coupled to either 6GB or 4GB of RAM. Both variants come with 64GB of internal storage.

The Xiaomi Redmi Note 5 Pro is the first device in the world to feature the latest octa-core Qualcomm Snapdragon 636 SoC. This CPU promises flagship-like performance, courtesy to the Kryo microarchitecture based on ARM Cortex technology. Earlier seen on Snapdragon 800 series processors, this architecture is likely to bring flagship-grade performance to the latest Redmi device.

This flagship DNA and better thermal is expected to boost performance of Redmi Note 5 Pro by 50 per cent and increase battery efficiency by 40 per cent, Xiaomi claimed. Moreover, with its ability to sustain this high-level performance, the Snapdragon is likely to keep the Redmi Note 5 Pro in top order for an extended period of time.

The Snapdragon 636 houses four A73 cores using Kryo 260 architecture, clocked at 1.8 GHz. The rest of the four low-firing Kryo cores can deliver up to 1.6GHz. This much clock speed and performance optimisation makes the Note 5 Pro the fastest Redmi device ever, towering even above its bestselling predecessor the Redmi Note 4.

The Redmi Note 5 Pro also becomes the first device in mid-range line-up by Xiaomi to feature 6GB of RAM. The device is 20-35 per cent more power efficient than its competition as it sports LPDDR4X RAM, the company claimed.

The Redmi Note 5 Pro features tapered back cover with curved edges so that the device sits comfortably in the hand. The corners on the device also come with a slight curve to them, something which has not been seen on the earlier Redmi devices. The familiar antenna lines on the back have been retained from the Xiaomi Redmi Note 4, and so is the circular fingerprint sensor.

What draws the eye on the back of the Redmi Note 5 Pro is the vertical dual camera setup, reminiscent of the one on Apple iPhone X. The iPhone X semblance is tough to miss in the two cameras that have been placed at the top left corner with a LED flash placed between them.

The 5.99-inch screen with 18:9 aspect ratio and minimal bezels dominates the front of Redmi Note 5 Pro. At the top, you get the front-facing camera with LED flash and the usual array of sensors. 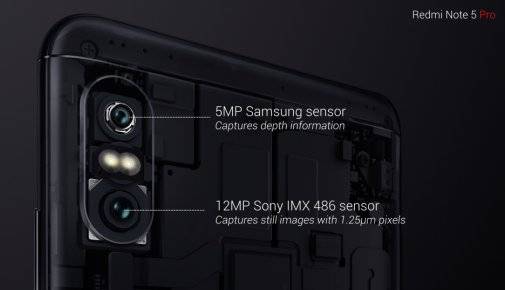 Xiaomi claims the camera on Xiaomi Redmi Note 5 Pro is the best they have shipped in India. The device comes with the first dual-camera setup in a Redmi device. The primary camera is a 12MP shooter with Sony IMX486 sensor, coupled with a 5MP Samsung sensor for capturing depth information. The primary camera on Xiaomi Redmi Note 5 Pro comes with electronic image stabilisation (EIS) for video.

Along with the dual cameras, Xiaomi Redmi Note 5 Pro uses AI-based computing to create bokeh images, to detect the subjects better even in a cluttered surrounding. It will be interesting to see how the primary camera on Redmi Note 5 Pro compares to the one on Mi A1, the first Xiaomi phone to feature a dual camera setup.

The front camera houses a 20MP Sony IMX376 sensor, coupled with soft selfie flash to help with low-light selfie. The secondary camera, even with a single sensor, can take 'portrait selfies' using AI computing, another first for a Redmi device.

Both rear and front cameras feature Beautify 4.0 which have been optimised for India using deep learning. 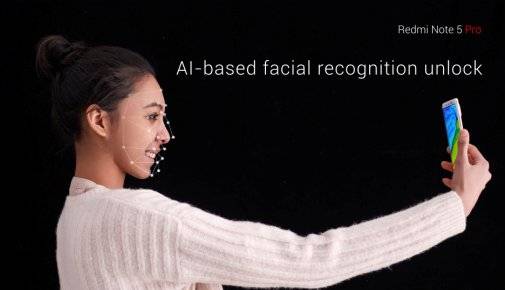 The cherry on the top for Xiaomi Redmi Note 5 Pro will be Face Unlock, which uses AI-based computing. The Face Unlock feature works faster than the fingerprint sensor on the device, Xiaomi claims. The feature will be shipped in March this year through OTA update.