American model and TV star Chrissy Teigen, who was an avid tweeter, has left the micro-blogging site alleging harassment. 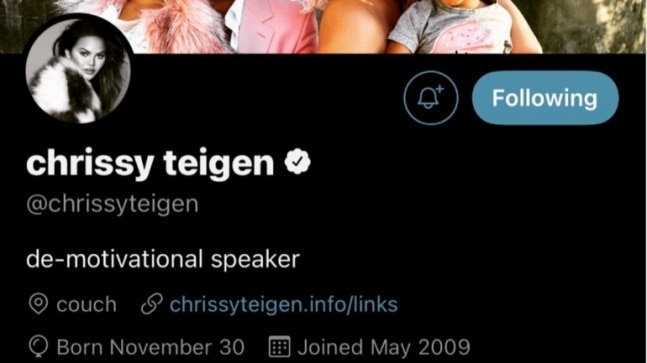 American model and TV star Chrissy Teigen, who was an avid tweeter, has left the micro-blogging site alleging harassment. In a series of tweets, Teigen said that she was served "negatively" by Twitter. The tweets have now been deleted. Twitter had once promoted Teigen as the unofficial mayor of Twitter

Teigen, who is married to singer John Legend, had over 13.7 million followers on Twitter. She had joined the platform more than a decade ago but she was no longer happy with the micro-blogging site. Teigen had chronicled her life events on the site including the miscarriage she suffered back in 2020.

"Hey. For over 10 years, you guys have been my world. I honestly owe so much to this world we have created here. I truly consider so many of you my actual friends. But it's time for me to say goodbye. This no longer serves me as positively as it serves me negatively, and I think that's the right time to call something." Teigen tweeted.

Teigen also wrote that she wants to make people happy. She wrote, "My desire to be liked and fear of pissing people off has made me somebody you didn't sign up for, and a different human than I started out here as ! Live well, tweeters. Please know all I ever cared about was you!!!"

She is known for her witty comebacks on Twitter and her fallouts with famous personalities including the former President of the United States of America, Donald Trump. Post which she was also blocked by Trump, who was later banned from the platform.

However, as much as people loved Teigen's tweets, there were haters too. She was subjected to brutal trolling on the platform and was harassed on and off Twitter. As a result of which, she deleted thousands of her tweets and blocked more than a million users. Although she has left Twitter, Teigen's Instagram account remains active.

Teigen, however, has nothing against Twitter and she does not blame the platform for everything that has happened with her. "I want to say that this is absolutely NOT twitter's fault - I believe they do all they can to combat relentless bullying, any honestly, it's not the bullying!! You guys have no idea how much they've reached out and worked with my team and me personally. It's not the platform. It's not the "bullying". And it's not the trolls," she posted on her Instagram account.