Chinese smartphone brand Xiaomi led from the front, retaining its number one position even though it suffered a 5-percentage-point drop in market share from 31 per cent in Q1 2020 to 26 per cent India's smartphone shipments grew by a robust 23 per cent in the first quarter of calendar year 2021 at over 38 million units, the latest research report by Counterpoint's Market Monitor has said. This was the highest ever first quarter shipment in the country which was boosted by new product launches, promotions and financial schemes, as well as pent-up demand from last year.

"Continuing with its stellar run, India's smartphone market registered a third consecutive quarter of record shipments in Q1 2021, riding on pent-up demand," said Senior Research Analyst Prachir Singh. "Consumer confidence also increased due to the beginning of a vaccination drive in the country." Counterpoint, however, warned that the second wave of COVID, which is stronger and more intense than the first, may dampen demand in the foreseeable future.

"These numbers should be taken with caution as a second and more virulent wave of COVID-19 is currently on in the country and is likely to impact the coming quarters," he added. "The consumer demand will take a hit due to the ongoing COVID-19 wave and subsequent lockdowns."

Chinese smartphone brand Xiaomi led from the front retaining its number one position even though it suffered a 5-percentage-point drop in marketshare from 31 per cent in Q1 2020 to 26 per cent. Still, the company that had lost its pole position in the third quarter of 2020 in the wake of heightened anti-China sentiment in the country, was comfortably ahead of Samsung - its nearest rival. In outright terms, Xiaomi logged a 4 per cent volume growth during the quarter.

In Q3 of last year Xiaomi had seen its share shrink by 3 percentage points to 23 per cent which enabled Samsung to pull ahead for the first time in 2 years at 24 per cent. The lead, however, did not last. As the anti-China sentiment waned, Xiaomi once again pulled ahead in the very next quarter with a market share of 26 per cent. On the evidence of Q1 of 2021, it would seem that normal service of Chinese brands hogging the Indian smartphone landscape has resumed.

The South Korean consumer electronics giant nevertheless registered the largest volume growth of 52 per cent during the period improving its share from 16 to 20 per cent thereby moving ahead of Vivo. Samsung's growth was driven by its focus on the budget segment with the new M02 series and multiple other launches. It refreshed its A-series with the A32, A52 and A72, and the M-series with the M12. It also launched its latest flagship Galaxy S21 series earlier than its normal launch period. After being aggressive on online channels in 2020, the brand attempted to gain share offline.

"The Chinese brands held a 75 per cent share in the March-ended quarter. Xiaomi led the market with a 26 per cent share, followed by Samsung, vivo, realme and OPPO," said Research Analyst Shilpi Jain. "Xiaomi has recently expanded its manufacturing capabilities with new EMS partners, which helped the brand maintain strong shipments during the quarter. All the major brands are focusing on new product launches to drive consumer demand. Samsung maintained a high number of new product launches in its Galaxy M-series, Galaxy F-series as well as the Galaxy S21 series during the quarter."

The feature phone segment too saw a strong 14 per cent year on year growth on the back of strong shipments of JioPhone under its new model and subsequent promotions. Like Xiaomi in smartphones, this segment is also led by a Chinese brand-itel, which had a 21 per cent market share. 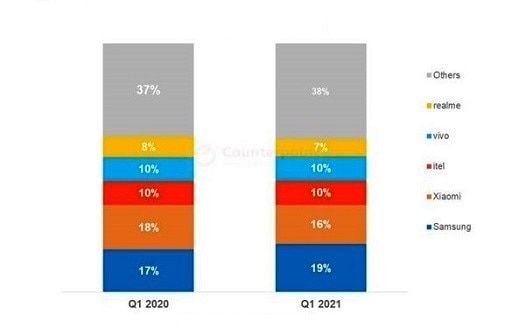