Twitter has been unable to negotiate a new lease with their landlord and is now reportedly in arrears for millions of dollars.

witter has hired Heritage Global Partners, to auction off things from the Twitter HQ.

Billionaire Elon Musk has hit a roadblock in his effort to turn a profit at Twitter, the social media giant he acquired for $44 billion last year. The company is struggling to pay rent for its offices and is facing a mounting debt burden.

The Silicon Valley giant has been unable to meet the terms of its lease on its San Francisco headquarters and has failed to pay rent for the office space since Musk took over the helm of Twitter last year. The company has been unable to negotiate a new lease with the landlord and is now reportedly in arrears for millions of dollars.

Twitter has hired Heritage Global Partners, to auction off things from the Twitter HQ. The title of the whole auction page is: “Online Auction Sale Featuring Surplus Corporate Office Assets of Twitter!”

The thing that is expected to get the most buck is the Twitter bird statue - a regular version as well as a neon light version. Besides that, there are some random office supplies on sale including coffee machines, kitchen equipment, furniture, etc. The 4-feet high Twitter bird statue is currently sitting at a bid of $20,500 or Rs 16,70,000. 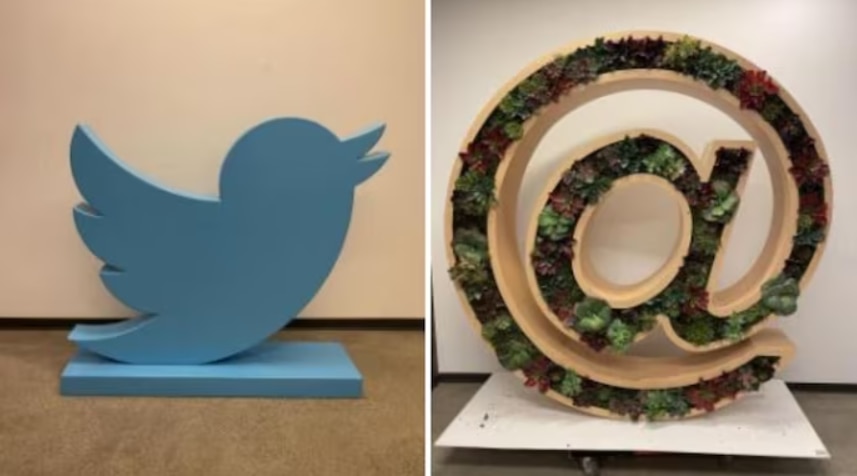 The situation is indicative of Musk’s stewardship of the company. Since his takeover, he has reduced the company to a bare-bones operation, and employees are under a “zero-based budgeting” mandate to justify any spending. General Motors and Volkswagen have paused their spending on Twitter since Musk’s arrival.

Musk has blamed activists for a revenue drop, claiming that they have sought to “mislead the public” and “undermine the business.” He has also sought to find new revenue streams, such as selling merchandise and charging for access to exclusive content.

The billionaire's stewardship of the social media platform has been marked by stress and chaos.

Critics are concerned that Musk will remove important safeguards against hate speech, online harassment, and incitement of violence, and weaken the company’s standards for content moderation.