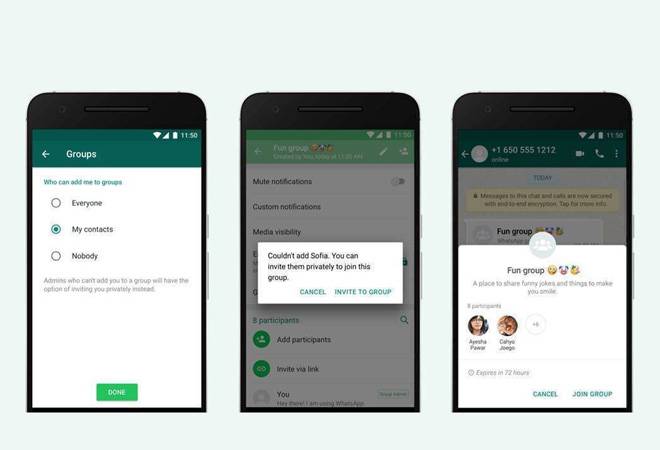 WhatsApp has announced a major update to its privacy settings ahead of elections in India that will let users decide who can add them to the chat groups. Previously, WhatsApp users could be added to any group without their consent. Globally, social media acts as a big influencer, especially during the election season, and a lot of fake news is spread using the WhatsApp chat groups.

"WhatsApp groups continue to connect family, friends, coworkers, classmates and more. As people turn to groups for important conversations, users have asked for more control over their experience. Today, we're introducing a new privacy setting and invite system to help you decide who can add you to groups", WhatsApp said in a statement.

Currently, there isn't much a user can do other than blocking the group admin to avoid being added to a group. But, the new 'Group Invitation' feature has come as a big relief, especially for those who were annoyed by getting randomly added to the WhatsApp groups. The new privacy setting lets the users choose as to who can add them to the group chats.

The WhatsApp users can enable the privacy setting by going to Account, Privacy and Group. Here they can select one of the three options mentioned below.

Everyone: The user can be always added to  the groups. No joining invites will be received by the user from the group admins.

My Contacts: The user can be always added in groups from his/her contacts. However, the user will receive an invite to join a group from people not in his/her contacts list.

Nobody: The user cannot be directly added to the groups in any situation. He/she will receive a request every time someone wants to add him/her to a group.

The invite sent to join a group would remain active for not more than 72 hours, following which the user won't be able to join the group and will have to wait for a new invitation or can use a group invite link. Also, the user won't receive two invitations from the same group at the same time.

"With these new features, users will have more control over the group messages they receive. These new privacy settings will begin rolling out to some users starting today and will be available worldwide in the coming weeks to those using the latest version of the  messaging app," WhatsApp said.

Realme 3 sells 5 lakh units within 3 weeks, next sale on April 9

PUBG addiction: Boy commits suicide after being scolded by mother